A cute, 657cc three-cylinder Kei car roadster isn't, it has to be said, conventional PH fodder. Quirky it may be but even in fizzy turbocharged form the standard Suzuki Cappuccino's 63hp isn't, on paper, enough to even raise an eyebrow. 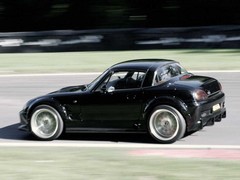 Hold on tight, it's about to get lairy

But does it become of interest if the baby turbo lump is replaced with a mega-revs Suzuki Hayabusa K7 1.3-litre with sequential transmission? Oh, and a GT28 RS Garrett turbocharger, helping it to knock out over 350 hp and 220 lb ft and belt to 60mph in under three seconds, with the ton up in just six and a V-max of 145mph? Worth a closer look then? We thought so...

If you build it...
The car is the crazy creation of engineering and fabrication experts Z Cars, based near Hull. Their workshops are not dissimilar to the secret project room in the new Batman movies. These guys are responsible for bringing to life the mental ideas folk come to them with, and coming up with a few gems of their own. They've been shoe-horning bike engines into cars for decades, and even more silly stuff too. Want a 1,000 hp Nissan Skyline lump and 4WD in a TVR Cerbera, or a twin Hayabusa turbo engined Ultima? How about a 400 hp Carver? They've done it, and a lot more insane stuff besides. If you've got a deranged dream about a car with this mad motor or that trick transmission, they can bring the nightmare into reality, with true engineering genius. 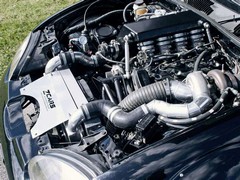 If you can dream it up Z Cars can build it

Take this Cappuccino for example. It was the dream 90s ride for one young lad, who grew up, moved away to work abroad and left his car in his folks' garage. Years later he came back with some money and thought 'I love this car. I know ... I'm going to stick a 350hp turbocharged bike engine in here.' So, he went to Z Cars and rather than laugh at him, the mad buggers built it...

Modest power upgrade
The idea may be insane to many, but the quality of the engineering, craftsmanship and finish is no joke. This is a proper weapon - built by serious boffins who know their stuff.

The Suzuki features a 1,299cc Hayabusa K7 engine, uprated with forged pistons and H-beam rods. And the Z Car boys not only managed to make it fit - along with the paddle shift six-speed sequential transmission and uprated Elite MX200 LSD with a mechanical reverse gear - but have manufactured a load of bespoke parts to make it work perfectly: There's a stunning custom inlet manifold, billet aluminium sump, front mount intercooler and radiator, bespoke ceramic-coated exhaust and one-off cooling set-up. They fitted and set up the Garrett turbo with Tial wastegate, blow off valve and stainless steel exhaust housing and mapped the car on their in-house dyno, using a DTA S60 ECU. They made their own rear sub-frame for the car too, with bespoke CV joints and developed their own spring and damper set-up for it too. No stone unturned... 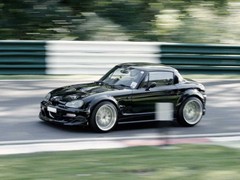 The owner is responsible for the car's Japanese urban street racer aesthetics, fitting a wide arch body kit, with side skirts, rear diffuser, vents and all that jazz and a set of pretty rare Image three-piece split-rims (10-inch at the rear!). But this car is not about how it looks. As with anything Z Cars produce, it's ultimately about making insanely fast, mildly terrifying oddball packages, and this no froth Cappuccino is certainly that.

It's a tight squeeze in the Lilliputian cabin, head scraping against the roof. Turn the ignition and the expectation is for a fizzy three-cylinder to puff and wheeze into life. Instead you're greeted by an electronic ignition that turns and turns and then explodes into a wall of rapidly rising revs. Bike engine cars never cease to amaze. Snick the sequential gearbox into first and another reminder of how different this Cappuccino is slaps you in the face. Draw out the heavyweight clutch and the low-inertia, bonkers revs engine pushes the baby Kei car off aggressively. Then all hell breaks loose. Gears, revs, more gears and more deafening revs and the scenery blurs at an alarming rate. It's utterly insane, completely alien and phenomenal fun. Z Cars - you're certifiable. Good on ya!

The best used Mercedes-AMG cars to buy in 2021