McLaren: the inside story

As statements of intent go the McLaren Technology Centre is a pretty unequivocal one. The brand's core beliefs made physical in steel and glass, the moment you step across the threshold you're instantly immersed in the world of McLaren and hardwired into the firm's way of thinking.

Wipe your feet before you come in...

But recently a few cracks have appeared in Ron's edifice. The transition from a lifelong culture of secrecy - paranoia even - driven by the fiercely competitive world of F1 into a brand with customers, marketing and the need to engage has not been an easy one. Few doubt the achievements - 2012 has got off to a flying start with Messers Button and Hamilton and the MP4-12C is

- but the learning curve has been a steep one. And painful too at times.

And if Ferrari is famed for being emotional (maybe a bit too emotional at times) and effusive the opposite can be said for McLaren. You'll hear a lot of relentless discussion of technology, innovation and the like when the brand's achievements are discussed. But McLaren now has customers, not all of them 100 per cent satisfied. How to deal with this? 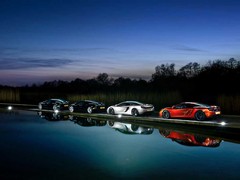 Well, PistonHeads thought it was time to try give the story of the MP4-12C a human face. So we gathered together some owners, ace snapper George Williams, and arranged a very special after-hours visit to the MTC and adjacent MPC McLaren Production Centre.

The opening phase of the MP4-12C hasn't quite been the bump-free ride McLaren would have hoped for. Nor the early adopting MP4-12C owning PHers - Douglas, Andy, David and Robbie - who accepted the invitation to visit the MTC. A factory recall for their cars if you will, but of a more sociable kind. There's been many a thread on the PH forums discussing the ups and downs of the MP4-12C's early life - one alone with 23 pages and counting - but for both the owners and the McLaren folk greeting them this was a very significant moment. 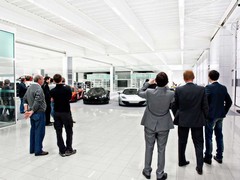 We even wore our suits!

One reflected by the attendance of operations boss Alan Foster, greeting our quartet with the words "meeting the press with the car was nice but you're the guys who pay our wages!" This with a nervous chuckle - warranted given your average McLaren customer isn't lacking in expectation, or the resolve and/or confidence to say as much when it's not been met.

Chatting with our four MP4-12C owners is a revealing insight into the minds of McLaren customers too. And pours scorn on one of the great rivalries conjured up by the likes of us in the world of motoring hackdom - namely MP4-12C or 458 Italia; which would you choose? That three out of our four owners either own or have owned 458 Italias goes to prove how relevant this either/or comparison actually is, other cars among the fleets of our owners including a 599 GTO, Scuderia Spider 16M, various Italias, a Pagani Zonda and a Lamborghini Murcielago SuperVeloce. Several have 458 Spiders on order, one tells of driving his McLaren through the gates of Maranello to pick up his colour-matched 458 (very cool!) while another talks of weighing up buying a Pagani Huayra or holding out for the McLaren P12 while acknowledging that "Veyrons have got so cheap now I should perhaps try one of them." Quite. 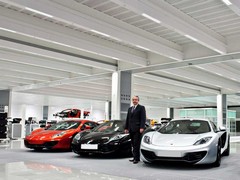 Fantasy garages for many, the realities of running fleets of cars like this are eye-opening, one owner explaining how he chose a black McLaren because he wanted something discrete for the commute, another saying how he'd known his (swiftly sold) R tronic equipped Audi R8 was rubbish in the first hundred yards of driving it. These aren't folk with tolerance for faults, niggles or inconvenience, which makes the well-publicised issues with the MP4-12C (faulty IRIS nav system, truculent doors, random electronic glitches) even more of a worry for our hosts.

Hence the red carpet and charm offensive, our foursome arriving just in time to catch a hurried Ron Dennis leaving for the day. He ain't stopping to chat, throwing a "hope you like the cars!" over his shoulder before jumping into his Merc SL before anyone has chance to reply. 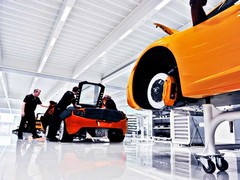 Leaving us in the capable hands of Foster and the McLaren PR team. And once into the MTC it's very easy to get swept away by the cool air of competence and focus. The boulevard overlooking the lake outside is packed with McLaren's racing history and, through full length glass walls, glimpses of prep bays for the current F1 cars are visible, the ragged lumps of melted rubber still stuck to the tyres standing out in the spotless surroundings and a rare intrusion of the chaos of the outside world into the calm depths of the MTC.

Part Willy Wonka's factory, part Bond villain's lair, the MTC is as sterile and steely as you'd expect, an ice-white, brilliantly lit corridor linking it to the freshly completed MPC which, for the world, looks like some Kubrick-esque vision of 70s futurism. 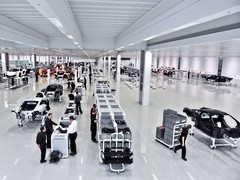 A clean sheet design, in the literal sense

This is Foster's domain and the facts and anecdotes flow with well-practised ease. But his enthusiasm is infectious, the delight as he describes being given a clean sheet on which to design his perfect assembly line impossible to ignore. "It's a big bang moment, a once in a lifetime opportunity," he glows. And then a very Ron kind of OCD geekery creeps in, a directive from above suggesting the factory floor should be 99m by 198m rather than the 100 by 200 Foster requested, Dennis having calculated the floor area of the tiles - including the 3mm of grouting between them - and worked out that this would mean none would need to be cut to fit. Six weeks was taken off the build time as a result.

Foster's not averse to a bit of control freakery either, saying nothing on the factory floor is higher than his chin height, meaning he can see all of what's going on. Not that he needs to, the wrenches at each station registering whether or not each bolt has been tightened to the correct torque and logging that data on the car's electronic build sheet. Changes can be downloaded to each work station and introduced on a car-by-car basis too, McLaren clearly focused on 'upgrade' culture. 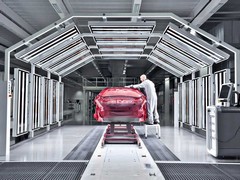 Dizzying stats and remarkable attention to details come in rapid-fire sequence and in the bleached white surroundings - not a speck of dust anywhere of course - it's easy to be swept away. But quiet chat among the owners reveals lingering disquiet, one saying he felt his car "felt unfinished" and though there's still a degree of goodwill towards Foster and his team you sense it isn't limitless.

The inevitable F1 link
Foster has a neat analogy ready though. "When Jenson and Lewis come back from a race - even a successful one like Australia - they have a list of 50 or more improvements they'd like to make to the car," he says. "And those changes are incorporated before the next race." It's a very on-message comparison with its allusions to McLaren's F1 mindset. But will owners tolerate these constant updates - recalls by another name if you take the more cynical view? Foster acknowledges that halting production and calling cars back in October was "a painful decision" but insists the latest cars are bang-on. Among our owners there's recognition that even McLaren wasn't going to get everything right first time, one saying "issues come up and they deal with them, I haven't complained." Another is less generous, saying he felt less an owner and more a guinea pig unwittingly participating in the car's glitch hunt. 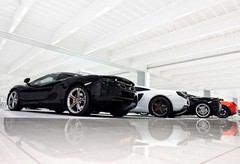 , as happens every time you fire up your PC or iPad. And if the foundations of carbon, aluminium and steel are solid on the car it's this side that needs nailing down if the MP4-12C is to leave its troubled birth behind and flourish.

It had better do too, because this factory is geared up for bigger things than just a single car - Foster boasting of a seven-car line-up using shared components and platform. Lifting the lid just a little on how they plan to do this and meeting the customers they need to convince proves an illuminating experience.

And if a picture's worth a thousand words that's this quota more than exhausted. And time to let the lens of Mr Williams complete the story. Enjoy...

Thanks to all the participating owners for coming along!