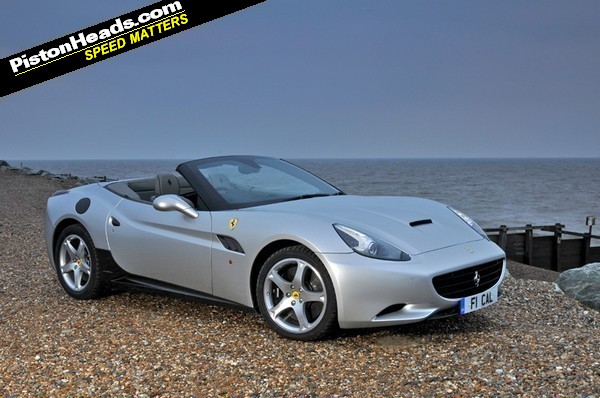 "Oh I do like to be beside the seaside..." To be honest, though, I'd rather the seaside were in sun-kissed California, USA; instead I'm in California, Ferrari, perched atop a wind-ravaged shingle bank at Aldeburgh on the Suffolk coast. In a perfect world, of course, I'd be driving the Ferrari convertible in the American state it was named after, but the cruel cost-cutting culture of austerity Britain has pervaded even the PistonHeads coffers... 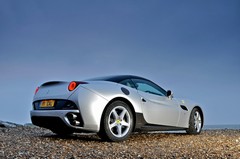 So rather than the West Coast I'm on the East Coast, trading the azure waves of the Pacific Ocean for the putrid-looking swell of the North Sea. Still, it's tough being gloomy when your steed for the day has a gallivanting gee-gee on the nose and 453 of the plucky fellows under the bonnet. Ferrari's California may not be universally admired by hardcore road testers, yet for most of us it has enough charisma, style and furious pace to mark a drive in it as something special. The outside world today, in the throes of bleak British winter weather, may favour a prolonged stay in the comfort of one's bed, but being inside the California, even with the roof lowered and the air temperature lower still, makes you glad of an early morning alarm call.

In the absence of a trans-Atlantic travel budget, the plan is simple: take the Ferrari to a section of the English seaside where the rich folk go - the sort of people who might be able to afford 'our' California's £143,870 base price and then load it with enough options and accessories to raise the final figure to the test car's £212,349. Hence the Suffolk coast, second home to lavishly loaded Londoners.

Part one of today's adventure is to witness the Saturday sunrise at Aldeburgh. In late February... You're right, what am I thinking? Still, the break of dawn - whether or not accompanied by a glowing orb - is mercifully late at this time of year, meaning I don't need to leave home until 6 o'clock. On the other hand, it is bitumen black outside and the family are asleep. At least, they are until I press the California's big, red Engine Start button... 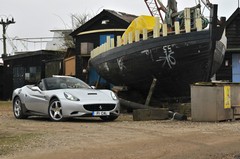 Suffolk's roads are empty this time on a Saturday morning, but with the California's digital info panel informing me it's 0'C outside and a piece of paper in the door pocket reminding me of the car's incredible price, right foot restraint seems advisable despite running on winter tyres. Still, it's a chance to savour the firmly embracing yet supremely comfortable seats, and to observe that while it's all very evocative having an 8000rpm redlined tacho dominating the instrument binnacle, it'd also be good to have a clearer view of how fast you're travelling, especially when you're in and out of 30 and 40mph zones like a yo-yo for the first few miles. 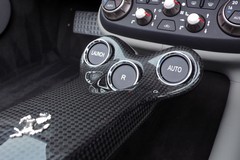 At the forward end of the beautifully sculpted piece of carbonfibre console that divides the seats are three buttons controlling the transmission; one for the automatic setting, one for reverse, the last for the Launch Control that I'm pretty sure I won't be needing today. The Auto button, well, that's a different matter - normally I'd avoid using it, but right now I'm glad to let electronics handle the gearchanging while I look out for the random patches of ice that lurk around some of the corners but not others.

The California is very easy to drive this way, which is why some pundits question its worthiness to wear the Ferrari badge; surely every mile in a motor from Maranello should be a macho challenge? In some Ferraris, sure, but the California, is partly aimed at rich poseurs, for whom leisurely convenience is of more importance than knife-edge dynamics. Enzo Ferrari himself was responsible for plenty of similar cars, so maybe we shouldn't get too upset - if you want to go bonkers, other models are available... 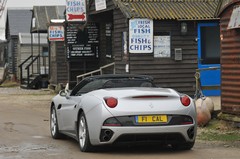 From time to time the California's gloom-piercing, see-around-corners xenons reveal long stretches of dry tarmac and there's a chance to safely floor the throttle. In Auto mode the kickdown could do with being a bit quicker, but the seven-speed DSG-controlled gearbox slips up through the ratios briskly and smoothly. But something's missing - top end tingle. The engine's not sounding fierce enough. Then I notice that the automatic setting is sliding through the change at about 7000rpm, rather than 8000rpm, denying you the full effect of the California's aural attack.

Aldeburgh is still dozing as the Ferrari rumbles down the high street, but dawn is doing its best to shake off the duvet of darkness. At the far end of town the tarmac gives way to a potholed dirt track, and despite its inappropriateness for a 193mph sports car, I want to get the Ferrari along past the landmark Martello tower (a Tudor fortification) and into position on a nearby shingle bank in time for sunrise. 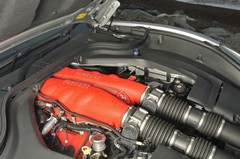 Some hasty pictures in the skin-shredding wind, then it's back down the track to the Aldeburgh proper. Impressively, even with the roof down the California exhibits almost no scuttle-shake, despite the roughness of the surface. And with the windows and wind-jammer up, only the gentlest waft of wind makes it into the cabin; meanwhile the heater seems to be powerful enough to melt the polish on my shoes. In-cabin conditions stay that way even at 100mph.

A visit to the seaside is incomplete without a trip to the fish and chips shop, but neither of Aldeburgh's fryers is yet open for business. Shame, because I'm famished. Still, Southwold, the Suffolk coast's other bastion of wealth and wonderfulness is but a few miles further north, albeit on some dull roads. The sun remains absent, but more people are now out and about as the Ferrari burbles into the hometown of the Adnams brewery. One of the weekenders is in a Ferrari F430 convertible and seems a little miffed that Southwold is no longer a one (prancing) horse town.

A quick sprint down to Southwold's rustic harbour (Long Beach or Malibu it ain't) reveals that Mrs T's superb fish and chips shop is closed for the winter. Damn. But at least that justifies a stop at the Adnams Cellar & Kitchen Shop. Normally I'd find it hard to resist the lure of a p*ss-up in a brewery, particularly as Adnams Broadside bitter is my favourite pint, but with a Ferrari parked outside I settle for a cappuccino and a cake. The California's colour scheme matches the cladding on the outside of the shop, and while I've seen lots of whingeing that this car ought to be red, in my opinion silver suits it better. That said, the optional carbonfibre cladding along the sills and spilling onto the rear wheelarch - which adds horrifically to the price - is a big mistake. 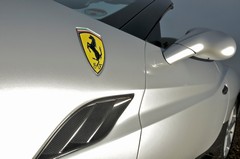 Without the sun, glamour is in short supply at this particular seaside - time to head west, young man, towards roads more revealing of the California's talent for speed and a brief pitstop in my tiny Suffolk hometown of Eye. Numerous routes will take you there from the coast, all of them winding, many of them narrow and bumpy, most of them lightly trafficked; no wonder the biker crowd heads this way in summer.

Flick the 'manettino' on the steering wheel over from Comfort to Sport to loosen off the traction control and give the engine free rein to rev to the red line; prod the Auto button to divest gearchanging control to the deliciously smooth and light (and optional) carbonfibre paddles; grip the very fat-rimmed steering wheel a little tighter; now go... And boy, does it go! The folding hardtop can fool you into thinking that the California is a bit lardy and a kerb weight of nearly 1800kg rather supports that assumption, but as soon as you stamp down hard on the accelerator this thing becomes pure animal. 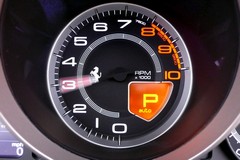 Zero to 60mph is in 3.8 seconds and then it's on to 100mph in about 9.0 seconds: raging performance by any standards. But it's the way the California does this that sears your memory. The flat-plane crank of its 4.3-litre direct injection V8 endows the Ferrari with a crisp-edged, strident soundtrack that might seem a tad clinical if it weren't for the fact that, just beyond 5000rpm where the revs seem to pick up with even greater vigour, it turns to an adrenalin-curdling, ferocious howl. And then, just as all four red shift lights illuminate in a little carbonfibre panel set into the top of steering wheel and you deftly flick the right-hand paddle to shift up a gear - crack! A vicious, explosive crack, like gunfire, which startles you the first time you hear it then intoxicates you every time afterwards. 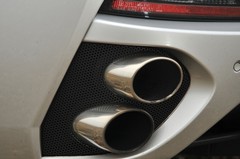 Crack-crack-crack-crack - you just can't help shooting through the ratios at every opportunity. There's burbling and popping and crackling on the overrun, akin to carburettored Ferraris of yore (though probably artificially created), and meaty blips of the throttle as you zip down through the 'box while braking hard into corners. The brakes of the test car are optional carbon-ceramic discs, and though they have a dead-feeling pedal at slow speeds, they really come alive when you hammer them consistently from three-figure velocities.

That's something you have to watch out for with the California - simply going quicker and quicker and quicker; partly because of that magnificent engine, bristling with torque from about 2500rpm; partly because there's so much traction out of corners and such good balance from the chassis and feedback from the steering as you pass through them; and partly because - as long as you don't turn the manettino round to cancel the traction and stability controls altogether - the California inspires such confidence. 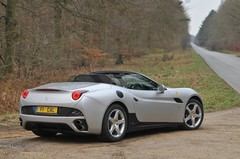 It also inspires wide-eyed, dry-mouthed wonderment from the handful of passengers I give a quick ride to as I stop in at home. "Better than any rollercoaster I've ever been on," gibbers one of my friends as I drop him back at his front door. Pretty much everyone I know also wants a ride, but it's mid-afternoon and what little light there's been is already starting to wane. I trek over the Thetford Forest, just over the border in Norfolk, to a very long, straight and usually deserted road through the pines. 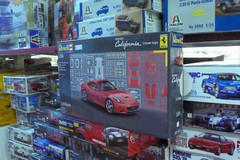 Twilight, and there's just enough time to pop in through the gates of Snetterton to Model and Toy, the self-proclaimed 'World's Greatest Modelshop'. To be fair to that boast, the shop is enormous and overflowing with everything any big kid could ever want. I spot a kit of the California and am momentarily tempted. Yet the real thing is sure to leave such a lasting impression, a plastic reminder seems a little superfluous.