Home/Features/Features/Porsche and the death of steering feel

Porsche and the death of steering feel

Why Porsche reckons electric steering hasn't ruined the 911 and feel and feedback are safe in its hands...

Steering feel. Much discussed, little understood and yet the crux of many a roadtest. Oily, nuggety, intuitive or fidgety - however you like your steering there's a cliché to fit.

And now there's a new cause celebre - electric steering and the supposed death of our cherished feel'n'feedback. When even the new 911, and Boxster not long after, adopted EPAS a watershed passed. 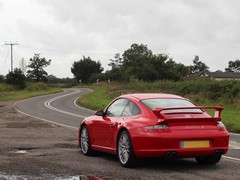 A 997 and a twisty British backroad - perfect!

So how better to accept an invitation to Silverstone for a bit of product and tech indoctrination than hopping into a 997, pointing it up the A413 and savouring what we'll be missing. It's a perfect road for the job too, sweeping, fast corners with good sightlines, occasionally crappy surfaces and some lazy undulations and gradient shifts for good measure.

Time to wheel out those clichés because, as ever, the 997's wheel offers the kind of texture, feel and feedback that we'll apparently not be getting again from a Porsche steering wheel. It's the gentle murmurs and shimmies that tease your palms as the 911's nose arcs through the twists and turns of a classic, flowing piece of British backroad that, for many of us, make the whole Porsche experience so enriching. 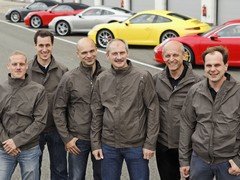 Figuring words like 'nuggety' and 'feelsome' won't cut much mustard with the Porsche boffins I arrive at Silverstone armed with a bit of inside intel from a friendly engineer, and readiness to demonstrate quite how dangerous a little knowledge can be. I've also courted PHers for some questions, Actus_Reus, Ian_UK1, RemarkLima and Fioran0 among those chipping in with questions for the boffins.

And after a couple of hours on the twisty little handling circuit at the Porsche Experience Centre in a succession of 991s and new Boxsters I corner Porsche's General Manager Chassis Development Suspension, Steering and Hydraulic Systems (snappy!) Florian Sprenger and ask him "why have you ruined the 911's steering?" OK, I put it a little more tactfully than that but, regardless, I'm not entirely surprised to discover he's prepared for this. 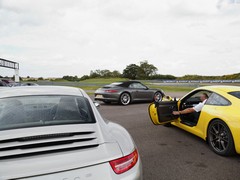 Proving a point, via the medium of 911s

First the 'why' bit. This is fairly easy. First, it's cheaper and easier to install. There's no need for a hydraulic pump in the engine bay, fluid lines to the steering gear (a fair distance apart on a 911 of course) and it's essentially maintenance free. Once you've designed the steering hardware it can be installed in any number of different cars and simply tuned to suit each application, or even variant should you be so inclined - it's all software based so, relatively, easy and affordable. And let's not forget the improvements in CO2 and fuel consumption.

So the engineers like it. And so do the bean counters. But since when have we wanted them to dictate how our 911s drive?

This is just the start
But there's a bigger picture here. Start-stop is in its infancy but likely to expand into engine-off coasting and the need to be hybrid ready means you need power steering that works whether the engine is on or not. Put simply, EPAS is something we're all going to have to get used to, like it or not.

Having accepted that future Porsches are all going to have EPAS how are they going to make sure they still offer the feel and feedback we're used to? 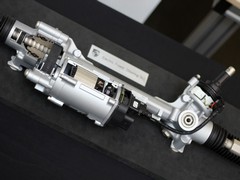 According to my inside man the big issue with EPAS is the inherently greater friction in the system (there are more moving parts) and increased inertia. And as a result the higher frequency feedback to the palm of your hands is masked and you don't have that same intuitive sense of what the front wheels are up to. Worse than that, word has it that Porsche has decided to filter out that higher frequency 'information' with its EPAS system for a smoother feel.

And it's here I enter shaky ground - briefed with my questions I sound (a bit) like I know what I'm talking about. But much as one could learn how to ask 'which way is it to Starbucks?' in Mandarin in no time at all it's naff-all use if you don't understand the answer. 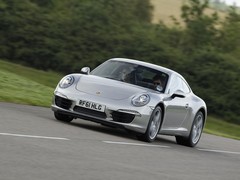 Sprenger's eyebrows flicker but he answers deliberately and in layman's terms. The added friction? He says a good hydraulic system would need 150-200 Newtons of force were one to simply pull the tie-rod. "Initially it was too high," he admits, "so we got the friction down to similar levels."

Top down versus bottom up
And the inertia? "The mass of inertia is higher because you have this huge electric motor that you have to accelerate and decelerate," says Sprenger. "But with our controller, since we are controlling a direct force we are able to compensate; other systems are just tuned to fixed graphs and you always have this much assistance [whatever the circumstances] but we leave the amount of assistance open and control it through our rack force controller." He goes on to say many rival EPAS systems are 'top down', ie, the assistance is calculated through the input torque from the steering wheel. Porsche goes the other way - "bottom up" in Sprenger's words - and uses the wealth of data available through the CAN from steering angle, yaw rate and other information coming through the stability control sensors to vary the assistance and, therefore, 'weight' at the wheel. Developed with ZF, the hardware and basic principles - referred to jokingly as EPAS 2.0 - is something Porsche claims a head start in. ZF will sell it to other manufacturers but, of course, installation, suspension geometry and programming will vary from brand to brand. Fundamentally though it's still a technology in its relative infancy and there's still room for it to develop further. 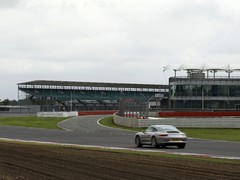 More than a feeling

So there's the why and how. The final bit, the bit that matters to the likes of us, is that less definable 'feel' thing. And in Porsche's EPAS system it IS contrived.

Imagine you were to keep adding steering lock during a constant radius turn with a conventional HPAS or non-assisted system. The rack force increases with lateral G and slip angle but tails off as the tyre runs out of grip - that sickening lightening at the wheel that tells you you're understeering. On its own an EPAS system doesn't recognise this. It simply says 'steering angle x, speed y, assistance force z' and can't 'read' that loss of grip, unless you tell it to. Which Porsche says it does, through that 'bottom up' system and a contrived reduction in rack force to simulate - yes, simulate - the sense of feedback at the wheel. 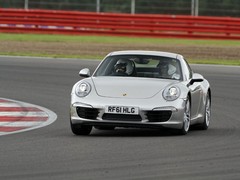 Artificial or not, on-limit feel is still there

And the filtering? The Porsche EPAS 'cleans' out anything above 15Hz, the 'acceptable' range for feedback apparently 11-15Hz. An HPAS system would feed back as much as double that, possibly that intuitive nth degree of 'feel' we all harp on about. To put this into context inputs at the wheel end are typically 0.5Hz, 1.0Hz for a high-speed correction.

Artificially enhanced
So 'feedback' is filtered out and 'feel' is artificially created. But does it matter? Sprenger and his colleagues say no. With a roll of the eyes they point to similar outcry at the introduction of power steering on the 964. "The steering should be in the background and it should be comfortable and let you focus on the main task," says Sprenger. "We found a way to transmit things like road texture, understeer and oversteer these are the critical things the driver wants to feel. What I would recommend is be open-minded, drive it on the track, just be honest - did you miss anything? Did the steering hold you back? I'm pretty confident you would say no."

And pushing a 991 hard around Silverstone's National circuit he's right. It doesn't hold you back. You can sense that limit. The steering is well weighted, instinctive and pin sharp. 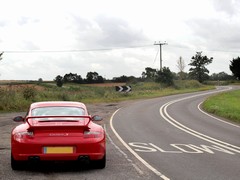 So you can accept his argument and understand why it had to be done. But as the 997's front wheels track the cambers and surface changes of the A413 on the way home and the wheel gently writhes, wriggles and tugs at my hands it just feels more alive and natural. And it took me until now before I even thought to mention analogue versus digital. Over to you...