The Sport 350 badge returns for the first time since the Esprit - is this another Lotus legend? [Vid added] 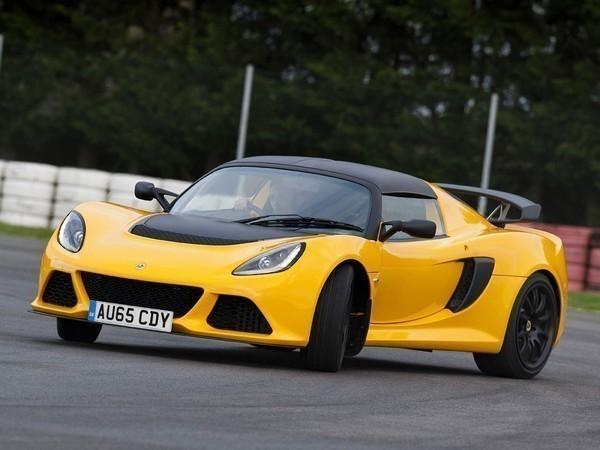 Admittedly the options available to Lotus boss Jean-Marc Gales are limited. But, as policies go, 'make them lighter, make them faster' is one we can rally behind, even if it's effectively little more than keeping the wolf from the door for just a little longer. 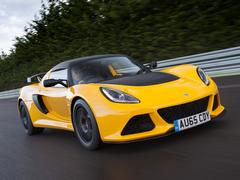 Add lightness and add yellow it would appear!

We'll save the bigger picture for another time. Let's concentrate on the Exige Sport 350. Which is, as the standfirst suggests, a lighter, faster

boasting some very, very impressive performance figures for a relatively modest bottom line. Headline numbers include 350hp, 295lb ft of torque, 0-62 in 3.9 seconds (a tenth quicker for the auto...) 170mph top speed (...8mph slower for the auto), an unladen weight of 1,125kg and a starting price of £55,900. This is a very Gales Lotus; impressive stats to tempt buyers with a weight and cost saving that stay true to both brand values and scrape a little more margin out of each car sold. This all in another successful evolution of Lotus's groundbreaking bonded aluminium platform as recently celebrated in our

We've been burned previously attempting to compare Lotuses to a certain German sports car brand so it's refreshing to be liberated from that by the Exige's impressively unique proposition. It won't match any supercars in vmax bragging rights but, on paper and up to the kind of speeds most sports cars will be driven on road or track, this car will stay on terms with even big-hitters costing three or four times as much. At the other end it'll also more or less keep tabs with the focused track day toys while offering creature comforts to make it a viable everyday proposition. You know, little things like a roof. Windscreen. Doors even. 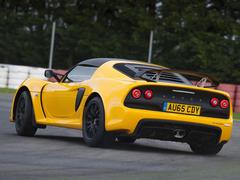 Poised, exploitable and fairly sublime at the limit

Taking 51kg out of the Exige is an impressive display of adding lightness, even if it might surprise you to hear the V6 version was a 1,176kg car as it stood. Faster and more potent than those original four-cylinder cars perhaps. But, relatively, not that light. Gales has talked previously of his policy of stripping cars down to component parts, identifying where both weight and cost can be removed; here that approach really seems to have paid off.

It's been neatly done too. Exposing the gearshift linkage is a geeky touch but one that removes 1.5kg and puts a novelty twist on the pared back cabin ambience; developed for the Evora 400 in that car it's mounted to a subframe, but in the Exige it's bolted directly to the floorpan. Losing the sun visors trims 900g, the Esprit-referencing louvred rear decklid saves 3kg over the previous glass one, 3kg has been taken out of the HVAC piping, ditching the 'engine beautification panel' loses a kilo and so it goes on, the list extending to over 100 components either binned or trimmed. There's a new and stiffer engine/gearbox subframe as well, which is 3kg lighter. You can take another 10kg - unsprung - out of the car by opting for the lightweight forged wheels and composite brake discs too.

OK, so the fact carpets, soundproofing, air-con and a radio are cost options in terms of money and extra kilos demonstrates the Exige remains a hardcore choice. But the simple presence of a roof and windscreen are positively opulent in comparison with some track-biased competition. Indeed, this side of a Radical RXC it's hard to think of a car in possession of these everyday basics that could rival an Exige for combining track-toy focus and all-weather road car appeal. 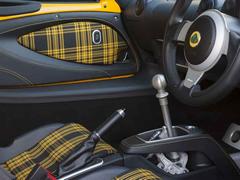 Hardware changes over the Exige S it replaces are detail; the engine and outputs are the same as before, ditto the springs and dampers even if the reduction in weight effectively means they're stiffer, relatively speaking. The chassis engineers were keen to dial out the smidge of understeer that characterised the existing car's turn-in phase and to that end negative camber front and back has been increased and front toe tweaked.

First opportunity to put the claims to the test takes us to a lightly greasy Hethel test track, the V6 Exige retaining that low-speed burliness that sets it apart from its four-cylinder predecessors and the Elise on which it is based. Where those cars fizz and prickle with energy the Exige is gruff and businesslike, the supercharged V6 giving its best to those on the outside in terms of noise.

You're not exactly short-changed from the driving seat though. No four-cylinder Lotus ever combined this much muscle with such little weight and from pretty much any gear the Sport 350 takes off at a rate of knots no rival can hope to match. The supercharger gives the 3.5-litre Toyota V6 the immediate punch of a much bigger engine, this and the lack of mass leaving a revvy, naturally aspirated Cayman feel a little breathless. Nor is there the whoosh-bang lag of downsized rivals like the Alfa Romeo 4C. 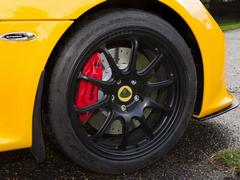 Optional wheels and brakes save another 10kg

There isn't quite the hard-wired sense of connection between pedal and throttle you'd get from an atmospheric engine but the power delivery is linear, broad-chested and never less than thrilling. It's now matched with a gearchange that feels as positive and snappy as you'd hope in a more - whisper it - analogue car like this. This is probably the Sport 350's biggest immediate score over any previous Exige, the click-clack and visible movement of the linkage all adding to the sensory experience. Which, let's face it, is what you want out of a car like this.

Out of duty we take the auto - it's predicted to take 40 per cent of sales, remember - for a quick blast up the road. It reveals itself improved and crisp in the manual mode but still slurring and very torque convertor auto in its self-shifting setting. In the markets that demand such a thing it sells cars to customers who wouldn't otherwise consider a Lotus and, for that alone, the auto merits its place in the range. But the manual has to be the one for the likes of us.

The car we drive on circuit is the full purist option, complete with bare aluminium tub, no radio, the forged wheels and lightweight brakes. And it's mega. There remains just a sense of push as you wind the lock on, leaning against the unexpected weight of that tiny, unassisted wheel. But the rotation from the rear of the car is quick to neutralise it and you can lean hard on the power very, very early with little fear of it going any further. There's no limited-slip diff like the Evora 400, the engineers saying this would undo all the good work in reducing understeer and the brake nibbling electronic one is sufficient. The car rarely feels like it's suffering without, the inside rear only really spinning up if you're greedy with a wet kerb and the throttle over it. 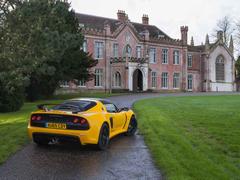 The previous 'nudge' dial for the clever 'learning' Race mode in the Dynamic Performance Management stability control is now a two stage button press from Race to Off. Race is plenty for most track use too, offering plenty of scope for adjusting the line on the throttle and brakes though it still requires an initial lift to start the rotation. When it happens it's wonderfully readable and easy to play with too, the correction coming as a completely instinctive flick of the wrists and an almost slow motion transition into a slide you can maintain or collect as required.

It's so trustworthy even in these tricky intermediate conditions you're happy deploying full power, there being no apparent traps for the unwary, huge traction and lots and lots and of speed. This is a thrillingly rapid car but one that remains friendly, eager to please and totally predictable. In the big stop into the chicane on the back straight AP calipers have a dependably solid feel, the gearbox remaining positive and fun to work down through the gears as you haul it up from significant three-figure speeds.

On the road it's similarly fun. Again, it feels firmer and more tied down than its four-cylinder equivalents, rolling the road flat rather than flowing with its contours. It's still a lesson in steering feel and appropriate damping though, the lack of weight meaning it just floats over the bumps while the nuances of grip through the front axle are felt as tiny flickers in the sinews of your forearms. Contours and white lines are felt through the wheel too but it's nothing like the unpleasant kickback you get in the Alfa 4C. 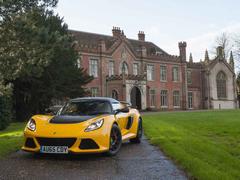 Not revolutionary, but it is excellent

It's so fast any dawdlers are quickly dispatched too, meaning you're never far away from having the road to yourself again and enjoying that very Lotus ability to dissect even the choppiest British tarmac.

When it tries to go up against the big boys with a product like the Evora 400 Lotus will always be the plucky underdog, the inevitable and irresistible comparisons with certain German products shining a harsh light on the touchy-feely stuff Hethel can't hope to compete with. The Exige isn't Lotus trying to be Porsche though. It's Lotus being Lotus. And proving it's still very, very good at it.

A lap of Hethel in the Exige Sport 350