You want a large, fast, all-wheel-drive wagon? So do we. But which one... 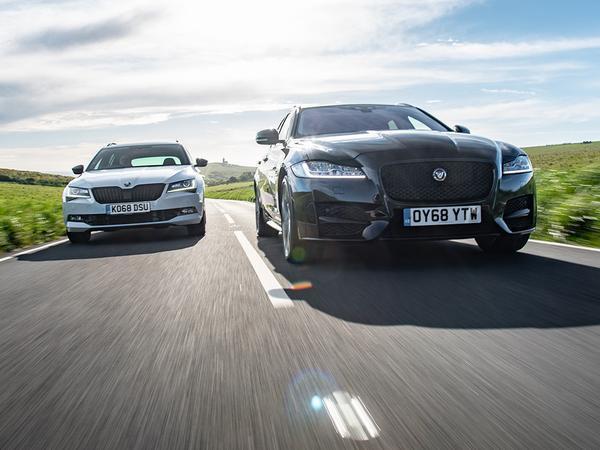 Despite the Sportline Plus representing the very upper echelon of the Superb range, its duty in this test is to prove that less really is more. We've previous with the flagship Superb - 12 months of blissful vicarious ownership, no less - and at no point was there ever any need or desire for more performance, comfort, ability or space. Alright, apart from when the roof rack had to go on. Point being that the Superb substantially overdelivered on quite considerable promise - it's job here is to prove that even more emphatically against a more expensive, more prestigious adversary.

Seriously, though, what value can really be placed on a badge of greater heritage (and a gearbox of another ratio) when the Superb is so comprehensively capable? Drive it for a day, drive it for a week, drive it for year if you so wish, and conjure up something, anything, that it could realistically do better as a brand-new, sub-£40k, 155mph and totally enormous estate car. Because we're still searching. It's a shorter, narrower car than the deceptively ginormous Jag, a car that's moored as much as parked, yet has more space, plus it's cheaper and less powerful yet faster. Nic will bring up something fanciful about image and allure, no doubt, but there's precious little that's tangible for the XF to counter with.

Despite having lost a few hp to the withering effects of a petrol particulate filter - many thanks WLTP - the ubiquitous EA888 2.0-litre turbo endows the Superb with more than a fair turn of pace. Not simply in this comparison - where the weight advantage is in the hundreds, rather than the dozens of kilos, even with someone lighter than Nic driving - but also against costlier foes. A new Audi S6, with its fancy-schmancy diesel engine, will do 0-62mph in five point something seconds and 155mph. For, presumably, quite a lot of cash. No prizes for guessing what the Superb is capable of, and for the price of a 190hp, S Line Ultra A4 diesel.

Don't assume, either, that your swiftly scurried passengers must sacrifice anything in terms of space. If four adults require more room than this to travel, best book them on a cruise. The Superb is vast, a cavernous larder (not Lada) on four wheels that you can just keep throwing stuff in. Again, like the speed with which it will travel, there are simply very few eventualities, surely, in which more will need to be transported than the Superb can handle. Alright, so just the five seats will rule it out as a load-hauler for some, though fortunately that's exactly the same chair count as the Jaguar.

A flaw? There's an impression of money being spent to get the Jaguar up to dynamic snuff that slightly eludes the Skoda - but at no point is the Superb anything less than pleasant to steer or undone by the road surface. And you only need look at the biggest sellers in Jaguar's segment - where it consistently delivers some of the best-driving vehicles - to see how much value the buying public places on ride and handling. The Superb is better than good, making it easily more than enough for any prospective buyer.

That unpretentious yet consummate aura extends to Skoda's driving environment. There are no great surprises or delights, but everything you'd want done well, from smartphone integration to driving position, is without fault. Far better that than an attempt at an interior of great grandeur that the reality can't live up to - right Nic?. In fact, when all is said and done, this is perhaps the Superb Sportline's greatest draw - it's extremely hard to pick issue with, and actually very easy to lavish praise on as a result. That you don't really notice all that it's capable of until it's no longer there shows how easily and effectively it slips into whatever role is required of it, from motorway express to tip run wagon. Expectations are surpassed, assumptions confounded and a point realised - there's no need, and as importantly no desire, for anything much more than this Skoda as do-it-all estate. Whatever Nic thinks.
MB

Is there a more compelling rags to riches story in the last thirty years than Skoda? The Czech manufacturer spent much of the nineties dragging itself from the doldrums common to a formerly state-run carmaker. Lest we forget, at the time its output was a running joke west of the dismantled Berlin Wall, and about as desirable as an annual subscription to the Daily Worker. Now? Well, now we can park its best and most expensive non-SUV next to a Jaguar and credibly ponder which is working harder for its respective share of your hard-earned money.

That is concrete testimony not only to the power of Volkswagen cash, but also its prudent investment in Mladá Boleslav. Any visitor to Skoda's sprawling, storied factory (once the largest in Europe) or its similarly massive facility at Kvasiny will tell you that its Czech workforce defer to no-one - Germans included - in the physical business of building cars. This is why the current Superb feels like it has been nailed together so well: because the men and women doing the nailing really do give a sh*t.

By playing the long game and by being commonsensical and diligent, Skoda's reputation turned a corner long ago - and did it so acutely well that casting aspersions on its badge is a non-starter; not after a decade of it turning granite-like in the minds of right-thinking people everywhere. Nevertheless, when all is said and done, attention to detail and value for money only get you so far in the car selling game (just ask Kia and Hyundai). The latest Superb wagon is an ideal carrier of the modern Skoda gene, no question: upstanding, dependable, practical and very easy to live with. But a genuine XF Sportbrake-beater? No. No way.

Remember what Jaguar was doing in those Favorit years? Winning Le Mans and then building the XJ220, that's what. Then it took Ford's money and, among other things, dashed it against a fabulous looking rock called the XK8. Then, even as it was being ushered out of the door like a stray dog, it managed to conceive and develop and bring to market the original XF. Which was immediately and obviously brilliant. And now, 12 years later, it's even better.

The salient details of the latest Sportbrake 300 R-Sport will probably be familiar: it's an XF estate with the 300hp 2.0-litre Ingenium engine from the F-Type, mated to the eight-speed ZF auto 'box and Jaguar's rear-bias all-wheel drive system. Is it quicker than the Superb? No. The XF is, as Matt cruelly points out, substantially heavier and feels it everywhere. But then the Jaguar is not a puffed up, elongated hatchback; its architecture is bespoke and primarily built to beat out the best executive saloon cars in the world. To do this it has a proper, grown-up chassis: double wishbones to the front with Jaguar's integral-link to the rear, backed by air springs in the Sportbrake. The difference? Night and day. Where the Skoda does a passable job of being a large family car come good, the XF is exceptional even by the standards of the class above.

Its oily synchronisation of vertical control, weight distribution and roll rate won't matter to everyone, sure. But it'll matter to you. Because Jaguar, for better or worse, shrink wraps everything else around its superlative driving experience; it knows no other way. So while you could argue the Superb is better laid out, easier to use, a little roomier and also more practical - its steering is a downed phone line compared to the XF's; its steel suspension a composure fumbler when things get even halfway fast or bumpy or both; and its engine, while admittedly quieter and somehow smoother with a DSG transmission, is still just a turbocharged four-pot with a large estate body to haul around.

If only it were possible to still spec the most expensive Sportbrake with a V6, the gap between the two would be undeniable. It is the lowly cylinder count which inhibits the quickest XF, much more so than it does the quickest Superb. The lesser talent of the latter makes 272hp seem just about right; the more sophisticated chassis of the XF feels like it could gleefully absorb the 600hp gifted to the Project 8. Lowering emissions though, is an external factor and unavoidable; the wonderful thing about the XF's dynamic aptitude is the extent to which it is internally driven by a firm which remembers winning Le Mans and building the XJ220 and still holds both events - and many more like it - dear to its heart. Jaguar would probably make more sales volume hay from a class-leading infotainment system, yet much of its effort is still focused on making on making 'luxury' mean lovely to drive. It's hard to put a dollar value on that kind of approach. Except in this case, where it's £10,595. And worth every penny.
NC