It's the end of an era. The WRX, nee Impreza Turbo, is leaving us. Farewell, old friend...

, Subaru’s decided to can Impreza production for the UK. You can’t blame it, really. In 2012, it sold just 160 WRX STIs, and a staggering 32 of the cooking models. We can wail all we want, but the fact is that the WRX simply isn’t what people want any more. And while Subaru’s talking up its

, it doesn’t sound like there are any plans to bring it to the UK just yet. 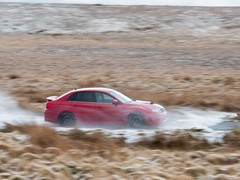 WRX feels at home on a Welsh moor

So it seems it’s time to say goodbye – at least for now – to our friend the hot Impreza, or simply the WRX STI, as it’s become known in more recent years. How best to do this? Well, rallying gave the WRX its reputation in the UK. So it seemed fitting to take today’s WRX STI back to Wales, the home of British rallying, to give it a final shakedown and bid it farewell.

Rain starts play
We’ve classic rallying weather, too. As we head up the A470 towards Merthyr Tydfil, the sky is as dark as the slate roofs either side of the road and constant rain is causing each car to throw up plumes of spray. The motorway miles on the journey here have not been unpleasant, though. The dash is as cheap and nasty to look at as Imprezas of old, but the excellent seats mean it’s not a bad place to spend time. 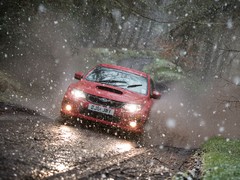 Yep, it's still got it

But it’s when we hit the Rhigos Road between Hirwaun and Treorchy that the WRX’s true character starts to shine. The road’s sodden, but the Subaru grapples along it as though its tyres are fitted with suckers. Even on tarmac streaming with water, there are few things that’ll get you along a twisty road quicker than this. And there's a fascinating amount of adjustability, too, thanks to the central diff. Send more power to the back end for some grin-inducing oversteer, keep it equal if you prefer neutrality, or move it further up front if - for whatever reason - you'd rather have some safe, predictable understeer.

Stage fright
Once we’ve passed through the little town of Cymmer, we decide to try and find the start of the Rhondda stage, as used on the RAC Rally for several years. A spot of research the night before – probably not enough – has revealed that we need to head north-east after Cymmer – but after aiming for a number of forest tracks and finding our route barred by gates or rocks, we realise the search isn’t going to plan. We do, however, find a jolly good water splash, so we drive through it a few times, giggling like kids and pretending to be real-live rallyists. And with that out of our system, we decide to aim the nose further east towards Resolven, another of the RAC Rally stages, via a rough little B-road. 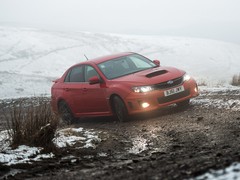 Traction not an issue with adjustable 4WD

The Impreza’s softness was always one of its greatest assets on poorly-surfaced British roads like this, and the current WRX is no different. OK, so the steering could be a bit more engaging, and there’s a touch more body roll than you might expect – but you find yourself perfectly happy to live with that in exchange for the way the car deals with ruts and bumps without jolting itself off line.

It’s the brawny engine that’s always the centrepiece, though. It’s easy to become blase about the Impreza burble if you’ve heard a thousand of the things puttering past with drainpipe exhausts hanging off, but on a charge, the sound of a turbocharged boxer at maximum attack is still magnificent. Wind it up, and the whine of the turbo overlays a snarling, grunting ululation that rises in urgency with the revs. And the wallop it delivers is heavier and more addictive than ever before. In combination with the four-wheel drive, it’s devastating. Plant your foot and there’s no drama; no scrabble or tug. The WRX just bolts off down the road. 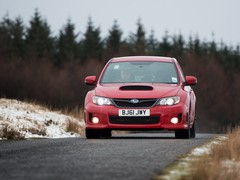 Our hunt for the Resolven stage proves... well, unresolved, if you'll pardon the pun. At one point we come across what we think might just be the start – but of course, there’s nothing there to confirm it to us either way. By now, the light is fading, so we rattle off a couple of shots for posterity and turn back towards home. As we climb up over the hills for the last time, snow starts to fall, thick and fast, and soon we’re making tracks through an unbroken white carpet. In most other performance cars it’d be slightly unnerving, but at no point does the WRX ever feel anything other than reassuringly stable. It just serves to reaffirm the superb breadth of the its talents.

There’s no place for the WRX in the UK in its current form. Sales figures have made that clear. Whether it’s because of its thirst or the lack of any parallel motorsport activity, whether it was initially priced too high before a recent £5,000 cut, or whether people were turned off by the hatchback iteration that preceded the current saloon and have never returned, it’s hard to say. And yet, the reasons for which it was so successful in its heyday haven’t gone away. It still offers an awful lot of bang for your buck. And it still delivers practicality, power and all-weather usability in spades. It still has the same downsides, too, but they never really stopped it before. We can only hope, therefore, that this isn't the end of the line for the WRX in this country, and that one day Subaru will bring it back, fitter and stronger than ever before. But for now, it’s with a genuinely heavy heart that we have to bid this old friend farewell.