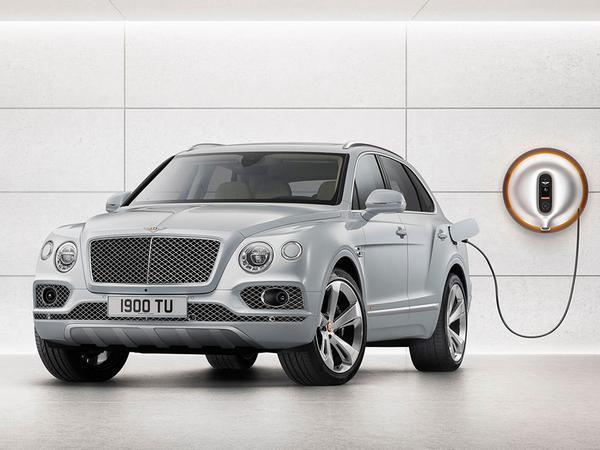 First it was a

, then a V8 petrol - now Bentley completes the Bentayga lineup with turbocharged 3.0-litre V6. With an electric motor attached for good measure. Yes, that's right: Crewe has built a hybrid - and its most efficient model ever, with a kindly NEDC rating of 75g/km CO2.

The same test cycle says you'll get over 30 miles of electric-only range from the car that Bentley claims as the world's first luxury hybrid (bear in mind there that Crewe doesn't think anyone aside from Rolls-Royce lives up to its standard of 'luxury').

"The Bentayga Hybrid is our first step on the road to electrification," said Adrian Hallmark, Bentley's chief executive. "It gives customers the best of both worlds - engaging, effortless performance on the open road and silent emission-free driving in the city, which will become increasingly important with the ever-changing regulations around the world."

Needless to say it's the last bit which has ultimately required Crewe to hold its nose and install a hybrid powertrain in its powerhouse SUV. Fortunately for it, the Volkswagen parts bin includes some of the best in the business, and you won't be surprised to hear that the Bentayga's vital components are shared with the Porsche Panamera 4 E-Hybrid.

So while Bentley didn't deign to share the car's vital statistics with us at the time of writing, we can say with some confidence that it'll deliver much the same 462hp that the saloon does, the bulk of it coming from the twin-turbocharged V6.

The electric motor is upstream of the eight-speed automatic gearbox, so it'll feed the same all-wheel drive system (rather than it being stuck on the back axle). With its help, expect the Bentayga to deliver around 516lb ft of torque from just above idle.

As with most VW Group hybrid systems, you'll have the option of three E modes - EV Drive, Hybrid Mode and Hold mode to manage battery life. Expect that battery to take around 7.5hrs to charge from a standard domestic supply - or 2.5hrs if choose to have Bentley fit a Philippe Starck designed Power Dock installed at your house.

There's no price for the car just yet as it isn't due to go on sale till later this year, following its public reveal at Geneva tomorrow. More information to follow then...