Three years in the making, RML's new 250 GT-inspired supercar is an engineering marvel 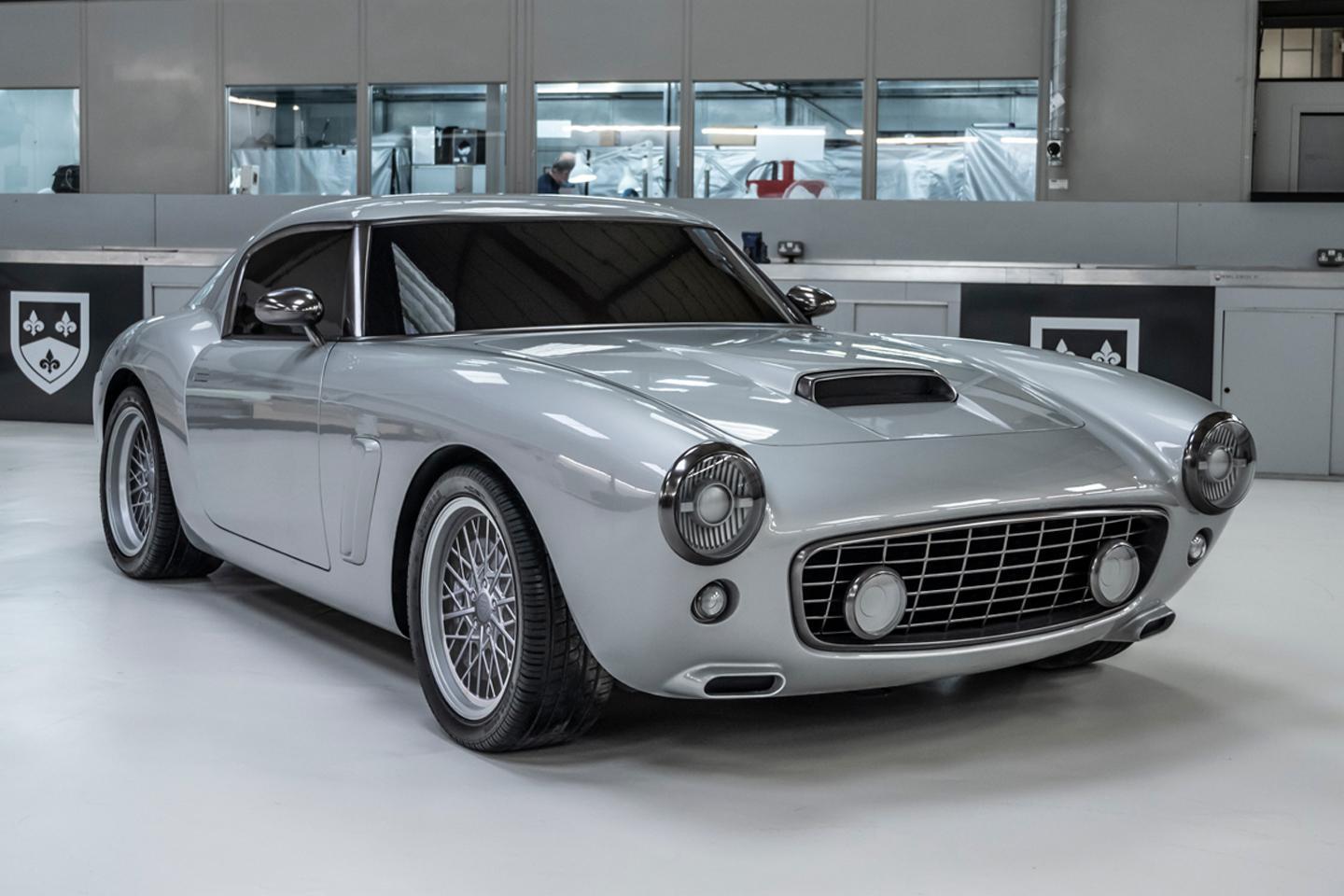 Did you know that 90 per cent of what RML does is a secret? That’s a rhetorical question. Because while the British engineering firm is famous for its achievements in motorsport, racing only makes up 25 per cent of its business these days. The other 75 per cent is in defence, EV tech and, as explained by CEO Michael Mallock: “developing full cars and builds for bleeding edge electric hypercars, but we can’t talk about that as it’s all secret”. As he shows PH around the 60,000 square-feet (and soon to be 90,000 sq ft) RML Group facilities in Wellingborough, the sheer diversity of projects is clear enough. But so is the passion for motor racing, thanks to the multitude of trophies mounted on shelfs and tabletops about the place.

But we're here to see the Short Wheelbase, the 30-unit run of £1.3 million cars built using the innards of a 550 Maranello that have been comprehensively re-engineered into something new. Make no mistake, this is a ground-up rebuild in the most extreme sense, with the base used largely to prevent RML having to go through the complicated process of new car approval in each global market. According to the regulatory paperwork, this is a redressed 550, but by every technical measure, the Short Wheelbase is a new car. A mix of 250 GT-inspired styling and excitement, with 21st century usability and motorsport-grade engineering throughout.

“We thought about basing the car off an 812 Superfast, but that didn’t last very long,” says Mallock with a smile. “We wanted to find the sweet spot for rawness and on-road performance, where you can really enjoy the V12 engine and not instantly be doing three-figure speeds, and we found the 550 to be the perfect positioning for our car.”

With a 5.5-litre V12 producing 492hp at 7,000rpm mated to a six-speed manual with an open-gate, the underlying recipe is certainly tantalising. And while RML isn’t bothering to extract more power from the block – although it will, of course, fully refurbish both engine and ‘box – the twelve is liable to feel a whole lot more extreme thanks to the significant weight reduction made in the Short Wheelbase. A standard 550 weighs in at 1.7 tonnes; RML’s creation will tip the scales at 1,470kg dry, so even with a full tank you’re looking at a big growth spurt in power-to-weight, with roughly 320hp per tonne at the kerb. Calculations suggest the car will be good for 4.1-second 0-62mph sprint time (including a manual upshift) and 185mph top speed.

“This isn’t a Top Trumps car chasing numbers,” emphasises Mallock. “We want this to be rewarding on the road even in the wet, so you can drive to Goodwood and not feel like you’ve just done Le Mans. We’re developing every single detail in house, which means we can design our own solutions, like door seals, hinges and window drops. The Short Wheelbase body can’t whistle at 70mph; it affects perceived quality.”

To ensure that, and to help RML’s chief designer, Jonathan Bowen, get the design close to ready from the start, the engineers first developed a prototype bodyshape digitally. But when this shape was then produced in a clay model, both Bowen and Mallock agreed the lines weren’t quite perfect. Millimetres were shaved and added all over the car during “11pm meetings”, creating a more visually cohesive result which was then scanned back into CAD and tested with computational fluid dynamics up to a simulated 200mph. Handily, the bodyshape lends itself nicely to the car’s required performance, not requiring any spoiler on the rear to reduce lift “like the Mk1 TT”, notes Mallock.

The 550 architecture adds a fair amount of width to the 250-aping profile, but it’s still instantly recognisable as something that reimagines the  berlinetta’s design. There’s plenty of additional functionality plumbed into the carbonfibre body panels, with the lower bumper openings enabling the retention of 550 brake cooling, the bonnet scoop helping RML’s enhanced engine cooling hardware work optimally and the side vents there to let heat escape from both engine and gearbox. The car’s underside is also shaped to ensure cleaner aerodynamic performance, leaving the shape on top smoother. Bowen’s blending of 250 lines over a platform with 1,632mm tracks and 18-inch wheels is impressive enough; the to-scale clay model has serious presence.

The aggression is appropriate, too, because RML’s engineering work takes the 550’s spaceframe chassis and adds rigidity from front to back. A Maranello’s skeleton sits beside the clay Short Wheelbase in the RML workshop during our visit, as it’s going to be the base for ‘Car Zero’, so PH can see the work to be done first hand. The spaceframe itself is actually being lightened thanks to the addition of the rigid carbon body, which appropriates some structural requirements from the chassis. RML expects the combined platform to be much stiffer, with greater refinement and comfort as a result. The Short Wheelbase is to be a high performance grand tourer, although Mallock did confess to having track day’d another 550 so as to expose the platform’s weak points at high speed.

That said, thanks to the weight loss and ground-up improvements made to the base, RML’s creation will stick with steel brakes, as carbons aren’t needed. The tyres, too, will be an off-the-shelf performance option, so as to avoid owners having to specially commission remakes of a bespoke boot in the future. Mallock doesn’t want to follow the likes of Bugatti and require customers to fork out over £6,000 per tyre down the line. Additionally, thanks to the unmodified engine and gearbox, servicing will be no more demanding than a typical 550, a car that specialists reckon to be reliable enough. In the standard car, Ferrari asks for a service once a year or every 12,500 miles. Not bad.

Nevertheless, this is clearly going to be an exotic machine, with every engineering detail having been painstakingly developed specifically for the Short Wheelbase. Take the wipers, for example, which went through 30 design phases and at one point used a three-blade system. RML settled on a more conventional, but still bespoke, two-blade setup, which tucks under the bonnet line when off for aerodynamic efficiency and, of course, better aesthetics. In fact, everything you lay your eyes on has been developed to mix functionality perfectly with form, and no clearer is that than in the cabin.

PH got to sit in the ‘interior buck’, essentially a mock-up of the cabin that’s to scale, and without getting ahead of ourselves, it felt, well, perfect. The positioning of your torso in the platform (which, by the way, is closer to the car’s centre to clear space for the curving roofline), the angle of lumbar support and the reach to all controls has clearly been well thought out. Bowen and his team used both the tallest RML employee of six foot four – handily it’s Mallock – and the shortest, who’s five foot one, as the extremes to cater for, when they’re wearing helmets. And the result is a cockpit that places you low, with lots of headroom and a commanding view out to the bulging bonnet lines. While there were no mirrors fitted to the buck, it seems inevitable that the rear arches will be in full view, which should make placing this car on the road an easy process.

“The view through the double-curved windscreen and surrounding glass is actually wider than the 550’s,” says Bowen. “We wanted to make sure that all controls were in easy reach for the driver, while keeping the dashboard design clean.”

It certainly looks to nail the brief in the buck, with the finished car getting a digital display that’s fully retractable, so as to “keep the vintage look people want”, according to Mallock. The system will feature all the modern essentials, including Apple Carplay and Android Auto, as well as sat nav, but those who prefer a more traditional experience can leave it hidden. RML is fashioning all of the car’s buttons and controls, ensuring they feel appropriate to the package, and it’s creating a bespoke keyless entry system. The cabin even gets two cup holders.

RML engineers are also developing the traction control and electronic stability control systems in house, promising that they’ll be much smarter than the 550’s comparably primitive tech. For those wanting the most exhilarating ride, the electronic nannying systems can be fully switched off at the touch of a button. Mallock – who actively races a collection of vintage single seaters with his father, RML founder Ray Mallock – promises easily controlled performance if they are. He wants the Short Wheelbase to be a car that’s flattering and enthusiastic, not out to beat you. And he wants the car’s buyers to be keen drivers who will actively use their seven-figure machine. Indeed, apparently several enquiries have come from customers who already own an original 250 and want a more forgiving car for regular use. These people already know what RML is about.

“We see the Short Wheelbase as a way to demonstrate our engineering talents,” explains Mallock, as he walks us around the facility past cars we’re not legally allowed to mention in this story. “We’ve done so much, like completely developing the 700hp three-cylinder hybrid engine of the Nissan Zeod Le Mans car, giving GM its first win in the WTCC with our 2.0-litre motorsport engine and now, we supply BTCC teams with subframes and control components. We build electric hypercar batteries and the vintage continuation cars of other brands alike, and much more. But few people outside the industry know this.”

It’s true. RML is a name you’d quickly spot in a racing paddock, but you’d be hard pressed to find a person on the street who's heard of it. The Short Wheelbase is a chance for engineers to not only wrack their brains finding solutions for a challenging product, but also show off to the wider world their level of expertise. Nowhere is this clearer than in the timeline for production; RML had been developing the car for three years before it announced the project, so it expects Car Zero to be on the ground by October. The company isn’t even taking deposits until it’s completed the first example. The world certainly isn’t short of restomod offerings, but it’s clear from every angle that the Short Wheelbase is like nothing else out there.