In which an 800hp, two-wheel drive Ferrari meets the UK during a very cold winter snap... 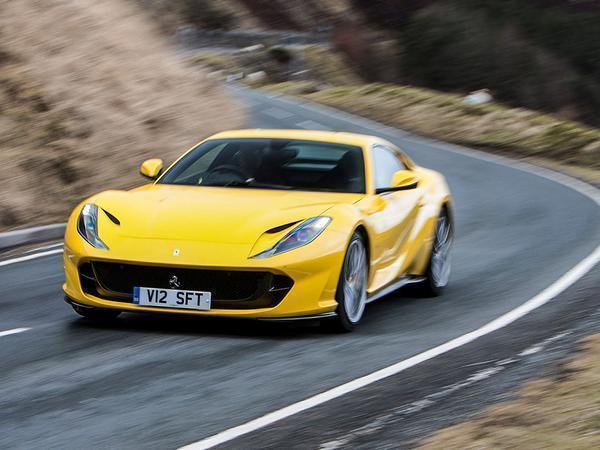 Ferrari, 800hp, 12 cylinders, Superfast. Even drawn out to its most verbose, the name given to the F12 replacement sounds as absurd as it does wonderful. Perhaps even more so because it forces you to focus on that ludicrous power output. Just think, not so long ago the 355 name was about 3.5-litres and five valves per cylinder...

And while the changes from F12 to 812 are far more wholesale than you might expect, it's worth beginning with that engine. Because who doesn't like talking about Ferrari V12s? Still based off the block of the Enzo (which was a 6.0-litre), the 812 takes the F12's capacity from 6.2 to 6.5-litres thanks to a longer stroke of 78mm (the bore is as large as it can be, at 94mm. Remember the difference between those two). Alongside extensive intake tweaks and 350bar direct injection - a world first for a spark injection engine - power is up 60hp to the big eight double-zero (which means 123hp per litre) and torque climbs to 530lb ft from 509. You'll need 8,500rpm(!) for the power peak, and 7,000 for maximum torque, although 80 per cent is available from 3,500rpm. The exhaust has been tweaked for a "strong and smooth" sound in the cabin at all times.

You may well know those facts already, but they are worth repeating if only to emphasise just how barmy they are. AMG and BMW M have been forced to adopt four-wheel drive with 600hp; this Ferrari has a Fiesta ST more power going to its rear P Zeros. A 400hp Audi RS3 feels very fast and this has twice the output. In fact, it has the combined power of a Civic Type R, a GT86 and a Lotus Exige in one car. To reach 62mph takes just 2.9 seconds; to double it takes just another five...

But this 812 is about so much more than the power, even though that may be hard to draw your attention away from. It's the first Ferrari to be fitted with electric power steering, which works in conjunction with the second generation of Virtual Short Wheelbase, the company's take on four-wheel steer. Part of the EPAS debut also includes Ferrari Peak Performance (FPP), which adjusts the steering torque to give the driver a sign of the impending grip limit, and Ferrari Power Oversteer - you thought Side Slip Control (in its fifth generation here, since you ask) was exciting... FPO, as the cool kids know it, "will give the driver feedback to give steering wheel inputs that are coherent with realigning the car correctly." But, and this is important, "The driver remains the key to the driving experience." So it's Ferrari actively encouraging controlled oversteer in its V12 flagship. Tremendous.

In addition to that there are ceramic brakes from the LaFerrari (improving braking performance from 62mph by 5.8 per cent), yet another rework for the dual-clutch box to make shifts 30 per cent quicker, and shorter ratios - by an average of six per cent, says Ferrari - to add further intrigue. Then we're into the aerodynamics...

Well, kind of. We could attempt to explain which bits are active mobile aero and which are passive mobile aero, tell you that the trailing edge of the rear spoiler is 30mm higher than on an F12 or even disclose the 12 per cent improvement in downforce from the diffuser. But we won't. Because Ferrari has a

dedicated to it on YouTube, and it will do a far better job of explaining how it's the most aero efficient Ferrari V12 sports car. Onwards...

If this car does indeed represent the end of Ferrari V12s without any kind of assistance, then what an epic farewell. This is without doubt the most exhilarating, most incredible powertrain on sale today; of course you would be well within your rights to expect that at £300,000, but it's really in a class of its own. 911 GT3s, Huracans, McLarens - even Ferrari's own 488 GTB - all rank as second fiddle next to this majestic V12. It's everything.

It can play smooth and docile, bimbling around town with minimal effort and even less drama. At one point it was going uphill at 18mph in sixth gear, without fuss. It'll cruise, although those shorter ratios do make it a bit busy. And yet the 812 will also howl to 8,900rpm with such unparalleled savagery it's difficult to comprehend (though that relatively short stroke will help). How a 6.5-litre V12 can spin with so little inertia and so much wanton aggression is as baffling as it is bewitching. The noise is wild enough to make an Aventador seem meek, the speed beyond the realm of anything beneath the Holy Trinity and the gearbox simply fabulous. It's as involving, as rapid and as good as dual-clutchers have ever been. So it's brilliant.

And you know what's more brilliant? It's not too much. Well, not always too much, but we'll come to that. In the right scenario, the way in which the 812 actively encourages its driver to use 800hp (and quite happily contains it) is quite extraordinary and, to be honest, just really bloody thrilling.

Sure, the SSC, FPO, CST, SCM-E and everything else will play their part, but the 812 puts the driver right at the centre of things and makes them feel like they're genuinely achieving something in this 220mph lunatic - it's a very neat trick. So when you go to CT off (because the car engenders such confidence) and have to apply just a few degrees of corrective lock, everything conspires to make you feel like the superstar in the 800hp Ferrari. Even if it perhaps did quite a lot of that.

Without an F12 along for comparison (one can but dream), it would be hard to draw affirmative conclusions about the substitution of hydraulic steering for an electric rack. However, it retains that super sharp Ferrari response and relative lightness that now characterises the brand; once keyed into it, there are no problems at all. Indeed, the car operates at such a frantic, hyperactive pace that you as the driver almost raise your own game to try and match it - this is not something to relax in. As for the four-wheel steer, so derided in the F12 TdF, that it couldn't be noticed here is probably the best praise. It felt natural, presumably only adding to the 812's freakish agility. Dead handy when parking in Kensington, too...

We're getting to the nub of the 812's appeal here; apologies for the delay, but hopefully you'll understand a scene was there to set. Thanks to Ferrari's incredible acumen and expertise, this 812 Superfast feels a well-sorted, exploitable, adjustable, engaging, front-engined, rear-drive sports car. With eight hundred flipping horsepower. It's not easy, far from it, but this car is so much more drivable than you might expect. And while the car isn't small, neither is it ridiculously large: a width of 1,971mm is 29mm wider than a new Aston Vantage, and a length of 4,657mm makes it 24mm longer than a 3 Series. It can work in the UK.

Well, most of the time. Even with the fabled 'Bumpy Road' damper setting selected, the Superfast is not at home on a B-road. As well it shouldn't be, you might convincingly argue, but it still feels worth reporting. It never quite settles in the way a 488 might, the 812's frenzied and slightly deranged character making it fidgety, a little abrupt and frankly quite intimidating. Still, just don't drive it hard on B-roads, right?

Because the fact that a Ferrari V12 flagship is always a bit scary even when the road levels out, doesn't suit every situation, and can't just be understood in a day is a thing to celebrate. Supercars should require the very most from their driver and then deliver the very greatest thrill on four wheels - it's a conundrum that Lamborghini can still struggle with, and Ferrari has absolutely nailed here. Where the genius lies in the 812 is that it's not an obstinate or recalcitrant supercar; rather it demands the very best from you to get the very best from it, even with the car's assistance, and that's an addictive challenge. The balance struck between engineering wizardry and old fashioned supercar excess has created something sublime. This car has to be one of the most, if not the most, vivid, thrilling, extreme and downright desirable series Ferraris ever produced, at a time when it looked like supercars might have to calm down a down a bit - that makes the Superfast very, very special indeed.