Obviously not the most luxurious but hard wearing and spacious enough

The good news for taller drivers is the NC offers enough legroom for those up to and over six foot to sit comfortably. On early NC models built from 2005 to late 2008 have a cupholder moulded into the driver's door pocket that can dig into the right leg. It's not a deal breaker but can be an irritation on long drives. 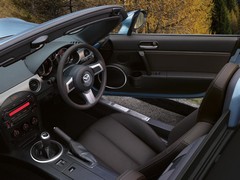 As well as the cupholder, there are door pockets, a glovebox and a centre cubby to store small items. Some owners use the parcel shelf behind the seats, but be careful not to leave anything lying here when dropping the roof as it may catch and break the roof on both soft-top and Roadster Coupe models.

The boot of the NC is 150 litres in capacity, which is not very large, but it will take a couple of soft bags for going on holiday.

The electric window buttons in centre console can fail and are fiddly to replace. With the RC, this is more of a hassle as it is wired into the roof operating electrics. The stereo is easy to upgrade, but it can illuminate a warning light on the dash for power steering. This is cured by starting the car and turning the steering wheel from lock to lock and then restarting the car. 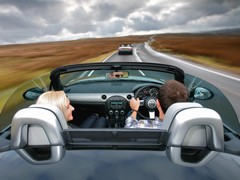 Hope they added the heated seats...

As it gets more use, the driver's side seat belt tensioner can wear and slacken, which means feeding the belt back into the reel to avoid it possibly being caught between the door and body when the door is closed. Cabin plastics can scratch easily, so watch for rings and watch straps.

For both the soft top and Roadster Coupe models, the standard 1.8i and 2.0i models have cloth seats as standard, but heated leather seats could be added as an option. Climate control was another option, also available on the 2.0i Sport. The Sport has heated leather seats as standard in all versions of theNC MX-5. With the large number of special and limited edition models of NC, the colour and interior specification is down to personal taste.

PHer's view:
"It's reasonably comfortable and the revised cup holder positions in the NC2 doors are a welcome improvement to the NC where the drivers knee always rested on the intrusive cup holder."
Foxy Redlaw