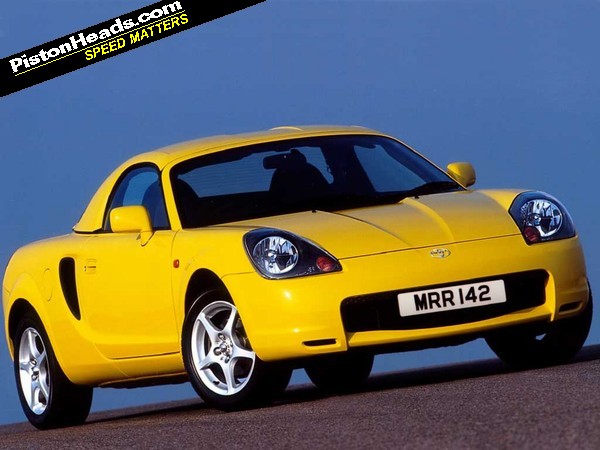 Overall, the third generation Toyota MR2 is 3,885mm long, 1,695mm wide and 1,240mm tall or 1,250mm if you fit the optional hard top. A wheelbase of 2,450mm gives the MR2 relatively short overhangs front and rear, which helps with handling balance. The front track comes in at 1,475mm and the rear is 1,460mm, while all-up weight of the MR2 is a mere 975kg. As you would expect with a mid-engined car, the weight distribution of the MR2 is biased towards the rear with a 45:55 front to rear split.

The bodywork is made from steel and all of the exterior panels bolt on to the main shell, which makes for easy and cost-effective accident repairs. Check all of the panel gaps are tight and even to make sure the car has not been in an accident or poorly repaired.

Early in the MR2's life it gained a small splash guard ahead of each front wheel. These spoilers were there to aid high speed stability. A rear spoiler was an option, as was a hard top, multi-spoke alloy wheels, exhaust tailpipe trim and mud flaps.

The hard top is considered a desirable extra by many buyers and retro-fitting one to a car not originally supplied with a hard top will require a mounting kit from Toyota at about £200. If a car was ordered new with the hard top, it will also have standard air conditioning.

There's nothing wrong with the plastic folding roof, which stows neatly behind the rear seats. It has a glass rear window that gives the car greater protection from thieves and better insulation against wet and cold weather. Make sure the glass is in perfect condition as you have to replace the whole hood if the window is damaged. The hood itself is very tough and should be free from nicks or abrasions, and it should last a very long time.

Check inside the storage bin behind the seats for any signs of damp or water. If there is any moisture in here, the likely culprit will be blocked drain holes from the hood that exit in the side-mounted air vents. It's worth clearing the drain holes every year and it's a simple job reach the drain plugs and flush them through, though some cars with aftermarket air vent covers may make access to the drain plugs trickier.

The front and rear lights can mist up with moisture. It seems to afflict earlier cars more than later models and it's possible to split the light units and reseal them after they've been cleaned and dried out.

Owner's view
"I have a hardtop for mine but I don't think it's worth paying a massive amount extra for. If I was buying again I wouldn't bother, I don't think. It does make the car quite a bit stiffer and changes the drive more than you would imagine, though."
Colin Midgeley