Although the 1.8-litre engine is responsive, it can have a propensity for ovalled bores 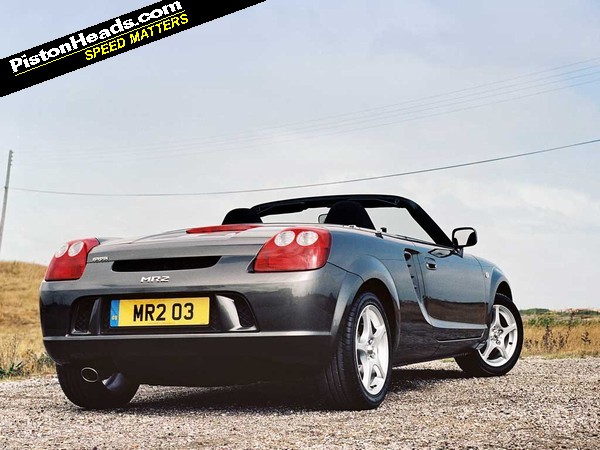 Power from the mid-mounted engine is sent to the back wheels by a five-speed gearbox in early models or a six-speed unit in post-facelift cars from late in 2002-on. Toyota also offered an SMT (sequential manual transmission) as an option with both the five- and six-speed gearboxes. This did away with the clutch pedal, though changes were still made with the gear lever as there were no steering wheel-mounted paddles. When Toyota changed to a six-speed gearbox for the 2003 model year, the SMT models gained ESP traction and stability control as standard.

Both the five- and six-speed manual gearboxes are tough and can take reasonable power upgrades without modification. However, the Bosch electronics for the SMT gearbox can cause headaches and repairing an SMT gearbox is not worth the cost or hassle when a replacement is cheaper and quicker to fit. All UK-spec MR2s have a limited slip differential as standard, while it was a rare option on most Japanese cars, so beware of imports that will most likely not have this differential fitted.

The other big issue surrounding the Mk3 MR2 is engines being destroyed by the pre-cat disintegrating. There has been much speculation as to why this happens on earlier pre-facelift models, but Patrick Mortell of Rogue Motorsport explains: "The pre-cat problem is due to the cylinders ovalling, which allows oil past and into the pre-cat. This causes the pre-cat to disintegrate, with bits getting into the engine and ruining it."

This was a problem when the MR2 was new and current, but most cars that will be susceptible to this problem will either have been sorted or won't suffer from it. If you do have the misfortune of the engine going wrong, secondhand units are fairly cheap and easy to source and Toyota even sells new long blocks at reasonable rates. A sign of an MR2 engine beginning to fail is high oil consumption, so keep a close eye on the dipstick.

It's possible to remove the pre-cats altogether as they are not needed for an MoT emissions check. A lot of owners take this as a chance to fit an aftermarket sports exhaust, which doesn't add much in the way of power but does make the MR2 sound better. Some rattles from the exhaust are not unknown due to loose heat shields, but they are not a cause for concern.

Toyota addressed this problem for the 2003 facelift models by fitting modified oil rings to the cylinders, which prevented oil from leaking past the cylinders and into the pre-cat system.

Another fault can be with the oxygen sensor failing. There are three O2 sensors in the Mk3 MR2 and it's the one that is fitted right after the main catalytic convertor that usually causes the headache. A replacement from Toyota is expensive at around £170, but aftermarket items are available for less.

Otherwise, the MR2's 1.8-litre engine is very reliable and most owners report fuel economy in the high 30s, even when using the full rev range. Further tuning of the 1ZZ engine is possible with an air filter and exhaust freeing helping the engine to 150hp, while turbocharging will take the engine as high as 225hp. However, turbocharging will greatly increase the rate of wear with the 1ZZ engine and you'll need a bespoke ECU if you want to push on to 300hp. Toyota Team Europe offered an official turbo kit for the MR2, but most owners nowadays prefer to replace the engine.

The most common engine replacements for the third generation MR2 are either the supercharged 2ZZ engine from the Lotus Elise, supplied by Toyota, or a V6 conversion using the engine and gearbox from a Camry or Lotus Evora.

A supercharged engine from an Elise is a relatively straightforward swap as only one new gearbox mount needs to be fabricated. Expect to pay around £3,000 for a drive-in, drive-out conversion from the likes of Rogue Motorsport. The 190hp engine from a Toyota Celica will also swap easily into the MR2 and all the parts to do this are readily available from specialists.

A V6 engine swap is more involved and you will need the gearbox from a Mk2 MR2 Turbo to handle the greater power and torque. This is also a much more expensive route to follow, though the performance gains are significant.

Owner's view
"I would recommend to anyone buying one, though, that if the oil filters and oil haven't been changed recently, it's worth getting that done once the car is yours. I had the air filter replaced at the same time and it made a positive difference to the running of the car."
Miles Reucroft