The essential uber-wagon is back. Bow down Britain 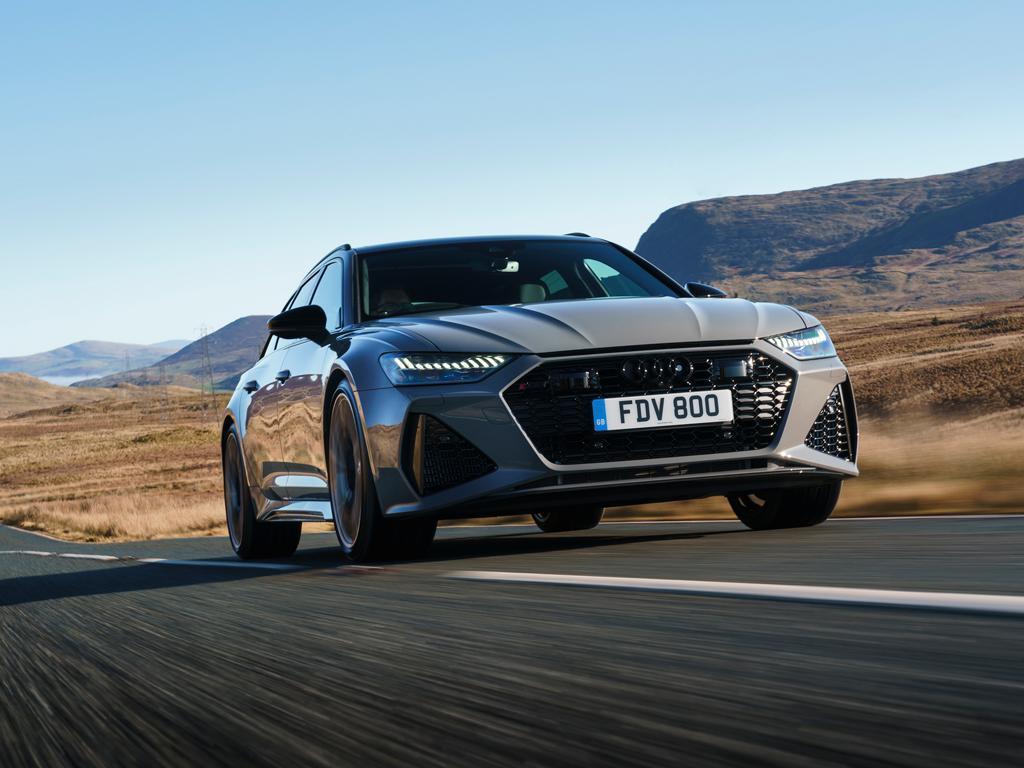 You can look at the new Audi RS6 Avant in one of two ways: very quickly or very slowly. Whenever I catch a glimpse of the RS6, or see it reflected in a shop window, or look up from my phone to see it in repose beneath a street lamp looking menacing enough to bite the heads of puppies, I think it's sensational. But then I look at it slowly - really study it - and I'm not so sure. The vast 22-inch wheels that lurk within those distended wheel arches begin to look comically big, and the apron that folds itself around the two oval exhaust pipes seems overwrought, and the panoramic front grille looks a little try hard. I really didn't like the stying of the new RS6 when the first images emerged, but having spent two solid days in its company I'm now undecided. I suppose that's progress.

The car's appearance is an important point because it was that, among certain other things, that made the previous version universally popular. The third-generation RS6 was handsome in an understated-but-purposeful kind of way. It didn't shout too loudly, but there was real substance about it. Like James May. The new RS6 just seems a bit...Dave Benson Phillips by comparison. Anyway. You'll make your own minds up on the way the car looks, but you should wait until you've seen it in the flesh before you decide one way or the other.

More flamboyant styling aside, Audi Sport hasn't fiddled with the basic RS6 formula too much. The engine is the same 4-litre twin-turbo V8 as before, good for 600hp, albeit now supported by a 48-volt mild hybrid system. You aren't really aware of the electrical assistance day-to-day, although occasionally you'll notice the engine has cut out while coasting and the little electric motor is helping to gently punt the car along. That claws back a little fuel efficiency, if only on paper. The transmission is still an eight-speed auto and, naturally, power finds its way to all four corners. The centre differential can theoretically divert up to 70 per cent of available torque forwards or as much as 85 per cent to the rear. All UK cars be fitted with the torque vectoring rear differential that's optional elsewhere.

Rear-wheel steering is also fitted as standard, as are air springs. Buyers hoping for a more athletic driving manner can pay £1300 for conventional coil springs with adaptive dampers (Audi calls it RS sports suspension plus). The air springs, says Audi, are calibrated more for comfort than handling response. The basic price of the new RS6 is £92,750, although in the UK only a small proportion will be so miserly specified, apparently. Most will be either in £100,650 Carbon Black trim - which adds a carbon fibre exterior styling pack, 22-inch wheels in place of the standard 21s and the RS design interior package (the additional Nappa leather and Alcantara upholstery make a huge difference to the perceived cabin quality), or in £109,250 Vorsprung spec, fully loaded with RS sports suspension plus, Bang and Olufsen, a sports exhaust and plenty more besides.

However you spec your RS6, it'll crack 62mph from a standstill in 3.6 seconds. But you can choose between a top speed of 155mph, or 174mph if you're in a hurry, or 189mph if you're in so much of a rush that you're prepared to pay £1550 for it, and you've also spent £9700 on carbon ceramic brakes. One of the two RS6s I tested this week retailed for £134,000, and I suspect many customer cars will nudge that sort of figure as well. We've already the uber-wagon in the States, but not in the UK and not on continental Europe. This was our first opportunity to try the car on lumpy British roads and at very high speeds on derestricted autobahn. Back to that in a minute.

The new cabin is so swish, so luxurious and so up to date technologically that anybody stepping back into an old RS6 will feel as though they've been plunged into a coal mine. The new RS6's interior is all expansive touchscreens, angular shapes and exquisite detailing. The infotainment system is also brilliant, all of which makes this one of the best interiors the £100,000 performance car market has to offer right now.

A bit like slapping custard, the air springs can tense up momentarily when you cross expansion joints on the motorway at speed. Otherwise, though, the standard suspension setup does return a more settled ride, if only by a little. The coil springs actually feel surprisingly forgiving at motorway speeds, the body of the car seeming to bounce up and down on the coiled steel whenever the road surface falls away suddenly. At lower speeds in town the ride quality does turn a touch brittle, making you wonder what happened to all that lazy compliance. But even on 22s, the ride is never harsh. That's why my preferred RS6 has coil springs: you don't lose as much ride comfort as you gain control and response in corners.

Ah yes, corners. The previous RS6 did those well enough, but never as convincingly as the freakishly capable and agile Mercedes-AMG E63 S. The Audi still doesn't have the measure of the AMG along a twisting road, but this latest RS6 is so much more game than the last. The steering is keener and more accurate, the turn-in sharper, body control more resolute and the chassis balance less defiantly nose-led. And that was on winter tyres. I actually had fun hustling this RS6 along a hillside road. It didn't feel anything like as big or heavy as I knew it to be. And that's precisely why I think this is far and away the best RS6 yet: it does the cruise missile thing on a German autobahn as well as any RS6 before it, and it's comfortable and civilised in normal driving, but it's also very capable when you take it by the scruff.

On the winter rubber that's required by German law at this time of year I wasn't able to verify the expensively raised 189mph speed limiter myself, but I can report this: the Audi gets to 140mph like it's nothing, and then just keeps pulling through 150 and 160 like a train. It's so stable and surefooted at those speeds that the whole process is completely unexciting. I mean that as a compliment.

The V8 engine is a powerhouse. It's responsive, crammed full of torque throughout the rev range (this new model has 74lb ft more than the previous model, which was no weakling itself) and, exhaling through the optional sports exhaust in particular, it sounds thunderously good. All that lets the side down a fraction when it comes to the powertrain is the gearbox, which lacks a degree of snap when you're tweaking the gearshift paddles yourself. Not that it impedes your progress in any way.

All told then, the new Audi RS6 Avant is a triumph. It can be ferociously expensive if you get tick-happy with the options list and it can look a little cartoonish. Otherwise, though...brilliant.