Ferrari's esoteric GT swaps V12 for V8 and goes rear-wheel drive only - is it the one to have? 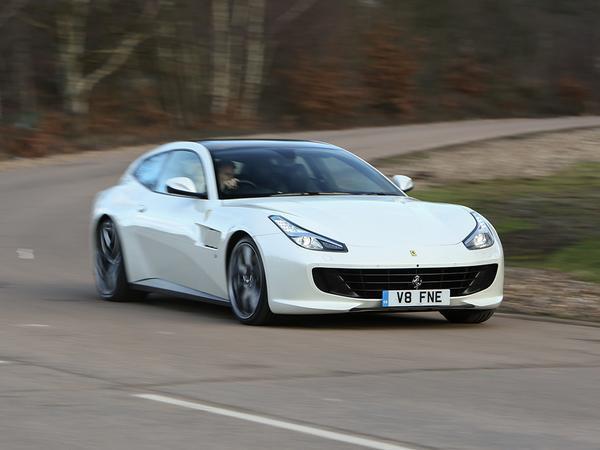 is a wonderful experience: the roads are clear, the weather is fine, and the car is a perfect reminder that, beyond the theme parks and the aftershave, Ferrari still makes the best supercars around.

Sometimes, though, driving a Ferrari is anything but joyous. Sometimes it's a wet and windy Wednesday, sometimes there's an Astra TwinTop holding you up on the A286, and sometimes it's a drive conducted almost entirely in the dark. Then you have to back up at the petrol station because that pump doesn't have super unleaded and the man in the Yaris is very cross. Oh, how the other half live...

That said, these are the sort of scenarios that a GTC4 Lusso should be dealing with, even if this V8 is aimed at a younger demographic than the V12; after all, until the 'FUV' arrives, this is the everyday Ferrari, the practical Ferrari, the take it to the shops Ferrari. Indeed, on the launch of the V12 GTC4 it was proclaimed that FF owners were using their cars more than any other Maranello product in history, so broad was its range of abilities and so well-suited was a 660hp 4WD Ferrari to many people.

So what is this car? It's a GTC4 Lusso T, the 'T' for turbo and the '4' denoting four seats, and not four-wheel drive: this car is rear-driven (with the weight balance shifted slightly back as a result), and uses the 3.9-litre twin-turbo V8 also found in the 488 and Portofino. Just the thing for five degrees in February...

But here's a secret confession: your humble correspondent, in a classic case of preparing to fail, had forgotten that the Lusso T dropped two driven wheels along with the four cylinders. And you know what? In the best way possible, the car still felt four-wheel drive, such was its traction, composure and assurance in foul conditions.

Even allowing for the advantages of Pirelli Sottozero winter rubber (235-section front, 285-section rear), the amount of performance it lets you access when everything suggests it shouldn't is just remarkable. The Lusso is a five-metre long, 1,800kg, £250k car with more than 600hp, yet it engenders huge confidence from the off, feeling for all the world like something less potent.

How does it do this? The four-wheel steering will of course contribute, darting the GTC4 into bends without hesitation. There feels to be a shorter acclimatisation period with the super sharp wheel response too, everything more in tune and fluid than it's ever seemed before. Though that could of course be greater familiarisation with how Ferraris drive nowadays. The damping is fabulous as well, 'Bumpy Road' doing exactly what you would hope and keeping your Ferrari totally planted on even the worst surfaces. There isn't an ounce of slack in anything, yet the car doesn't feel frenzied or flighty; rather it's alive and totally responsive, despite the gargantuan size, which is just how you would want your 200mph Ferrari to be.

Truth be told, that was applicable with the V12 car too, and what made it so incredible. What's most surprising, as has been alluded to, is just how little the switch to rear-wheel drive has undermined the GTC's appeal as an everyday prospect. Despite having more torque than the 6.3-litre version, the Lusso T doesn't squander a jot, even in the worst conditions, right up to the point you go searching for where that limit is, because it must be somewhere... Even then there's little to fear, the traction control's intervention subtle yet eminently more helpful than the driver's. And that sort of sensation doesn't happen in the V12. When the feeling is this accessible, too, with such immediate responses and superbly calibrated systems, it's a joy to have.

It says a lot for just how well sorted a rear-wheel drive GTC4 is that the switch to a V8 could well be the more contentious issue. Can the angry, fizzing blare of a flat-plane turbo V8 really compare with a howling V12? What will it be like with less power? Is the fuel consumption improved?

A mixed bag sounds like damning the Lusso T with faint praise, if only for the simple fact that the bar is set so damn high. Certainly there can be no qualms about performance, the GTC still feeling tremendously, shockingly fast even in the world of the 600hp 5 Series; more than that it's exciting, too, the performance building and building in a manner unfamiliar to most turbocharged engines, rewarding you for eking out as many revs as you dare. As always the engine is paired to a totally flawless dual-clutch transmission, and will happily sit at far fewer revs (with the manettino turned left) when your driving needs to be more docile.

Is the fact a turbocharged V8 doesn't sound as fabulous as an atmospheric V12 really a valid criticism? Probably not, although if you're spending £200,000 on a car you're entitled to expect the very best. 'Fascinating' best describes that V8, an intriguing combination of gurgling turbos and race car scream that's really like nothing else. It's not the classic, V8 rumble that you might expect from a GT, although the GTC really isn't what you might expect of a regular grand tourer... Hand on heart we'd probably still have the V12... just, which is kind of where the Lusso T's problem lies.

It's an utterly fabulous car, be in no doubt: more capable than anything similar you care to think of, more desirable and more exciting. Despite the size it really is something you can feel comfortable in at any speed, and enjoy at any speed too (even if that is 38mph behind that bloody Astra). As an object, as a driver's car and as a Ferrari, the GTC4 Lusso T should be considered a success; it's simply that the V12 fulfils those criteria even more emphatically, sufficiently more so to justify its £30k premium. While Ferrari must be applauded for broadening the GTC's scope for other markets without diluting its appeal, the V12 should be celebrated and embraced for as long as possible. The V8 is a superb understudy, mirroring the talents of the existing model while also adding that rear-wheel drive dimension, but the V12 remains the pick of a fairly sensational pair.