The Design-1 was built with the golden age of sports cars in mind. Can it live up to the source material? 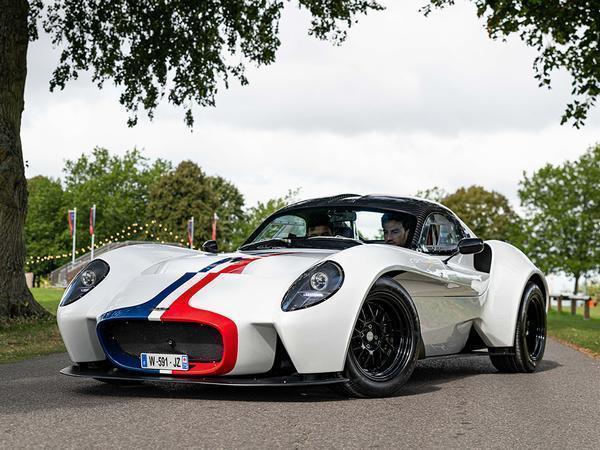 Blenheim Palace's annual Salon Prive event, taking place this weekend, plays host to all manner of luxury, classic and super cars, as well as the sort of highfalutin accoutrements typical of such grandiose surroundings. On Thursday it was the stage for its greatest ever number of UK automotive debuts, with everything from Rolls-Royce's run-out Ghost Zenith to the reborn 1939 Bentley Corniche introduced to the public.

Among them was the Jannarelly Design-1, a car which at first seems at odds with the backdrop. At £85,000 it is relatively affordable, by Blenheim's multi-million pound standards; its 325hp is drawn from a 3.5-litre Nissan V6, not some bespoke hybrid system; and its design is laser-focussed on driving experience, rather than passenger comfort or bystander envy.

Yet it is exclusive, the current production run limited to just 499 cars; it's bespoke, with handmade carbon fibre components; and it is beautiful, a subjective quality, admittedly, but try finding an unappealing angle. Company co-founder and Design Director Anthony Jannarelly, explains the ethos behind his creation: "I wanted to design a pure and timeless sports car. One inspired by the 1960s and 70s, the golden age of sports cars, when engineers and designers all agreed a curvy silhouette was the best solution to go fast - now we know that aero is not the best friend of puristic and sensual design. I wanted a car that offers a thrilling experience without being a headache in normal traffic and without risking your licence at every corner. 320hp for 810kg is a perfect combination to get both modern performance and a classic driving feel."

The result is a classically curvy, pale blue car with a tan interior. The example in question is a customer model, but provides a better indication of the finished product than the pre-production version I'll be driving. "A back to basics vehicle but with a bit of glamour" is how he defines it, a car designed to be less uncompromising than an Ariel or Radical, but to deliver a driver-focussed experience nonetheless - whether on a weekend away with a partner or an occasional track day.

To that end the interior is simple yet refined. There's no radio - though air-conditioning makes the cut - the dash adorned only by a set of three dials and a smattering of switchgear. The linkage of the six-speed manual transmission is exposed, the centrepiece of the cabin, while the carbon fibre seats are padded with thin yet remarkably comfortable leather cushions. All of the interior cladding can be easily removed, swapped out for something sportier for a track day or replaced with a different colour or cloth. That extends to the steering wheel too, and the roof. While the customer car is equipped with a flat rear deck and small aeroscreen, it's simply a matter of popping out a couple of panels to have it re-purposed with a D-Type-style fin, or, for £7,500, a full carbon fibre hard top. "As long as we can get the material, we can make it," says Anthony, "you cannot buy this level of customisation for this price."

When asked to pinpoint where he sees Jannarelly in the market, who its competitors are and where its target market lies, Anthony seems reticent. Donkervoort is the best comparison, he thinks, thanks to the Dutch manufacturer's careful toeing of the line between a Caterham-style driving experience and a prescribed level of interior comfort, but it's not a direct rival. Perhaps a drive will be more revealing.

The car we'll be taking out is a final prototype. While sharing 99 per cent of the production car's features, it wears its many development miles for all to see. The flanks are stone chipped and the interior worn, but that doesn't stop plenty of passersby from stopping to oggle at it as we clamber in. This example is fitted with the aforementioned hard-top, which flips forward dramatically to open, though it retains the standard fibreglass panels atop its tubular steel frame - rather than the 50kg lighter, £12,000 carbon-fibre option.

The cabin is small but with elbow room cleverly sculpted from the doors it's not cramped, meaning you needn't be as familiar with your passenger as you might in a Caterham. The controls are all thoughtfully placed, too, with the wheel, gear stick and pedals at comfortable distances, helping the driver to immediately feel settled within the car. Before we depart Anthony has a word of caution, though, the brake pads are very worn from track testing and, thanks to summer production lapses, weren't replaced in time for my drive - best not push too hard, then.

Which is easier said than done. Carbon-fibre panels or not, the lightweight Jannarelly hits 62mph in around four seconds. A dip of the right toe unleashes a surge of power along with a raucous cacophony from the engine over my shoulder, while a lift results in a couple of ear-shattering staccato bangs from the exhaust. Shifts are spot on, oily yet tactile with a pleasing throw, making getting up and down through the gears a pleasure, although I don't dare climb beyond fourth on these roads - rest assured, the Jannarelly still provides plenty of scope for licence-losing speed.

The steering is unpowered with the rack borrowed from a Lotus Elise and the result being just as communicative as you'd hope. Feedback is superb, with every undulation of the tarmac relayed to the driver, yet even at slow speed, the car's featherweight design means it's never a handful to manoeuvre. That feel, combined with the Design-1's seemingly neutral chassis balance lends its driver confidence in the corners, even in the absence of any form of traction control. But with such a long brake pedal from the get go, caution is the name of the game so it remains to be seen how well the rear mid-engined machine's enormous front splitter helps to keep its tyres pressed into the tarmac at greater pace.

The hardtop's upright windscreen - borrowed from a Mini - and the view through it, contribute heavily to the retro feel that the Jannarelly aims to evoke. It frames the raised fenders, which make the car a cinch to place, while its diminutive overall proportions allow it to be threaded along a B-road with ease. Plenty of cars, from the Mazda MX-5 to the 911 GT3, offer superlative driving experiences, but there's nothing that springs to mind which delivers such a compelling blend of raw, visceral performance with the sharp edges so delicately smoothed. As the hedgerows blur beside you and the engine bellows behind, it's easy to forget that you aren't actually in a product of those bygone decades which inspired Anthony - except for the fact that you aren't uncomfortable or exhausted or terrified.

Where it isn't quite so at home on British tarmac is in the suspension tuning. Body roll is virtually undetectable but the Nitron springs and dampers appear to have been setup with the silky smooth tarmac of Jebel Jais more in mind than the rough and ready B4027 - Jannarelly being a Dubai-based enterprise. A touch more compliance might be called for on UK roads, especially for a car aimed at being less compromising than the alternatives.

But what are those alternatives really? Having driven the car, Anthony's initial hesitation in placing the brand now makes more sense. More visceral than a Jaguar or Porsche but less compromised than a Caterham or Atom, Jannarelly seems to have located a sparsely populated niche in an otherwise saturated market. And with an emphasis on timeless styling, low weight and driver engagement, its appeal ought to be obvious enough to informed buyers. That doesn't disqualify the other options available for the same money, but precious few tick the same boxes - or offer the same exclusivity - as the Jannarelly does. There'll surely be 499 buyers keen to sample its unique traits on a regular basis, and likely hundreds more beyond those lucky few.