Lighter, quicker and cleaner than ever, how does the latest GTI fare in Britain? 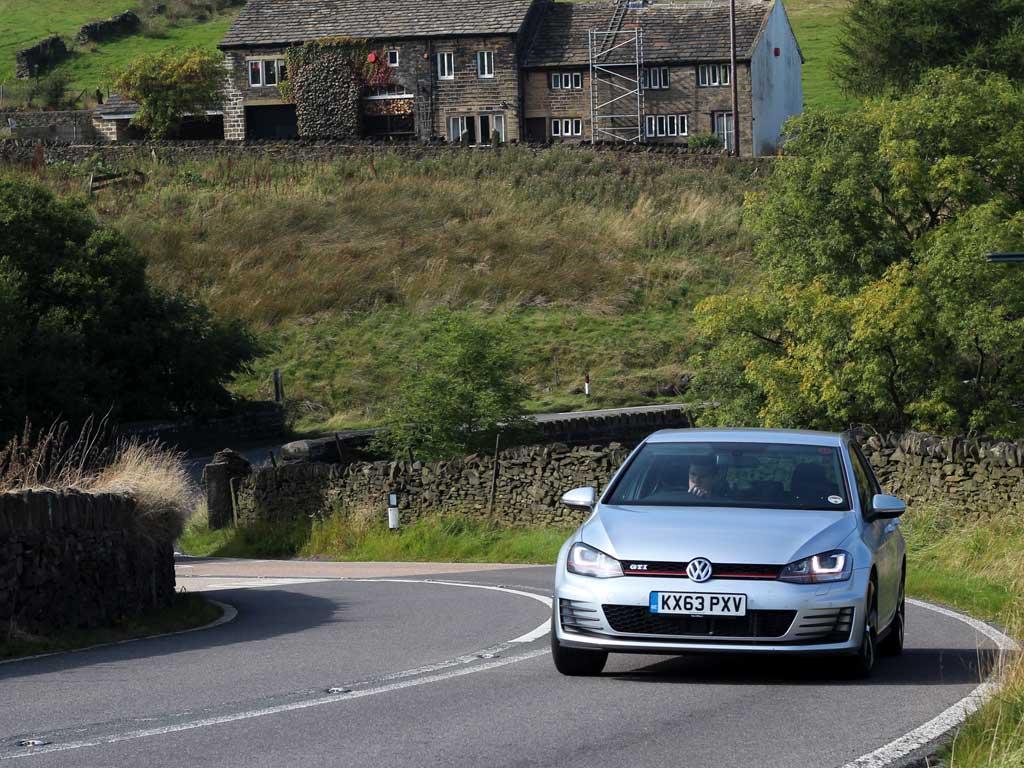 The joy of specs eh? You'll remember Chris Harris returned rather enthusiastic from the Golf GTI launch, having sampled a standard car on the adaptive dampers, previously known as ACC but now mired in confusion as VW has gotten itself in a tangled knot of reassigned abbreviations. Anyway, with RHD press cars now available, we were keen to try an identical one in the UK. Our spec? A GTI Performance model on passive dampers.

As a quick refresh, the GTI Performance pack costs £980 and brings a 10hp power gain (up to 230hp) plus larger brakes (the standard 312x25mm ventilated fronts become 340x30mm, the solid 300x12mm rears replaced by ventilated 310x22mm discs). The inclusion of a Haldex based active locking differential is the most notable extra. Both the GTIs we've driven so far were manuals.

Our two days with the Golf covered probably everything bar track work you're likely to throw at a hot hatch; 250 miles of motorway in one hit, a B-road thrash and the urban grind. And you know what? It was superb. Everywhere.

Initially, the ride seems a bit firm on the standard passive dampers. But it doesn't take long to acclimatise and, more importantly, appreciate actually how well a GTI on standard suspension works with British roads. It just covers all the bases; you can happily spend hours on the motorway in decent comfort but also enjoy a B-road hoon at the end of the journey where the control and damping really shine. Watching it tackle a road is just as revealing; it works with the surface, being supple enough to accommodate bumps but stiff enough to remain composed. As standard, it sits somewhere between the Focus ST and Megane 265 for firmness, which is a lovely compromise.

VW's 'VAQ' locking differential operates in a more subtle fashion than those on cars like said Renault. Where that LSD will claw at the tarmac, grabbing traction from the surface, the process in the Golf is far calmer. Rather than the diff pulling the car out of a bend, it feels like the focus is more on the outside wheel, preventing it from understeering and therefore aiding corner exit. It's certainly effective though, the Golf pulling itself out of second-gear bends quickly and without drama.

Don't expect any tales of trail braking oversteer and the diff hauling you out though. The rear axle simply doesn't contribute as much to cornering as it does in something like the Focus or Megane, plus the driver aids can't be fully disabled either.

But criticising a Golf GTI for its prescribed at-the-limit manners seems churlish as it just does everything up to nine-tenths so very well. Even in the company of the A45 AMG and a certain BMW, the 2.0-litre turbo felt punchy and keen, even if it lacked their outright potency. As Chris mentioned, the six-speed manual has a fairly sweet shift, and the pedals are well-spaced. The brakes are a bit too grabby though and require getting used to more than they should.

So where does that leave us on the ideal Golf GTI spec? One thing's for sure, the standard package is a fine car indeed. The GTI Performance pack certainly appears great value, even if its effects on the road are fairly subtle at anything other than maximum attack.

Now then, the dampers. We loved the standard set-up, Chris the adaptive ones. Our advice would be to try both and make the decision from there. Instinct says that the GTI Performance pack is probably money better spent given it's only £180 more than the £800 adaptive dampers, whatever abbreviation they're covered by this week. In addition to saving £1,415, the manual is also rated as more efficient than the six-speed DSG; there's one decision that should require no deliberation. However the GTI is optioned though, you'll be left with one of the best hot hatches around.