Seconds out, round two! There's a new Civic and a more powerful Focus, so which is best? 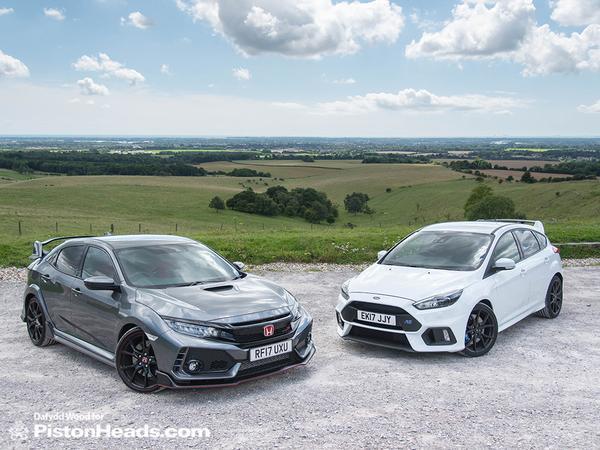 Here we are again, already. It doesn't seem that long ago that the sun was shining in Wales for the

, largely because it wasn't. But just 15 months after that comparison, there's an entirely new

Crucially however, before the Ford fanboys cry foul, this time around it's a road-only comparison - given how the last test went, that should favour the Ford. Furthermore, previous experience of Mountuned Fords, both Fiesta and and Focus, has suggested that even the milder 'Mountune Performance' upgrades (i.e. the ones that keep the warranty) deliver more than the spec sheet might suggest. This is far from a foregone conclusion, put it that way, and is the PH twin-test to establish hot hatch supremacy: without a new Megane yet, the Civic is the best front-wheel drive offering out there, and the Focus is more fun than the slightly staid Golf R. Place your bets... 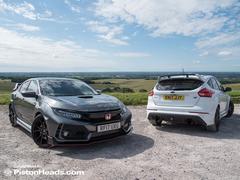 Well why are you still stationary?

Having experienced the new Type R since we bade farewell to the PH long-term Focus, the RS seems like a good place to start. It remains, even after thousands of miles of driving, a bemusing car. Sometimes it feels like one of the most exciting hot hatches ever, delivering the very best that both front- and four-wheel drive can offer in one fantastic package. On other occasions it can feel a bit flat, not tremendously fast and a little too much like a Focus, to be honest. Maybe today is the day to be a bit more conclusive.

Things begin well for this particular RS as it has the regular Recaro seats, rather than the cost-extra shell items; they're still very supportive but place the driver lower than the optional chairs. You might argue one of those stools boy bands used to sit on would place you lower as well, though the benefit should be noted. It means your relationship with the pedals, wheel and gearknob is better, even if it could arguably be improved further still.

Of course that's not the main point of focus - apologies, it had to happen once - today. Rather it's the 'FPM375' part of this RS, a tweak that gives the car nearly as much torque as a V8 Mustang (376lb ft against 390) and a claim to hit 62mph as fast as a Cayenne Turbo. 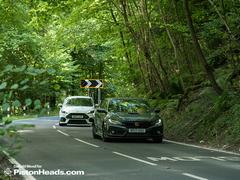 Badges aside there's nothing to mark the car out externally, though the changes are immediately apparent on the move. Put simply, much like other Mountune Performance kits, this 375 pack has made the RS more eager, more urgent and more fun, for not a great deal more money. Torque was always a fastest Focus strong point - it has another 300cc of swept capacity over its rivals - and now the RS feels wickedly strong in its mid-range, pulling through fourth, fifth and even sixth with real conviction. Remember the Civic has more than 80lb ft less...

There's more, too. New turbo noises make their way inside, the Focus now whooshing its way up to speed and giving the whole process some welcome additional drama. The intake sound is more aggressive and it won't be long until you're driving the Mountune like your first fast Ford - or your mother's 1.25 Fiesta, in my case - razzing around like a man possessed. And entertained. Which is kind of what they're about, right? A renewed vigour from 6,000rpm and above seals the deal - the Mountune pack is best thing you can add to a Focus RS, and costs less than those infernal seats.

Sort of perfect
The problem? Well as far as Mountune's work is concerned there's nothing bad to report, though of course it hasn't touched anything else. So while there remains plenty to recommend the Focus RS, there are also elements that will drive you up the wall. 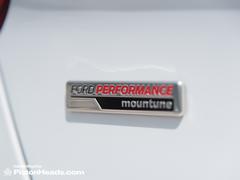 Don't misunderstand: this remains a great hot hatch to drive, unique in the segment with that GKN four-wheel drive. The constantly overspeeding rear axle means the RS feels a bit like it's fighting itself as well as the road, wrenching out traction from wherever it can be found. It's still one hell of a party trick though, the super sharp steering guiding you in and then the throttle helping you complete the rotation. As a car to wazz along a B-road with a big, juvenile grin plastered across your face, the Focus's capability and fun factor mean there's little better.

Trouble is, it's compromised. The ride cuts you as much slack as a loan shark, never letting you relax and keeping you on edge even in the normal mode - with the Civic's breadth of ability increased, this restless nature is more starkly apparent. And all that clever technology that makes it feel agile can only partially disguise the car's weight: a hackneyed point maybe, though 1,599kg with a driver is a few bags of sugar more than a manual M3 by the same measure... While that is hidden pretty well on the road, it never leaves the back of your mind.

Especially when you swap straight into the Civic, officially 148kg lighter and feeling like every single one of them on the same stretch of road. It's alert and agile in a manner the Focus can't compete with, the sensation of gnat-like reactions no doubt heightened by a new seat that drops you right where you would want to sit. Not 30cm above it. 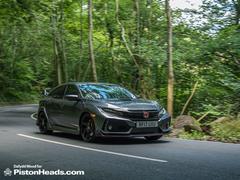 It's a tenacious, ferocious car on a country road, the Civic Type R. Not wild or unruly, simply capable of speed and precision you wouldn't credit something front-wheel drive with having. We thought that was the case with the previous

, but this has taken it onto another plane.

Once rolling, there's no way this Civic is any slower than the Focus; it could even be a tad quicker thanks to some shorter gear ratios. Just as importantly there's an effervescence to this 2.0-litre VTEC turbo that wasn't quite there before, the new flywheel reinstalling some trademark zing to a four-cylinder Honda. Combined with that fabulous manual, the driver will be busy but contented - the Focus probably sounds better, but the Civic's powertrain is the nicer one to use.

Heck is it good to drive as well, though in a different fashion to the Focus. On the road it's the Ford that feels more playful, less serious, a tad sillier if you will. Its whole demeanour is encouraging you to have fun, willing to be agitated both on and off the throttle and making a right old racket in the process. The Type R feels like it would be happier on a circuit yet remains immensely enjoyable on the road: even in Sport mode it is noticeably more supple than both the Focus and the previous car, which means you're encouraged to push without feeling like you'll be flung from the tarmac. This frees you to marvel more freely at the outstanding brakes, the lithe agility and the awesome traction. How 320hp can get through a pair of 245-section Continentals so effectively is witchcraft - this Type R is a devastatingly effective and hugely engaging hot hatch on the road. 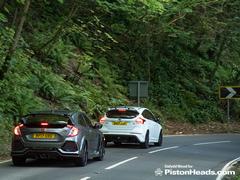 Might trail here, but the Civic wins this test

Combine this with refinement that surpasses the Ford, more space than the Ford, better economy and a lower purchase price, and you can see where this is going. The Mountune FPM375 is the best Mk3 Focus RS yet, no question; however this Civic Type R is not only the best hot hatch currently on sale, it really deserves to be recognised as one of the Japanese performance car greats. If anything, the gap between the cars now is greater than it was last year; given how good the Focus is compared with so much else in the class, that should tell you what an achievement the Type R is.

As before though, the Civic won't have the chance to saunter around hot hatch hill gloating about its victory for long: softer remit or not, the Hyundai i30 N has proven deeply impressive, there's that new Megane on the horizon too and a Focus with a front limited-slip diff as well. It's not over, basically; let's reconvene somewhere else in a few months...