You know the best thing about sibling rivalry? It's fun to watch...

Why is it that when I first drove the original Porsche Cayman GT4 in the far north of Scotland in 2015 I was blown away by it, but when I tested its replacement a little further south at Knockhill four years later, I was merely very impressed? It has to be one of two things: either the newer 718 Cayman GT4 isn’t actually as good as its predecessor, or my own expectations were playing tricks on me.

Wouldn’t be the only time. The same thing happened when I drove the second McLaren LT in the series, the 600LT – I was hugely impressed by it. But the first in the line, the 675LT that predated it by three years, remains one of my favourite supercars of all time. I adore it. Is the later LT really any less good than the earlier one? I suspect if you were to quiz McLaren’s own engineers on the matter, they’ll say the opposite is true.

It’s like most things, isn’t it? First time is always the best. You try something once, have your boundaries and understanding redefined, then giddily dive back in expecting to feel the same thing all over again. Which you don’t, of course. I wanted to know if the most recent GT4 left a more translucent impression on me because of that alone, or if it really is any less brilliant to drive. That’s why over a soggy couple of days in and around Cheddar Gorge, we forensically compared one with the other. 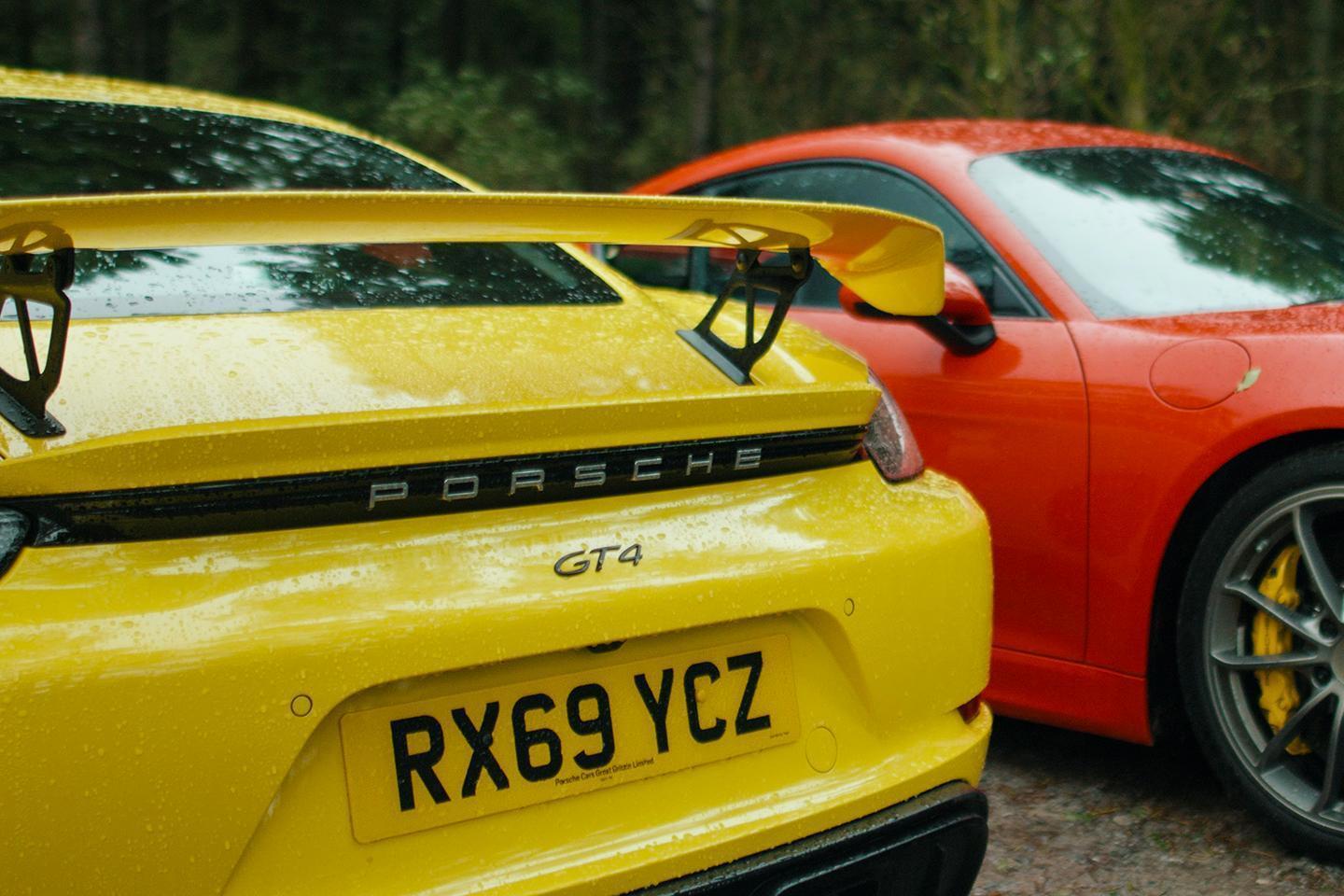 I won’t give away the conclusion here, but I can dig into some of the similarities and some of the differences. The way the two cars sound, for instance. From inside the cabin and after several hours at the wheel of each, I doubt I could tell one from the other on sonics alone. As far as I’m concerned they make basically the same slightly serrated, distinctly flat-six howl, neither soundtrack being anything like as visceral as you get from Porsche’s rear-engined GT cars.

However, I’m told that from the outside they actually sound quite different, the newer car with its particulate filter seeming more strangled and a good bit quieter. (Perhaps you’d be aware of that windows down, but given the foul conditions we had on both days I only drove with them up.)

Despite the greasy road conditions I could feel the 718 Cayman GT4’s extra 35hp, but only right at the top end. Where the original car’s 3.8-litre engine begins to strain and fade fractionally at around 6000rpm, the newer, more powerful 4.0-litre starts pushing harder. You just sense a little more longitudinal g-force in that instant before you shift up a gear.

They had the same delicious cornering balance, much the same grip on their Michelin Cup 2 tyres in those sodden conditions (both cars were very drivable in the wet, but they would also slip and slide around just enough to keep me on edge) and the same canny way of smothering poor road surfaces while also keeping their own masses firmly in check. But I was surprised by how much newer the 718 Cayman GT4 felt inside, thanks mostly to its far more modern infotainment system. In fact, the original GT4’s touchscreen looks much older than five years nowadays with its blocky maps and graphics.

The biggest differences between the two, though, you could discern at car park speeds. Whereas the older car’s clutch pedal meets the ball of your left foot with real resistance, requiring that you consciously extend your quadricep to press it down into the carpet, the new car’s left-most pedal seems to fall to the floor under the weight of your foot alone. In traffic that would be the difference between one car being tiresome and the other just fine. Similar thing with their steering. At all speeds but particularly when manoeuvring, you use your shoulders in the 2015 car rather than just your wrists. The 2019 model, meanwhile, is much less demanding. Again, that’d make a huge difference in normal everyday use.

There is a trade-off in all this, but I won’t spoil it now. Although I will say this: I really did have quite different experiences in these cars when first I drove them, and now I know there wasn’t a single reason for it. Partly it was to do with my own heightened expectations, but there was something inherent in the two cars that explains the discrepancy as well – it wasn’t just me…

What about the way the two cars look? I’ve always adored the early Cayman GT4’s styling, the way that road-scraping front splitter is balanced at the rear by the tall but not preposterous wing, and the gorgeous dish of the rear wheels. Viewed head on the two are close to indistinguishable, but from the rear they’re quite different. And though I’ve always liked the original’s styling, from that view the newer car really does make it look a bit limp.

The 718 Cayman GT4 has a strip that runs across the width of its rump, plus slimmer rear lights like a predator’s narrowed eyes and exhaust tips set far apart to make space for the diffuser. All of that gives the later car much more visual width and muscle, something I would never have noticed had I not seen them parked side-by-side.

Anyway, I hope you enjoy the video. We’re well into that time of year when filmmaker Harry Rudd deserves even more credit than usual, because while I sit in the warmth and comfort of whatever car it is we’re shooting, he’s the one who gets soaked through and freezing cold standing by the side of the road or in a muddy carpark. Thanks, Hazza.