A battle with a baby brother and a tussle with the twin in a busy first month!

Wouldn't you know, life with the Abarth is proving rather enjoyable. It's not with me at the moment and I think I'm missing it slightly. Curious. For a car that didn't impress all that much on first exposure that's very pleasing, and what long-term tests aim to achieve. 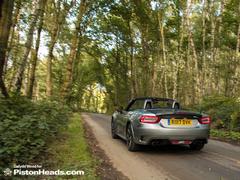 There are still reservations, and I'm not a total convert yet, but there are little (and quite endearing) details that are being revealed day-to-day. That seemingly small boot can take a huge suitcase when your girlfriend massively overpacks for a holiday. The roof is now going up and down without a second thought, its simplicity a joy in our fickle climate. As the temperature drops the exhaust is rowdier too, and I'm learning how to get the pops and bangs on demand. And roof down with the heating up, the 124 is rather pleasant - agile, potent, entertaining.

Of course though, the irks begin to make themselves a more permanent fixture in a long-term arrangement. Fortunately, however, the list of those is shorter. Why the Abarth has Alcantara on the dash (where it's of no use) but not on the wheel (where it would be welcome) is a mystery, and having got used to keyless entry with the Swift it seems odd to use a car without it now. Like I said, minor gripes. 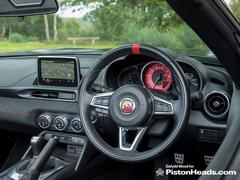 The 124's case was helped in its first month by a couple of comparison tests, too. The first was with a 595 Turismo, one in which the newer Abarth really shone. Or the older one performed pretty poorly; depends on your perspective. Not only does the 595 feel like a much cheaper car with performance forced upon it, it also feels pretty old now and, to be frank, quite compromised. The driving position is awkward, the gearshift baggy and the ride jiggly. It still looks quite funky - even after all this time - and there's some entertainment to holding on in something that really shouldn't go that fast, but the 595 isn't a brilliant car to drive. The 124, despite its issues, felt like a junior Ferrari by comparison - low slung, well honed and engaging. Perhaps the two aren't directly comparable, though the 124 must be considered at £27K (for the Scorpione version) when you can pay up to £25,000 for a '695 Rivale' cabrio. 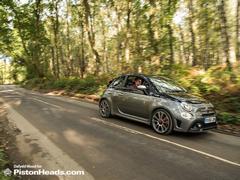 A far sterner test came in the shape of the Mazda MX-5 blood brother, in 2.0-litre Sport Nav trim that's most comparable to the Abarth. They're separated by just 10hp, 15kg and, using that Scorpione spec again, less than £3,000. The duel is coming in a proper twin test soon, but it won't give way too much to say that it was a very enjoyable day, and that the two cars are admirably discrete despite their shared underpinnings. More on that to follow...

The Abarth has been busy then, showing nearly two thousand miles more than when it first arrived with us. It will continue to accrue the miles as well, and we're hoping to get it out at the Silverstone Sunday Service at the end of the month too. Given it's about the only place we've not driven the car yet, I'm really intrigued to see how it performs.