PHer makes a convincing case for the self-built sports car - read it and be inspired!

Tony Hart (no, not that one) 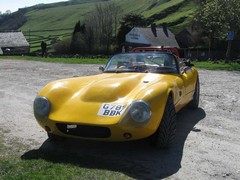 "Tinkering and GRP held no terror"

Why I bought built it:

"Way back in the mists of time I built a modified Ford 100e Anglia and had always wanted to build another car, but this time something without the ever present curse of rust. I'd run a Rickman Ranger kit car as my daily driver for about six years at this point, so tinkering and GRP held no terrors for me. At first I considered a Seven as the thought of seeing the wheels reacting appealed, then someone I knew bought one and found that behind the flat screen was a vacuum that stopped them breathing at anything over 50mph. So I wanted a curved screen then.

"The Fury shape is frankly gorgeous. It's rare to find a kit car which is both beautifully styled and beautifully engineered, but Mr Jeremy Phillips has achieved it with several of his cars. It passed the SVA first time with no comment - other than 'you're no fun - there's nothing for me to write on the fail sheet!' After getting the crossflow with twin Dell'Orto 40s) rolling roaded and the suspension set up and corner weighted the car was a revelation. 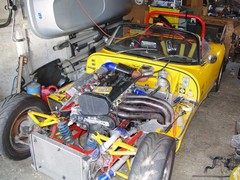 "Then I got made redundant, but walked straight into a new job with a fat redundancy cheque. So the brakes, engine and gearbox got uprated, brakes to Wilwood, gearbox to a longer first gear strengthened unit and the engine to a brand new 2.0-litre Zetec so adding 100hp per tonne."

What I wish I'd known:
"How addictive it would be. The driving is as pure as you'll find, with no power assisted ANYTHING, everything the car does is purely down to me. I also wish I known that powder coating the chassis is a bad idea. In some places it sticks like you know what to a blanket, in others it peels off in sheets. I wish I'd had it delivered bare and done the treatment myself."

Things I love:
"All of it. You may think that a car with no stereo and no roof, with non-adjustable GRP seats bolted to the floor and a 'seat cover' three quarters of an inch thick would be for short range B-roads only, but I've done Guildford to Lands End and back in a day, I've done road trips of 1,500 miles in five days and the car just soaks it up. I get out less tired than if I'd driven the family bus Zafira a similar distance. It makes no sense I know, but that's how it is. 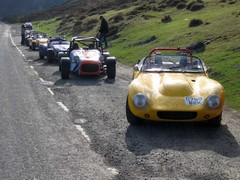 Out and about with like-minded friends

"I also love the 'theatre' of driving it. Pushing it out of the garage buckling up the aircraft style five-point harness, flicking on the fuel pump and prodding the starter. I love the way a set of R888s will last 12,000 miles and the brake pads never show any signs of wear - a 600kg car doesn't impose much wear and tear on anything. The closest it's come to breaking down was when a badly fitted clutch cable came adrift (my own fault) so I started it in first and drove home clutchless. It has no LSD because it doesn't need one, on a dry road it just 'grabs and goes' and on a wet road I'd much rather a wheel span and I lost traction than both wheels spin and I lose control."

Things I hate:
"Hate? Nothing really, though it'd be nice if the soft top was easier to put on (I'm working on a mod for that) but it's only ever used if the car's parked outside overnight. It'd be good if the headlights were a bit better, but I wanted the Lucas 'tripod' lights for the look of the thing so I don't drive flat out in the dark. It could be easier to get into, but only by lousing up the styling and the dynamics. Again, it's part of the 'theatre' of driving a 50s style car with 21st century performance." 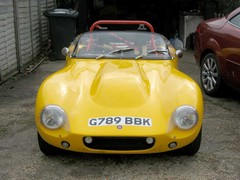 "The Fury's regularly out with the Southern Kit Car Club all over the south east, it's been out in temperatures from -2C to 40C and has also been through most of the English and Welsh counties, it's been to the Rallye des Jonquilles in France twice, Belgium, it's been on two SKCC road trips each of 1,500 miles and later this year I'll be going round Britain seeing all four coasts in six days and doing the Rallye again, this time with my wife - there may be trouble ahead! I've also used it for commuting and getting the family shopping." 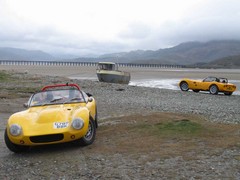 [Tony didn't actually include anything for this but see 'Where I've Been' and you'll get an idea of his plans! - Ed.]