Can the F-Type formula really work with just the four cylinders?

Why would you buy a

? That's not intended as a sarcastic question - there's plenty to recommend it - but a genuine enquiry. The looks must surely play a part, right? The image of a traditional, unapologetic British sports car will contribute as well. And - cliché alert - the sense of theatre with an F-Type has to be important - the fancy interior, the details and, most importantly, the noise. It's a feel-good kind of sports car. Whoops, one more for the cliché count...

Whether V6 or V8, you're going to get an earful of engine sound in any F-Type. The V6 howls, the V8 thunders, and the rather anti-social volume of both is very endearing. 'Naughty' seems the right word, so can that work with four cylinders?

Jaguar is certainly keen to maintain the F-Type visual occasion and excitement with the 2.0; it can only be identified from a V6 by its own design of 18-inch wheel and the single exhaust pipe, as opposed to two. For the vast majority of people, this will remain simply a very attractive F-Type. They won't be thinking it's a poor relation, put it that way. 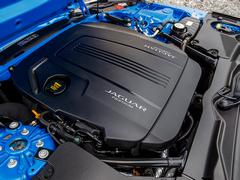 Well, right up until you start it, of course. It seems harsh to criticise the F-Type for sounding a bit gruff on start up - because what doesn't? - though there's no hiding from its lesser cylinder count. There's a flare of revs, as with the other models, but nothing to get you excited before moving as the V6 and V8 might.

While we're on criticisms - there are plenty of positives to come, fear not - it seems rather a shame that the sports car of the Jaguar line up shares the same stats as the rest of the range. 300hp and 295lb ft are competitive, but that's also what you get in an XE with this engine, or a Velar, or an F-Pace. The same power and torque, produced at the same rpm, in every single car. Perhaps we're being overly picky, but shouldn't the sports car boast a little more?

To those positives. The 52kg weight saving from the front end has transformed the F-Type's dynamics, frankly. Where in the V6 and V8 cars the quick steering - to contrive a sense of agility - can occasionally catch the car out, here the relationship between front and rear feels more harmonious. The turn-in is still sharp, but now the car can keep up. It's agile, accurate and eager to a level unfamiliar from the Jaguar sports car, which is a pleasant surprise.

The same hardware is used for the four-cylinder car from the other models, with a unique tune to account for the weight loss. So the front spring rate is four per cent softer, the rear three per cent, and the dampers recalibrated. There's still an underlying firmness to the ride, but again it feels to be a level of precision that befits the car, rather than an attempt to instil a character that isn't actually there. And there's just a tad more of that Jaguar grace with the softened rates, even on the optional 19s. 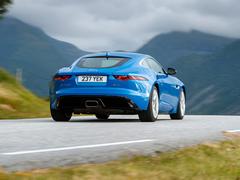 The four-cylinder car has the best electric steering of any F-Type yet as well, with more coming back through the wheel and a greater sense of connection with the front Pirellis. However, some reported excessive tramlining, with the new-found fondness for diving into a corner also extending to cambers and truck grooves. Hmm. Too much negative camber perhaps? It's one to report back on in the UK, though in our test car the signs were mostly very positive.

And that engine? Fine, really, and nothing more. No doubt we'll be sent to the gallows for suggesting as much, but both the 2.0 and 2.5 Porsche 718 engines are better. They pick up from fewer revs, respond to throttle inputs more keenly and rev out more enthusiastically. In a lighter car, a 300hp 2.0-litre Boxster feels faster than a 300hp 2.0-litre F-Type. Sorry, it just does.

The Jag sounds better, though. All test cars had the active exhaust, so we can't comment on the standard set-up, but the optional system was growly and purposeful and - crucially - not like a Beetle. It does the overrun crackles, parps its way through gearchanges and, being realistic, sounds about as good as you could expect from this configuration. The intake noise is said to be "meticulously tuned", though it's unclear whether this is through the speakers or not. Crucially however, where the noise is a key part of the appeal in other F-Types, it would be a challenge to say that here. 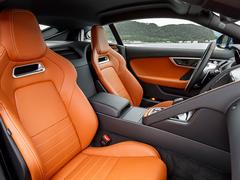 because, well, this is PH. If we're not calling for a manual then who will be? While the Jag attitude on such matters is 'never say never' the simple fact is that, where available, take up on the six-speed manual has been less than five per cent. Note that's less than five per cent. The case isn't there for it at present. Pleasingly the automatic is more than good enough, the ratios tightly packed for involvement on a B-road and gears swapped speedily. Just nobody say PDK at this moment. Or M DCT...

For now, there's not a great deal more to say on the four-cylinder F-Type. Its launch was shared with the Range Rover Velar, where the Jaguar felt like the older sibling that just so happened to share a birthday. It's new baby versus the four-year-old toddler that nobody especially cares about. Hence less time behind the wheel and a fairly ordinary route. The limited cornering opportunities did reveal those favourable traits discussed, though there was also a sneaking suspicion of it being a bit overtyred (245-section fronts, 275-section rears on the 19s) and, when the grip did run out, a little scrappy without a limited-slip diff.

Four Thought
These concerns could be confounded with a more detailed test - and hopefully they are - because there's a lot to like about this entry level F-Type. Focus has switched from the engine to the chassis for perhaps the first time, and the latter has actually proved itself very good. This F-Type feels like more of a sports car than any F-Type before it, essentially, and that includes the SVR. 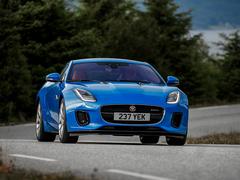 Very good, very likeable, but so are the rivals...

Trouble being, as more of a sports car it has to compete against sports cars, does it not? And, being brutally honest, an F-Type 2.0 is slower and not as good to drive as a Cayman 2.0, while also being £7,000 more expensive. Of course, neither will leave the showroom standard, but the Porsche is from £42,897 as a manual and the Jaguar £49,900 as an automatic. For six cylinders at less than £50K you're looking at a

, and you don't need us to remind you what a compelling case that makes for itself.

In addition the manual, V6 coupe - a 340hp car, rather than a 380hp 'S' - is from £52,265, or just £2,365 more than the four-cylinder car. While the four-cylinder car is actually sharper to drive, the V6 arguably suits the F-Type's character rather better. If you see what we're getting at. With six or eight cylinders, and especially with a manual gearbox, the F-Type remains an engaging take on the sports GT car in its own little niche; with four cylinders it may struggle against the more direct opposition it now faces.