Furore over the Boxster going turbo has just about calmed; time to re-ignite it with the 718 Cayman!

With the 718 Boxster having taken the grenade for Porsche swapping cylinders for turbos, will the 718 Cayman be in for a slightly easier ride? From hot hatches to supercar icons, it's safe to say we know the script when another normally aspirated heroes trades 'soul' for forced induction. 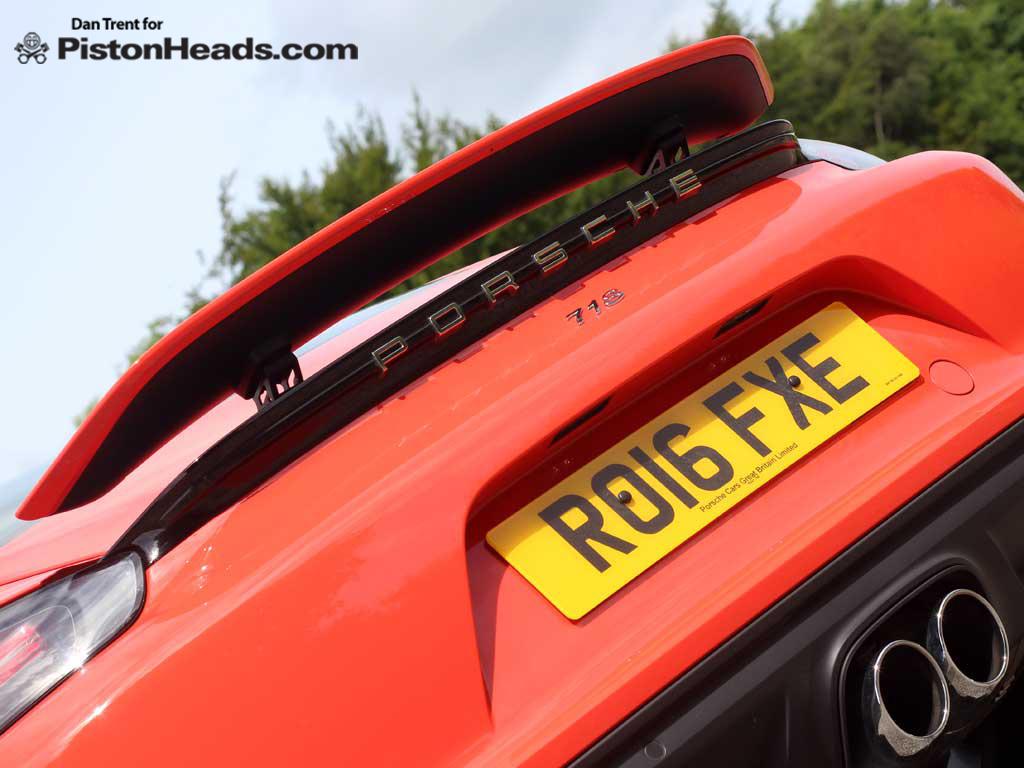 and then wrung our hands over what some of the new tech does to the driving experience. Details of what this means for

have already been revealed, including confirmation its position in the range has been swapped with the Boxster and it now costs nearly two grand less than the equivalent open top 718, like for like.

So a base 718 Cayman now has a 300hp 2.0-litre with 280lb ft of torque (the same as the previous GTS) and starts at £39,878 - fundamentally it's a Carrera engine with a couple of cylinders removed and a single turbo. The S we have here is bored out to a 2.5-litre, gets a fancier variable vane turbo and has 350hp and 310lb ft at a starting price of £48,834. After a vigorous work-out on the configurator the car you see here is closer to £70K, a number many will consider challenging when divided by four cylinders. 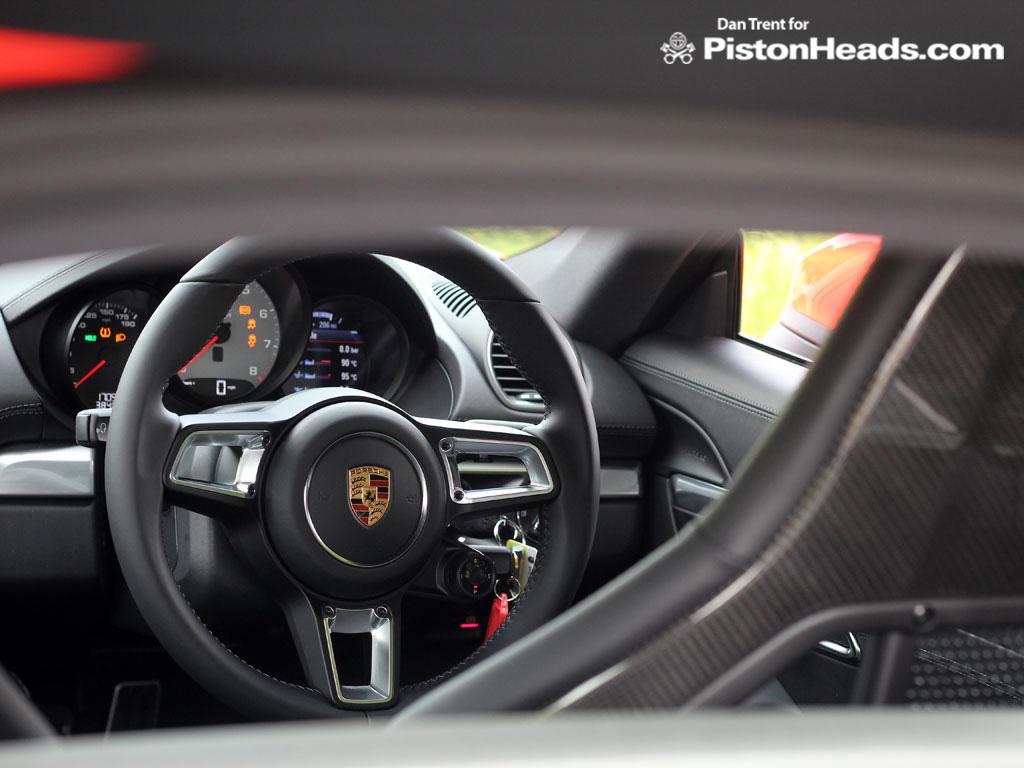 We wouldn't want to spoil your fun discussing the rights and wrongs of the many and various numbers surrounding this car. So let's instead attempt an objective appraisal of what you get for your money. And if Porsche has conjured up a driving experience good enough to match it.

To do that we need a good bit of road. North Yorkshire's B1257 is exactly that. Its twists, turns, crests and gradients could, in many ways, be likened to a point-to-point Nordschleife and its according popularity with both bikers and the local constabulary's camera vans is well-known. In a car its lack of width, short sightlines and roller coaster gradient changes test chassis, engine flexibility and forward planning - along a road like this bigger and more powerful cars feel over-endowed in performance and limited in road space. You need something small, agile and with instant punch to exploit opportunities as they come. Something pretty much like a Cayman, in other words. 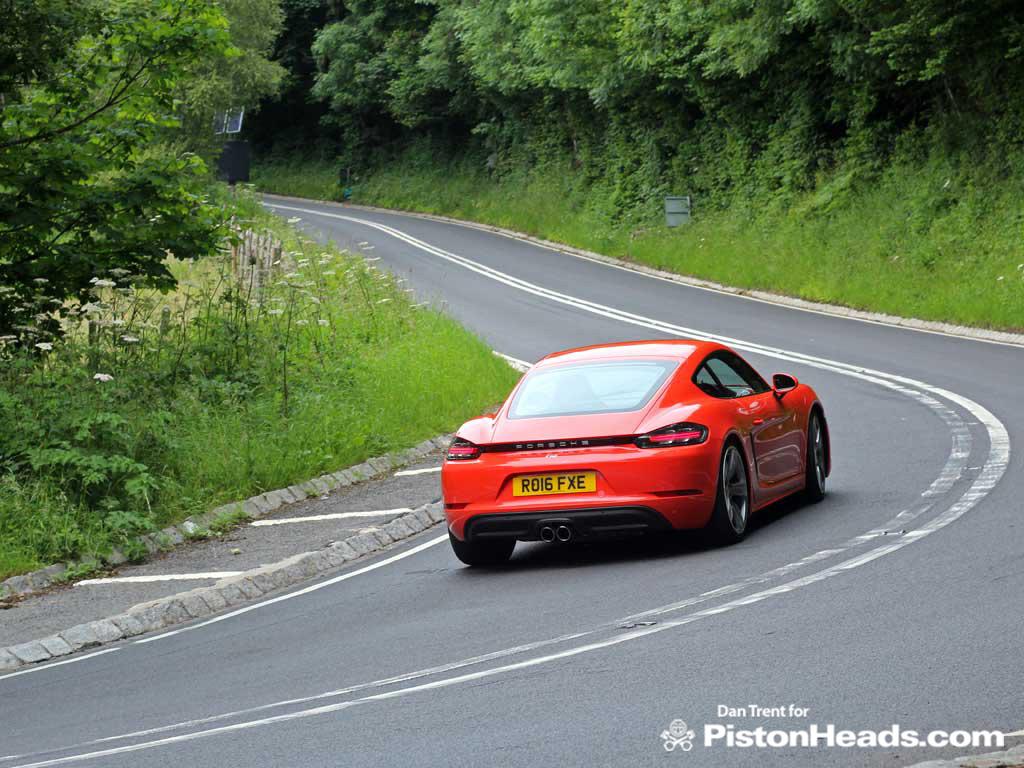 As we know from the 718 Boxster S, the four-cylinder motor doesn't do itself any favours with first impressions. The idle is coarse, there's a low-rev vibration through the bulkhead the six never suffered from and the Beetle-like vibe really doesn't feel like it belongs in a car whose price is a PDK gearbox away from starting with a seven. On the flat dual carriageway that leads to the moors the engine noise fades to a drone, drowned by tyre roar from inch and a half wider tyres wrapped around 20-inch Carrera Sport rims. Chunky in look and £1,566 price, they're among a selection of new wheels introduced for the 718.

The six-speed manual shifter in the centre console is a welcome sight and, given the obvious extra flexibility, means you can leave it in sixth and lean on the torque where the seven-speed PDK would needlessly hunt around the ratios. As such it's a relaxed cruiser, the cabin familiar but fresher with the smarter PCM interface a big step up, even if you pay an additional £1,052 for the nav module. 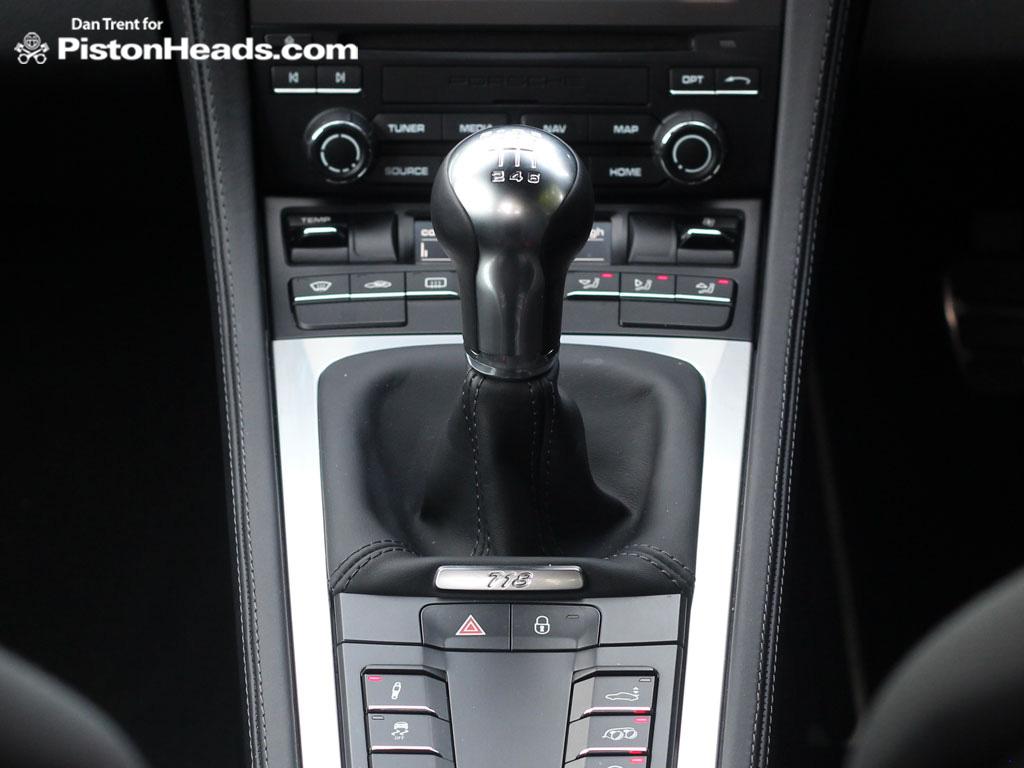 With its Lava Orange paint, fixed-back carbon seats, sports exhaust, ceramic brakes, Porsche Torque Vectoring, smaller GT steering wheel and the aforementioned manual gearbox, our man from Porsche says this particular car is intended to showcase the more focused end of the possible 718 spectrum. It's also got the most extreme of the three suspension options, these going from passively damped to 10mm lower PASM switchable and, in this case, 20mm lower PASM Sport.

As the roads filter down to single carriageway and the ascent into the moors begins there's incentive to twiddle the Manettino-style mode dial on the steering wheel, this being Porsche's sole concession to the fashion for button festooned wheels these days. In the usual Porsche style you can also mix-and-match the settings via the buttons around the shifter, the Individual mode permitting you a hot key for your favoured combination. 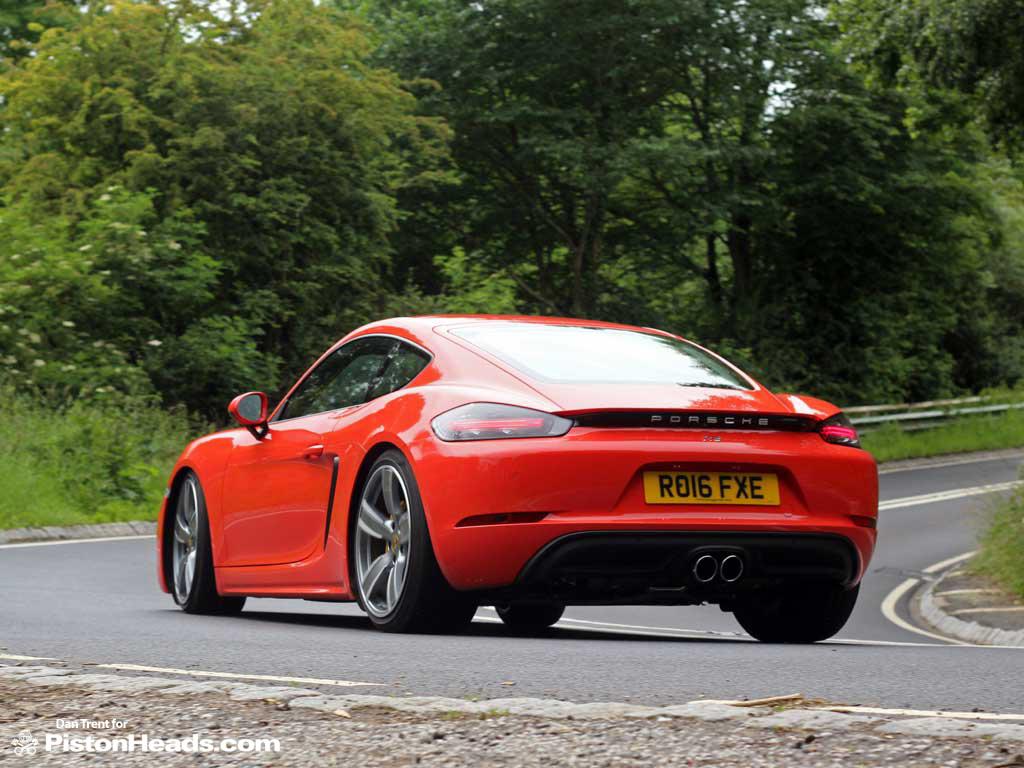 ) seems the ideal, this giving maximum noise and the more assertive throttle response but keeping a little comfort in the chassis to take the edge off the bumps. Body control is such motivation to stiffen the dampers rarely goes beyond idle curiosity.

Feel the flow
The rest of the package is predictably encouraging for that all-important flow. The Cayman's size and natural agility are all perfectly suited to roads where a 911 now feels too broad to truly hustle. There's confidence inspiring weight to the electrically assisted steering wheel and a predictable and faithful response to corners fast and slow. For all the promises of 10 per cent faster reaction and 911 Turbo suspension parts to improve front-end bite it feels a little 'safe' on turn-in though, the front axle lagging just a tad behind your line of sight as you look through the corners and plot the path of least resistance. There's also little sense of the PTV-enhanced limited-slip diff doing much to help rotate the car into the corners; such is the inherent balance of the Cayman's mid-engined layout and grip on tap it doesn't have much work to do on a dry road. 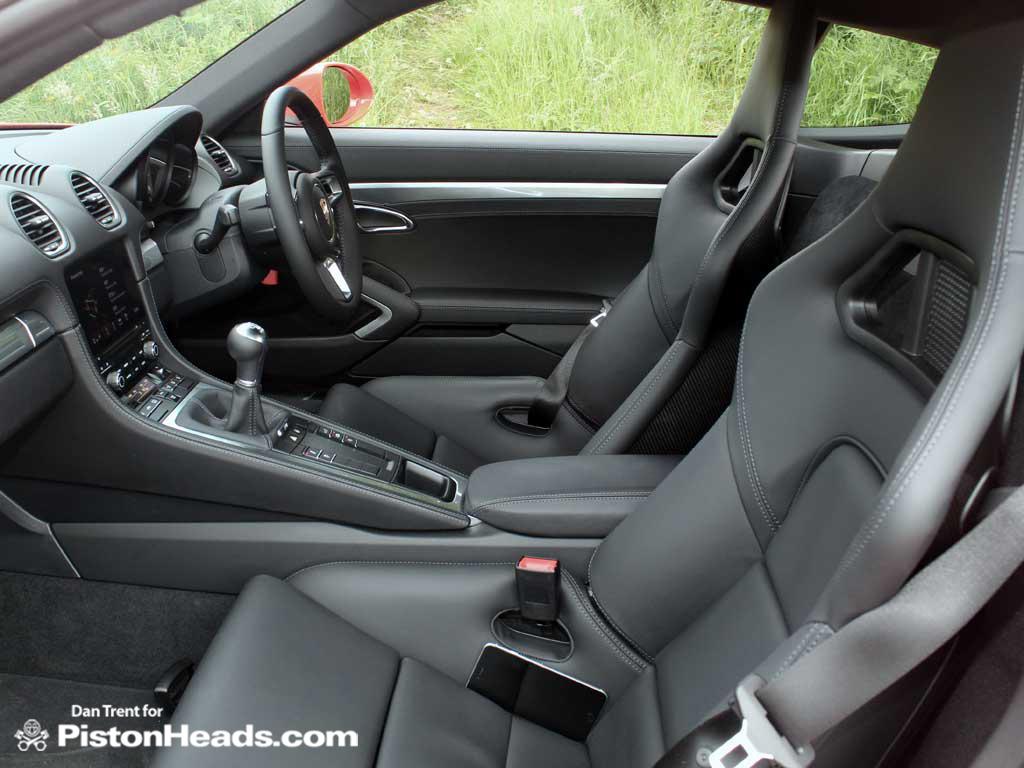 But what about the engine? If noise and neck-hair prickling top end are 'style' in terms of power delivery a road like this at least lets you focus on the substance of flexibility and throttle response. And while the flat-four definitely feels turbocharged its reactions to both part and full throttle demands are genuinely impressive - this thanks to some clever boost management. Where a blind crest has you off the gas momentarily the engine is always ready for you when you get back on it, the surge when you need to overtake much like that in the normally-aspirated six. Just from 1,900rpm, rather than 4,000rpm. With the traditionally long Porsche gearing that simply gives you more options to enjoy what, by any stretch, is a seriously rapid car. 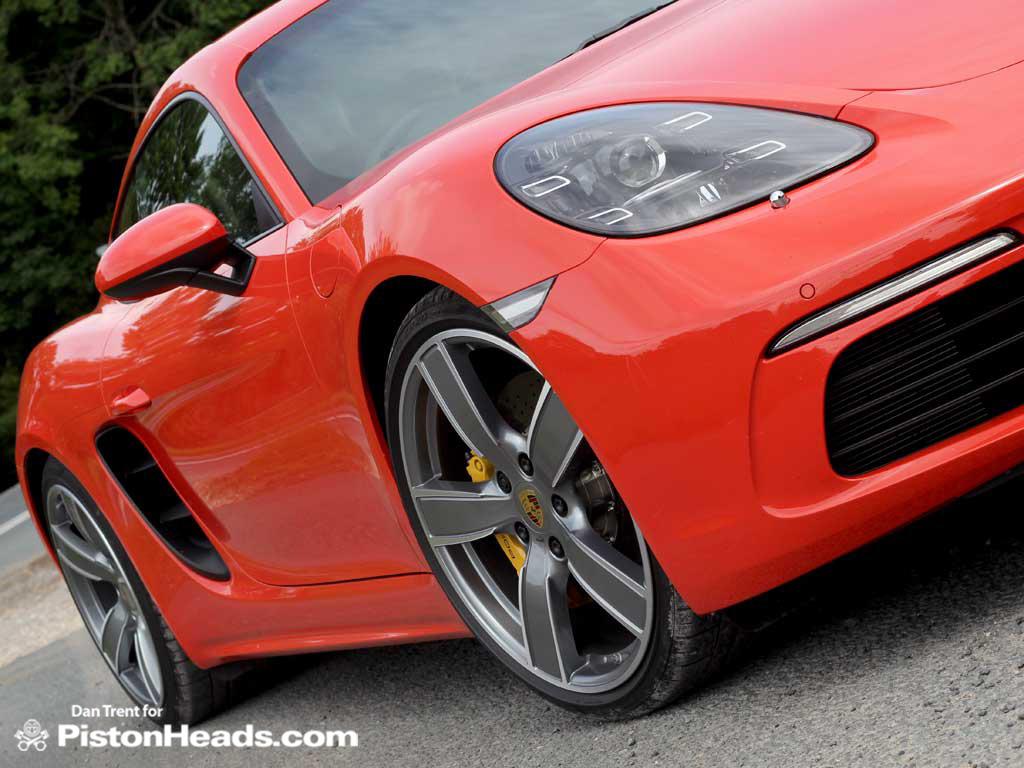 Is this dumbing down the planning and engagement you get from keeping a peakier, normally aspirated engine on the boil along a road like this? Perhaps a little. But don't think you'll fall into the habit of simply riding the higher gears and short-shifting before the real action as a consequence. Because this flat-four has low-end grunt and muscular mid-range never before found on a Boxster or Cayman. AND proper high-rev excitement too. OK, it's not quite the crescendo of the flat-six. But it's not like they've put a binary Golf R motor in the thing. And it's way more revvy and exotic than the engines used in rivals like the Alfa Romeo 4C or various Lotus options available at this price. Only the

threatens in the powerplant charisma stakes. 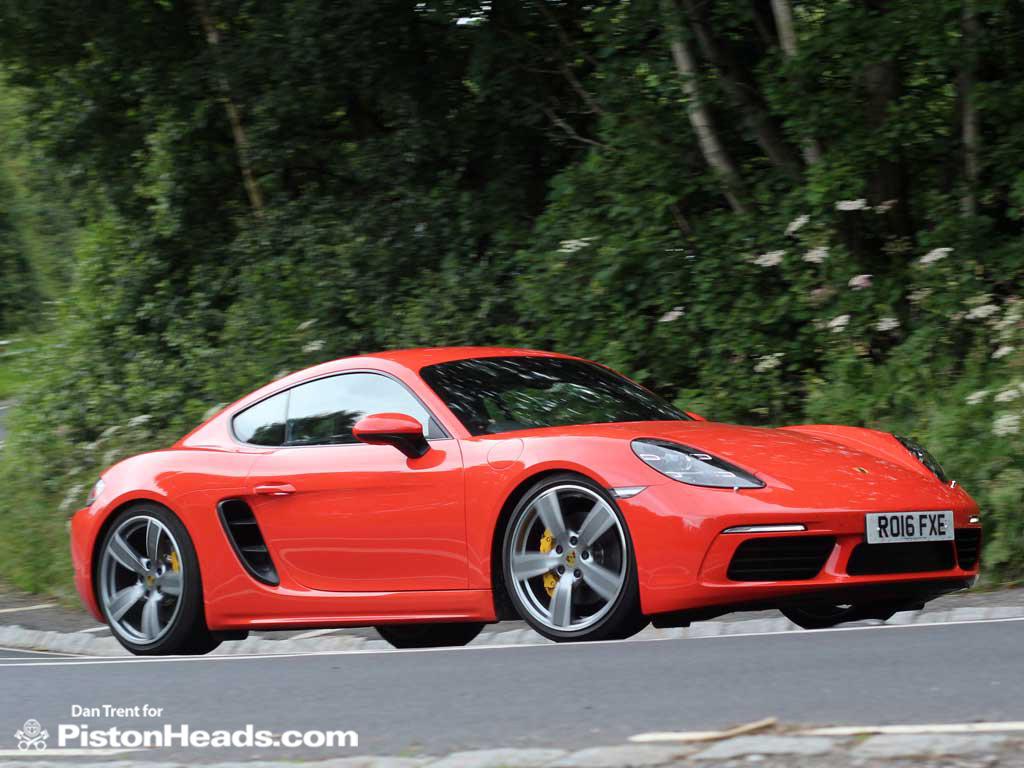 With some revs there's a harder edge to the sound too, complete with the inevitable pops and bangs when you roll out of the throttle. Whatever your take on such theatre it sounds a lot better from the outside too, though that does mean bystanders get more value from the £1,328 invested in the sports exhaust than the driver.

Driven along the same road on the same day would a manual six-cylinder Cayman GTS have put a bigger smile on your face? That remains the question hanging over the 718, at least for those of us who've always coveted the Cayman as the purest purist's sports car at this price point. As with anything it's give with one hand, take with the other. On a clear run with sufficient denial to enjoy the upper reaches of the flat-six's power delivery the previous car would probably still prickle the palms just a little more. In the real world of exploiting on-demand punch to clear traffic, enjoying the significantly increased poke and simply having more options for enjoying the Cayman's sorted dynamics, it's certainly a trade worth considering before you damn the whole concept.

And if you're still not convinced there are plenty of six-cylinder Caymans in the classifieds...