Bank holidays are rubbish, right? Riggers attempts to prove otherwise, with help from an SLS 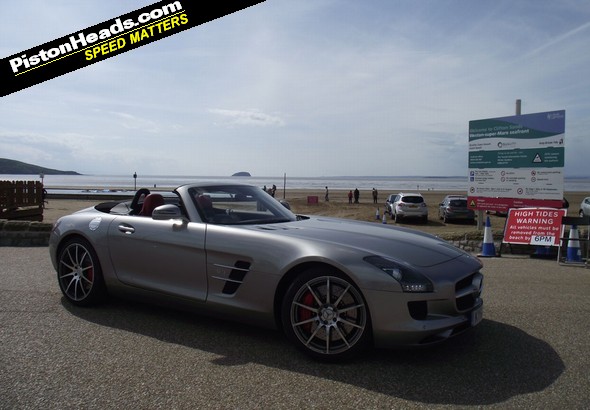 Weston-Super-Mare irritates by being pleasant

We all know bank holiday weekends are rubbish, right? Grubby weather, dreadful traffic and a strange yet irresistible urge to visit places that you would normally avoid like, well, a contagious bacterial disease. 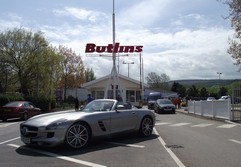 Not your usual vehicle for a trip to Butlins

How do you make a bad bank holiday into a great one, then? With this weekend's jubilee inspired double bank hol in mind we used the May one as a dry run for some classic four-wheeled escapism, helped more than a little by a Mercedes SLS Roadster. We decided to spend the weekend in it doing the things and going to the places you might be expect to endure during your stereotypical national holiday, just to see if it could make it bearable.

The destination was to be the north Devon and Somerset coast. Partly because that way lie bank holiday honey traps of Minehead, Weston-Super-Mare and Ilfracombe, and partly because the roads there, particularly down Exmoor way, might just be on the good side of fantastic.

The first task of any bank holiday weekend trip, of course, is the inevitable motorway trudge. In this case alleviated by a large detour away from the A303 around Stonehenge, still leaving plenty of the M3 and M5 to 'enjoy'. 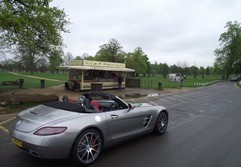 Heavy traffic and spitting rain meant speeds stayed down and the roof stayed up, but the interminable multi-lane grind did reveal two things about the car. One, that the three-layer roof does a remarkable job of sounding and feeling like a pukka coupe and, two, that the various information and entertainment systems provide a bored driver with more than enough to listen to/fiddle with on any given journey.

Once free of the heaviest westbound traffic, and on the gloriously over-named 'North Devon link road' there was time to open the glorious 6,208cc V8 up a little, and to start to enjoy the lion-gargling-Castrol-GTX soundtrack a little more, complete with cracks and bangs on the over-run. V8 howl duly enjoyed, it was time to nestle down for the night in a campsite just south of Ilfracombe. 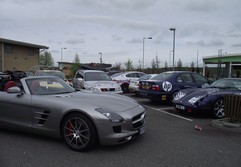 Meeting the Rally For Heroes guys

We weren't the only folks out there trying to make the most of bank holiday motoring, either. As pure chance would have it, I pulled into Solstice services for a tea break to see a load of stickered-up cars. Turned out I had stumbled upon one of the first get-togethers of the 50 cars embarking on a charity road trip called Rally For Heroes (please go and support them here!) in support of Help for Heroes and the Royal British Legion. They were wolfing down a spot of food before heading to the nearby Tedworth house personnel recovery centre. They would then head out west for a day's fundraising on the seafront at Weston-Super-Mare. Would I care to meet back up with them and use the SLS roadster to help draw the crowds? It would be rude not to.

Sun? On a bank holiday?
The following day dawned borderline sunny. While undoubtedly pleasant, this did rather spoil my narrative of 'typically crap bank holiday saved by epic supercar'. Still, it would have been churlish to complain, so it was off with the roof and on with the journey. 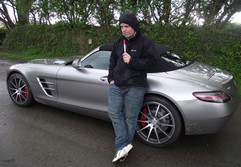 It wasn't sunny all weekend...

Threading through the narrow, high-hedged lanes you're quickly aware of two things. First, how wonderful it sounds bouncing off the late spring leaves and, two, just how big it feels in the tight and twisty lanes - where there are white lines in the middle you'll be slapping the cat's eyes on one side of the car while kicking up dust and running over drains on the other.

It's actually not all that intimidating though. The ease of use and approachability Garlick blogged about means it's easy to concentrate fully on placing it on the road. Beyond Ilfracombe, stopping briefly for snaps and the inevitable barrage of questions, the coast road clings to the coast for a while, bank holiday trundlers at least meaning we had time to soak up the view before spearing inland to Exmoor. 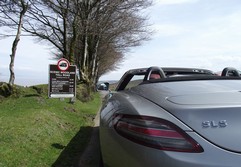 Running west to east across Exmoor is the A39 and, west of Lynton and Lynmouth the SLS finally began to be able to push on a little, revealing a fluidity and balance that seems to better the point-and-squirt nature of the coupe version. It's still a hot rod at heart - don't expect to be flinging an SLS point to point with the delicacy and precision of an MP4-12C or 458 - but it is hilariously grippy and extraordinarily rapid.

East of Lynmouth, however, the SLS did show its dynamic limitations. As we climbed up onto the more open stretches of moorland near Porlock the size and weight, and the increasingly undulating road surface, began to bounce the car around to the point where I felt for the first time I was actually in something over-engined. But these are roads that try the dynamic abilities of even the most focused lightweight special. 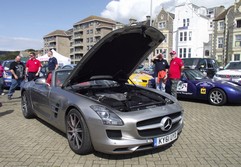 Another quick photo op at the gate to Butlins in Minehead (and another crowd drawn within seconds) and it was off to our final stop for the day - Weston-Super-Mare. By this point my bonce was feeling the pain of a morning's sun, so the roof had to go back on for the final schlep up to the Rally For Heroes gathering in Weston.

Weston is super
Weston is a place I'd never been before this point and, due to its reputation, I was not looking forward to it. But it's amazing what a spot of sunshine and some nice cars can do - as well as the Rally For Heroes guys there were various car clubs and just some generally nice motors. The SLS still drew a crowd, of course, though it was thoroughly shamed in an impromptu rev-off with the chap in the TVR Chimaera I'd parked next to...

So what did we learn from our little road trip? Well, apart from the fact that the SLS is a pretty epic car, we also learned the roads of north Devon and Somerset are lovely, that you can't even trust bank holiday weather to be reliably bad, and that an SLS plus a load of other nice motors makes Weston-Super-Mare a much more pleasant place to be... You've got four days off - why not give it a go?