A chance to test all that new E-Class technology ... and thrash an E400 around Estoril! 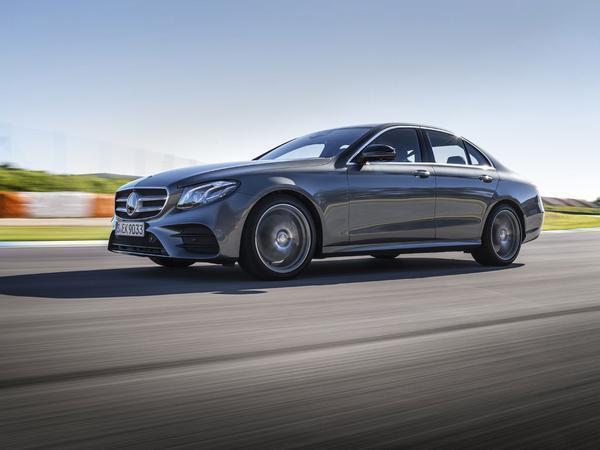 There are some murmurs of disgruntlement around the

launch, particularly the activities for the second day. Some seem to think that taking an executive saloon on track, specifically a variant of it that won't be offered in the UK, is not the most beneficial use of time. Spoilsports. Any opportunity to drive a 155mph car around a track like Estoril has to be seized upon. 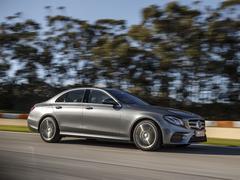 A non-AMG E-Class on circuit? It's true!

So the worthy stuff about this E-Class, the brand new diesel engine, autonomous driving technology and the various safety features, can take a back seat for a minute. Just what is an E400 4Matic like on circuit?

Significantly better than expected actually. It's only a brief demonstration of a few laps but there's more than enough to suggest that the next E63 has very good foundations to build on. It also helps that an overnight downpour has made Estoril treacherously slippery, throwing up situations that simply wouldn't have happened in the dry.

"You can stay on the brakes while turning in here" says the instructor in his CLS, a technique that seems entirely ridiculous for an E-Class. But you know what? It's great, the nose darting in keenly towards the apex and the car feeling considerably more neutral and agile than you might expect. Get greedy with entry speed (or get caught out on one of the especially icy corners) and the ESP will intervene, but not before a very progressive transition to oversteer through the initial front-end push. Traction is predictably very good too. And it's quite fast.

Of course taking an E-Class on track is not really that relevant, particularly in a car not for RHD, but it does at least prove that Merc is still interested in the fun side of driving and not simply making it yet more efficient, safer, more intelligent, more connected... 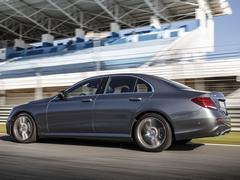 In case you hadn't noticed, the latest E-Class is crammed full of new technology. A day and a half with the car isn't enough to be au fait with all of it, but it does at least allow a good look at what's worthwhile and what seems less vital. To start a car using a smartphone and then have it charge wirelessly during the drive is seriously impressive, similarly the ability to use that phone to move it from a tight parking spot. Whether that phone would also be used to parallel park in a busy street is another matter.

Just as significant is the new Drive Pilot, an evolution of the Distronic Plus seen on the previous model. What's new this time around? It can now follow the car in front autonomously at up to 210km/h, or 130mph... At speeds of up to 130km/h (81mph), it can "continue to actively help with the steering by taking account of surrounding vehicles or parallel structures, even if the lane markings are unclear". And it can change vehicle speed to the limits detected by the camera. How does it work in the real world? Activation couldn't be simpler - just pull the cruise control stalk towards you twice - and a display in the dash tell the driver their Drive Pilot is on. It will then maintain a speed, brake when required, steer through bends and even change lanes with the indicator on for two seconds, though that latter tech won't be in the UK. It's initially pretty spooky to have steering and throttle inputs done for you, but as it continues to work so confidence builds.

Trouble is, it's not flawless. In certain instances the E-Class just didn't feel like it would respond to the situation, or it would overreact unnecessarily when it was safe and set the seatbelts to strangle mode. For the vast majority of the time it worked well, but technology like Drive Pilot must be flawless for us to trust it. On this impression it really isn't far off though. 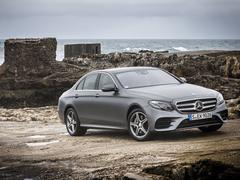 Moreover, the E-Class is so damn comfortable and luxurious that the autonomous aspect would tie in perfectly. The seats are sublimely comfortable, the driving position is ideal and the materials used throughout the cabin are exquisite. Everything from the leather to the air vents to the door handles feels of superbly high quality, the impression very much of a smaller S-Class than anything as ordinary as an E-Class. It will be interesting to see how a standard model looks - all the launch cars had the optional 12-inch Comand screen that's optional on an E220d - but for an interior ambience and technological show the E-Class is a triumph. Compared to something like a

, it feels an entire generation newer, if not more.

Which is all well and good, but what about when the driver wants to drive the car rather than admire the interior? The road drives begin in the E220d, using the "newly developed" OM654 engine. Not exactly thrill-a-minute, granted, but this will be the E-Class that UK buyers actually go for. Its vitals are competitive - 194hp, 102g/km, up to 72mpg - and Mercedes claims the engine is "exceptionally refined".

On the road, however, the new 220d can't quite match those claims. It's certainly powerful enough for a 2.0-litre four-cylinder and pretty smooth too, but more noise makes its way to the interior under load than is really desirable. At a cruise it's impressively muted, the sense of calm certainly augmented by the low 0.23Cd drag co-efficient, but the noise is noticeable again once accelerating for a slip road or overtake. 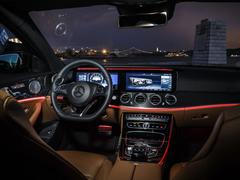 Fortunately the interior is much more inviting

The 220's weaknesses are thrown into harsh light by swapping straight for a 350d. Immediately the additional refinement is apparent, the six-cylinder diesel working away much less audibly and with a more pleasant noise when it is heard. All engines are mated to the 9G-Tronic automatic, an excellent gearbox that never gets caught out choosing a ratio. The fact it goes completely unnoticed, imperceptibly selecting gears quickly and intelligently, is the most appropriate praise for it.

In fact, the E350d feels like it could be the pick of the new E-Class range, simply because it plays to all the traditional E-Class strengths. It feels opulent, impeccably refined, fast, smooth and beautifully engineered. Sure, an XF is probably a more enjoyable car on a twisty road, but the E-Class is far from embarrassed.

Fitted with multi-chamber air suspension that's standard for the six-cylinder diesel in the UK, the E350d deals with every surface brilliantly. More aluminium in the bodyshell has made it lighter and stiffer, giving the suspension an improved base to work from. It's supple when required but very well controlled too, never compromised by the Dynamic Select settings or bad surfaces. In reality, five driving modes for a diesel E-Class seems excessive and it's often left in comfort, but the inherent quality of the engineering shines through. Even when the throttle response goes a bit too jumpy and the steering a bit too heavy... 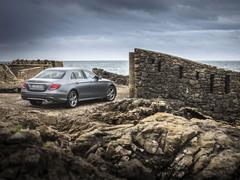 The next 5 Series better be good...

Also driven from the new range are the E300 petrol, which is very pleasant for a four-cylinder turbo but rather redundant with the E350d, and the E350e plug-in hybrid, which can cover nearly every situation purely on electricity but feels rather hamstrung by the additional weight. On the road and in the dry the E400 is pleasant yet feels caught awkwardly between a conventional Mercedes and a full AMG without fulfilling all the criteria for both. Bring on the E43 V6 and 63 V8...

Regardless of whether the styling appeals or not - we couldn't do the whole story without mentioning it - the E-Class is most definitely a class act. It has the advantage of appearing before a new 5 Series but it feels like Mercedes has done everything to ensure it will remain competitive when that car arrives. Its combination of luxury, technological innovation and surprising dynamism make for a terrific executive saloon. With the options available it might be a tricky car to spec, but the impression from this drive is that they only enhance what is a very good base product. Well, perhaps apart from the Drive Pilot. If you can stretch to the six-cylinder diesel then it certainly feels worth the premium but, whatever engine is in it, this W213 feels like another great Mercedes E-Class.