Steve Sutcliffe straps his biggest balls on for PH...

You learn an awful lot about yourself when someone throws you the keys to the world's first and only production ready Noble M600 - the one with the carbon fibre body, 650bhp twin-turbo V8 engine and precisely nada in the way of ABS - and says; "See you in a couple of days' time." 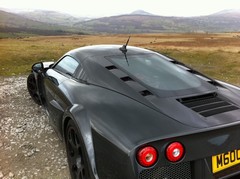 For starters, a sizeable portion of self discipline is required the first time you find yourself on an empty roundabout, just around the corner from the factory where you picked the car up not two minutes ago, to discover that the exit ahead is clear - and comes in the form of at least two miles of delicious looking dual carriageway.

For a moment you'll just wonder. And then your inner voice will either tell you to calm down, reminding you that there's a job to do here, and that there will be plenty of opportunities to let rip; or it'll tell you to rotate the M600's power button round to max, flick the traction control system off and discover, right there and then, how hot it really is in the centre of Hades.

Me? Maybe I'm getting old but, for once, I took the medium option, set the power to its 550bhp 'track' setting and left the TC button well alone - and even then I damn near had a heart attack as the 'sub 1200kg' M600 tore its way out of that first roundabout. It's an incredible machine for all sorts of reasons, the new Noble, but the traction it develops - despite being rear-wheel-drive, and despite boasting a better power ratio than most other supercars on sale - is arguably its ultimate trick. 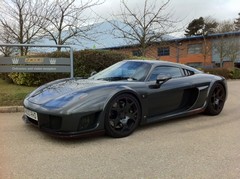 Thanks to a combination of fairly chilled spring rates, beautifully resolved damping, quite stiff anti-roll bars and, of course, monumentally wide 355 section rear tyres, it can deploy its energy with quite extraordinary efficiency. Even with the motor set to full-fat 650bhp mode, this car can take full throttle from as little as 2000rpm without lighting up its rear tyres in second gear - so long as you're pointing in a straight line and it's dry.

Out of a corner, no, you'll generate armfuls of wheelspin - and need to throw armfuls of well judged steering lock at it to avoid an appointment with the shrubs. And in the wet, don't even think about disengaging the TC. In any gear.

The point is, though, in spite of its vast power, its relatively humble design origins and its insatiable appetite for hallucinogenic levels of acceleration, when it comes right down to it the M600 isn't, in fact, the monster you'd half expect it to be. It's actually a well mannered, albeit very rapid machine that will, in the end, do everything it can to help you out - even if your inner maniac gets carried away every once in a while. 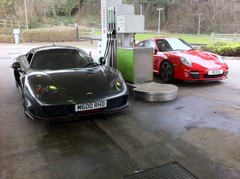 And that's what makes this car such a revelation overall because, in most respects, it's not what you'd expect it to be at all. It's about 100 times better. And this new production-spec version is very obviously the best of the lot so far.

What's different about this particular car compared with the other M600s that have done the rounds among the various magazines since last year? Quite a bit, as it happens, the big news concerning the full carbon-fibre bodyshell. This alone shaves over 50kg from the quoted kerbweight, ensuring that the M600 weighs several hundred kilos less than the likes of the McLaren MP4-12C or Ferrari 458 Italia. Which you'd expect it to given its lack of anti-lock brakes, its relative absence of sound deadening materials and, most crucially, its low-volume approach to things like airbags, safety cells etc. 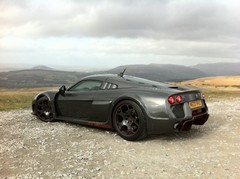 This is not to say that the M600 isn't inherently safe in a crash, but neither does it contain the passive safety features that you'd expect to find in a mainstream supercar. Think of it as Noble's 'unfair advantage' - and cross your fingers that you don't run out of talent on a soaking wet, downhill mountain pass that may or may not be starting to ice over...

What's also new, and very much improved, are the M600's brakes and its quality of finish. Not just on the carbon body (which is genuinely first class in its execution) but also inside, with things like the switchgear and the general levels of fit. Apart from the driving position (which is still a bit knees up, arms out, even for a chap with unlong limbs like me), the quality of the interior is as decent as you'd expect given the car's price, its providence and its pedigree. 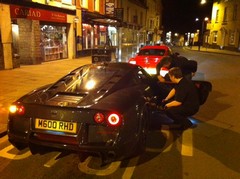 In the end, though, the 30 or so people who Noble will be looking to sell an M600 to each year aren't, you suspect, going to be all that bothered by this car's more-than-acceptable interior quality, or its surprising long distance cruising refinement. Or even its welcome ability to do 29mpg on a motorway.

Instead they will be more concerned, you imagine, by what happens when they peer over the precipice and take a good long look into the abyss. Because that, ultimately, is when the M600 needs to deliver.

The good news, both for its owners and the people who make it, is that when that moment arrives, the M600 over-delivers on its promise. From the way it steers to the way it stops to the ways it handles - and, most of all, to the way it fires you towards your destiny as if you were at the very end of some giant, industrial-spec bungee cord - the M600 is the weapon to end all weapons. The ultimate machine for people who think a McLaren is too predictable, a Ferrari 458 a touch too obvious. 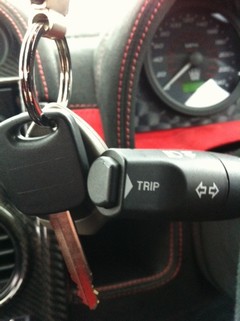 If you are of the correct persuasion (ie reasonably but not terminally unhinged), then the M600 can, and will, take you to a level that none of its competition can match. And in the end that is its unique selling point; its justification for being.

At £200k it's a fabulously expensive toy, true, but then the very best games never did come cheap.