Arguably the last of the big, bad Lambos is now from £100K - here's how to buy a good one

There was a great deal of hype surrounding the launch of the Lamborghini Murcielago in 2002. Understandable really, as this was the Italian firm's first supercar built entirely under Audi's ownership. And replacing the Diablo was never going to be easy, was it?

Neither was its path to production straightforward. Volkswagen boss at the time Ferdinand Piech disliked Lamborghini's original design. So it was scrapped, and Luc Donckerwolke from Audi was charged with penning the Diablo's replacement.

The result has all of the attitude and aggression that Lamborghini is famous for. Yet the Murcielago was more practical than its predecessor, if you could ever say that of a car with scissor doors, helped by the optional E-gear automated manual. Much of its greater usability was down to the 6.2-litre V12, an evolution of the Diablo's Colombo 6.0-litre V12, while all-wheel drive was standard on every model.

For the Murcielago, the engine received new electronic management, drive-by-wire throttle, dry sump lubrication and a bigger, broader spread of torque. With 479lb ft on offer at 5,400rpm, and 400lb ft at just 2,000rpm, the big Lamborghini is amazingly docile in traffic. If it does get a little hot under the collar, the party piece air intakes above the rear wings rise up to help cool the V12. 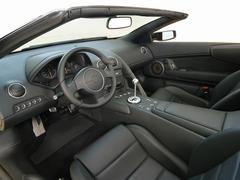 Manual Roadster must be a rare one!

Even with this more accommodating nature, 0-62mph was dealt with in 3.6 seconds and it was a genuine 205mph car. Using the power was made easier than in the Diablo as the Murcielago's engine sat some 50mm lower in the chassis, making the handling more predictable even though it was capable of higher speeds through corners. Still, the Murcielago can catch out the unwary, and 1,650kg takes a lot of stopping...

Development of the Murcielago took in the Roadster in 2004, which has a fabric roof that's fiddly and time-consuming to remove or erect. Lamborghini made no bones about the fact this model was aimed at customers in warm climates, where the roof was more an emergency umbrella.

The next evolutionary step was the replacement 6.5-litre V12 that heralded the arrival of the Murcielago LP640-4 in 2006. More power meant 0-62mph in 3.4 seconds, with top speed increased to 211mph. Naturally, a Roadster model followed, and there was a limited edition LP650-4 Roadster finished in Grigio Telesto grey paint with Arancio (orange) highlights, plus grey and orange interior trim. Only 50 of these were built. 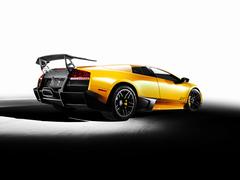 The pinnacle of the Murcielago range was the LP670-4 Super Veloce, or SV for short. Only 350 of this lightened, faster Murcielago were made, with all but a select few fitted with the E-gear transmission. Carbon fibre is used extensively throughout the SV to drop its kerb weight by 100kg compared to the LP640 Coupe, with its kerbweight rated at 1,565kg. The end result is 0-62mph in 3.2 seconds and a 212mph top speed.

The SV retained four-wheel drive to cope with its power and it was the finest handling iteration of the Murcielago, even if it had become too extreme for easy daily use. As such, it took Lamborghini right back to where it arguably belongs, as the wild child of supercar makers.

PHer's view:
"The Murcielago is quite old fashioned compared to the current crop of supercars, but that's its charm. It's a big old bull of a thing and that's what I love."
James Peters