An icon of 90s Japanese performance cars, the RX-7 is now a rare classic - here's how to get the best

The pace of development among supercars was rampant in the early 1990s, yet one of the most exotic cars of the period came from a much more humble manufacturer: Mazda. Its third generation RX-7, known as the FD, came with a twin-turbo twin rotary engine that set it apart from the herd in more ways than just its design. 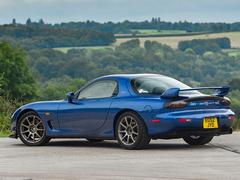 Well if there's a Bathurst available

Power started at 255hp thanks to sequential turbocharging that meant the first turbine came on song at low revs, while the second didn't kick in until 4,500rpm. That meant 0-62mph in 5.9 seconds and an engine that was unusually smooth with a very different sound to most rivals' four- or six-cylinder units.

Power was increased by 10hp in 1996 for the Series 7 models, which used an improved ECU, while the Series 8 came with 280hp when it arrived at the beginning of 1999.

Praised for its handling and dynamic ability, the RX-7 still proved a tough sell in the UK and in other important markets around the world. By 1996, Mazda dropped it from its official UK line-up even after lowering the price to £26,000 from the initial £34,000.

Buyers stayed away and sales in the UK are estimated in the hundreds, with only 164 reportedly sold through dealers. However, there are many more imports available and the ease of tuning of the RX-7 has ensured its popularity with drifters, racers and track day fans. 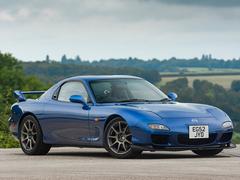 Prices are going up as numbers go down...

It remains a great road car, too, so finding a looked after example now will entertain and excite drivers who appreciate the simple rear-wheel-drive coupe format. They have plenty to choose from thanks to R, RS, RZ RB, A-Spec and Touring versions, the latter fitted with a four-speed auto in place of the five-speed manual in all the others. You may also come across cars badged as an Efini, which was a Mazda's sports brand in Japan.

Rarity has pushed RX-7 FD prices up in recent years and buyers are now more likely to want an original car than one that's been modified. Prices for a genuine UK car start at £20,000 for an immaculate example. Half that will get you an import in good condition.

PHer's view:
"The FD is a modern classic. The looks, the performance and that engine all set it apart from other coupes. Just glad I got one before prices go crazy."
John Salter