It's been four decades since the original Cannonball Run. Tom Stewart tells the tale of the original wacky race... 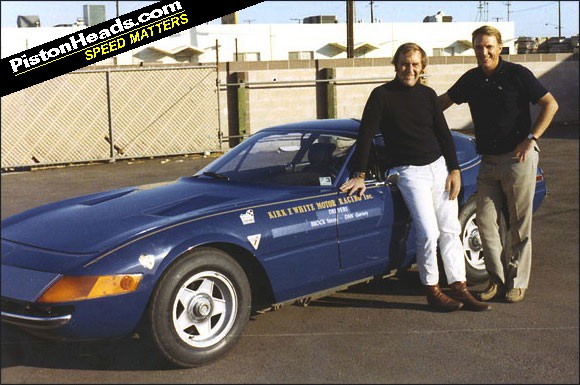 If ever there was an event that offered competitors significantly more in the way of penalties than prizes then the coast-to-coast Cannonball run of the 1970s was it.

Conceived by American motoring writer Brock Yates in early '71 - a time when the legislative emasculation of the American automobile was in germination and the Vietnam War was at its horrific peak - the second Cannonball Sea-to-Shining-Sea Memorial Trophy Dash started from the Red Ball parking garage in downtown Manhattan on Monday 15th November 1971. 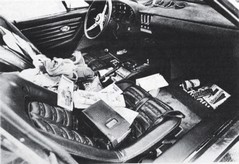 Named in honour of Erwin George 'Cannon Ball' Baker (1882-1960), who'd notched up 143 cross-country endurance driving records on both two wheels and four, The Cannonball was intended to demonstrate that "good drivers in good automobiles could employ the American interstate system the same way the Germans were using their autobahns", that "high-speed travel by car was a reality", and that "truth and justice would be affirmed by an overtly illegal act".

Unable to garner sufficient support for his first Cannonball, Yates set off from New York on 3rd May 1971 in a 225 horsepower Dodge Custom Sportsman van, aka Moon Trash II, accompanied by two co-drivers and his 14-year-old son as an additional cop detector. Among the supplies onboard were 40 bars of chocolate and 12 packets of over-the-counter caffeine tabs. They arrived at the Portofino Inn, a racers' hangout in Redondo Beach, Los Angeles, some 40 hours 51 minutes later having driven 2858 miles at an average of 70mph and 11mpg. 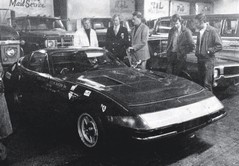 The Daytona at the New York start line

Yates reported on his solitary trip in Car and Driver magazine and soon received a telegram which read; "This constitutes formal entry by the Polish Racing Drivers of America in the next official Cannonball Baker Sea-to-Shining-Sea Memorial Trophy Dash. The drivers are Oscar Kovaleski, Brad Niemcek and Tony Adamowicz. If we can find California, we'll beat you fair and square."

The Poles weren't kidding; all three were accomplished racers and a New Jersey dealer was preparing a special Chevrolet Sportvan for them that could have its engine oil topped up without stopping and was fitted with enough auxiliary fuel tanks - 248 gallons in total - to conceivably cover the distance non-stop.

Kirk White, an exotic car dealer, had offered to loan Robert Redford a Ferrari 365 GTB/4 Daytona for the first run in May, but the superstar had other commitments. However, White still had the blue Daytona and was now offering it to Yates, so it was only left for him to recruit a suitably proficient co-driver. 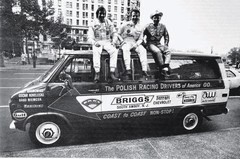 Yates called Dan Gurney, the recently retired racer with one Le Mans and four F1 Grand Prix victories to his name. He loved the idea and at first accepted, but later cried off. So Yates called Phil Hill, then America's only F1 champion. He was tempted, but declined. Next to be invited was Don 'Big Daddy' Garlits, the world's most prolific Top Fuel drag race champion. He also accepted, but had business commitments that couldn't be rescheduled.

Then, the day before the race, spurred on by a 'do it' message from his critically ill father-in-law, Gurney phoned Yates from LA to accept.

Many entries dropped out as the race drew nearer, but seven remained. These included the PRDA's 3.2-tonne (fully fuelled) Chevy van, and a 1971 Cadillac Sedan DeVille. The Caddy was entered by two lawyers and an engineer from Massachusetts who'd seen a small ad placed in the New York Times by an unwitting Long Island gentleman, who would pay expenses for his nearly-new car to be 'delivered' to California, but who'd stated that it must only be driven between 9am and 8pm, and never at more than 75mph. 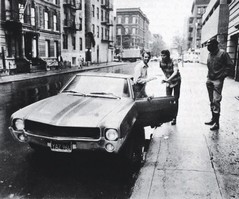 The Bruertons and their AMC AMX

Other participants included two guys in a near-standard MGB GT who'd only recently met, the Bruerton brothers in their 90,000-mile AMC AMX, two eclectic teams in Dodge vans - one of them Moon Trash II - and five others in a 1966 Dodge/Travco motorhome.

Various gentleman's agreements for the run were already in place, most importantly that neither cars nor individuals would piggy-back via rail or air. Vehicles would start from the Red Ball Garage, ideally at one-minute intervals from midnight, although anytime from 00.01 to 23.59 on the 15th would do. Then came a reiteration of The Rule. "All competitors will drive any vehicle of their choosing, over any route, at any speed they judge practical, between the starting point and destination [The Portofino Inn]. The competitor finishing with the lowest elapsed time is the winner." Apart from the Poles requesting 'pole' position, and the Bruertons stating that they'd be grabbing a few hours sleep first as they'd just driven 44 hours to New York from the Portofino Inn, that was it.

Victory, the SK Handtools 'Nutmaster' Trophy and not a cent in prize money went to the Gurney/Yates Ferrari, which completed its 2863-mile dash in 35hrs 54mins at an average of 80.8mph. En route they encountered wiper failure, sheet ice at 125mph, over-inflated tyres in snow and a $90 speeding ticket for an alleged 135mph in a 70mph zone. The Daytona drank 200 gallons to return 14.3mpg - the most frugal vehicle to complete the trip.

Just 53 minutes behind was the PRDA Chevy. It stopped once for seven minutes in Albuquerque to take on another 65 gallons, and somehow avoided any brushes with the law. Kovaleski claimed that they "endeavoured to remain within the speed limit at all times", but the PDRA still averaged 77.2mph for their entire 2840-mile drive and at one point touched 128mph courtesy of a long, downhill stretch in California and tall final drive from a Le Mans Corvette. 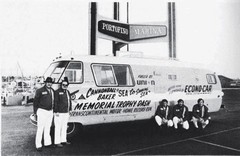 ...but they would get there

In third place was the 'delivery' DeVille. It finished nine minutes adrift of the Chevy, having stopped 15 times for fuel and least another five times for the 'smokeys'. The Caddy's average on-the-road speed for 2855 miles, excluding stops, was almost 85mph - the fastest of all, Ferrari included.

The remaining teams all finished within a little over three hours of the Ferrari's winning time, apart from the MGB and the motorhome. The MG fell foul of a slipping clutch in Ohio, while the motorhome took 57hrs 25mins (average 50.8mph) to reach the finish. But the crew achieved what they'd hoped for, namely, to set a Guinness world record for a transcontinental crossing by motorhome.

As PRDA member Brad Niemcek remarked soon after, "The event was run without accident or injury, but the law did take its toll". Reports vary as to how many tickets were issued (at least 10), and the Cadillac crew narrowly avoided arrest for allegedly stealing gasoline (apparently there was a 'misunderstanding' between them and a sleepy gas station attendant), but Yates still staged three further Cannonballs in '72, '75 and '79. From those sprung a handful of daft, Cannonball-inspired films during the early '80s, which in turn inspired a plethora of ersatz cross-country driving capers - mostly patronised by rich kids in supercars.

But it was that epic November '71 Cannonball which, however illegal, antisocial, rebellious, unjustified or otherwise, found its way to the highest echelons of automotive lore.

Thanks to www.allamericanracers.com and Car and Driver magazine for the images.

[NB. All references to gallons and mpg are imperial measurements.]