We celebrate the glorious history of a PH Open Season hero

In the beginning - the very first 900 Convertible prototype

Before 1983, associating a Scandinavian car company with soft-top motoring was a little bit like having a smooth-running railway network in the UK - a rather unusual state of affairs. 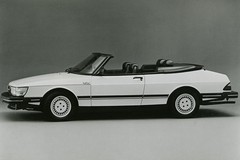 But at the Frankfurt motor show in September of that year Saab revealed a prototype soft-top 900 so secret that it had been disguised while under wraps on the stand as an estate by the cheeky insertion of a plastic block on the bootlid.

When the wraps came off, the reaction from the waiting press - and showgoing public - was so positive Saab couldn't help but put it into production.

That finally happened in 1986, and ever since then the four-seat Scandinavian has proved an enduringly popular alternative to more mainstream convertibles - and particularly for those who want something that isn't made by Mercedes, BMW or Audi. 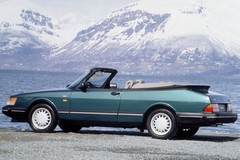 And for a while at least the Saab convertible became

soft-top to have - at least if you couldn't afford a 911 or needed more than two seats. So we couldn't let the PH Open Season go by without investigating the history of such a significant symbol of modern top-down motoring.

In The Beginning:
As we've already mentioned, the Saab 900 convertible first basked in the public spotlight at the 1983 Frankfurt motor show, but its journey there was - appropriately for Saab - rather unconventional. 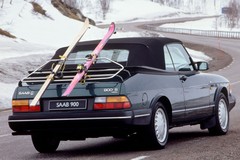 It started in 1981 when Saab-Scania's US boss, Robert J Sinclair, spotted what he felt was a huge gap in the market for a medium-sized four-seat convertible, a market that US car makers (and, for that matter, many other car makers around the world) had almost completely abandoned for fear of hysterically stringent safety regulations.

A team of Swedish engineers, with the soft-top help of the American Sunroof Company, duly turned Sinclair's idea into a prototype with a rumoured development budget of just $30,000.

The idea of a sun-seeking soft-top being built in a land of snow and ice proved to be a captivating idea and, after the positively white-hot reaction to the show car in the autumn of 1983, Saab management gave the go-ahead for production in the spring of 1984, and the first cars were ready in early 1986. 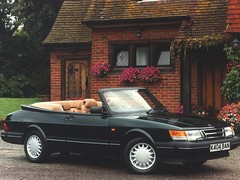 The production car proved the motor show hype right. Most of the first 400 cars - destined for the US - were sold before they hit the ground and when the car went on general sale in 1987 Valmet, the Finnish coachbuilder tasked with production of the 900 Convertible, couldn't keep up with the unexpectedly high demand. A 12-month waiting list initially developed before Valmet expanded its production facilities.

Saab had planned on building no more than 2000 cars a year, but by the time production ended in 1993 49,000 had been produced, well over three-and-a-half times the original planned build rate. 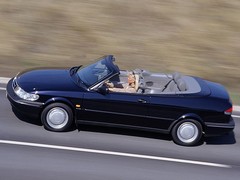 Unlike many of its competitors, all variants of the Saab Convertible were equipped with a powered roof as standard, as well as leather upholstery. And the Convertible always had a glass rear screen fitted, not a plastic substitute prone to cracking and fogging. It was even electrically heated to quickly defrost in sub-zero temperatures. The exceptional power of the car's heater also encouraged the dropping of the roof even in winter (which we most definitely approve of).

During its seven-year run, the 900 Convertible was barely changed, aside from a naturally aspirated motor joining the original 175bhp turbo model, and a slant-nose restyle early in its life. 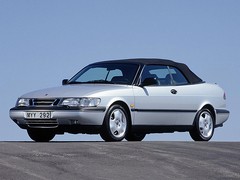 The second generation of 900 Convertible (which was later renamed the 9-3) was even more of a commercial success than the first, with 140,500 examples finding their way onto the world's roads between 1994 and 2002.

But all was not necessarily rosy in Saab world. The so-called 'New Generation' Saab Convertible did feature some improvements, notably a flush-fitting 'Tonneau' cover for the soft-top and hydraulic as opposed to electronic hood operation, Saab was now under the stewardship of General Motors and the use of Opel/Vauxhall Vectra underpinnings alienated some hardcore fans, who felt it went against Saab's historical ethos of innovation. 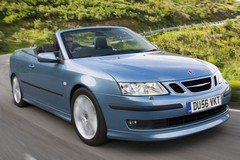 The third iteration of the four-seat Saab Convertible formula has been around since 2005. Although its Saab genetics have been further diluted - it still shares its undercrackers with the last Vauxhall Vectra, and the venerable Saab slant four engine was dropped in favour of GM-sourced Ecotec motors - the visual link with the first car is clear. It is also still determinedly a front-wheel drive, turbocharged affair.

The current generation is slated for the axe in 2012, when a new 9-3 comes on stream.

Spitfires To Jaguars At Castle Bromwich