The inside line on Nissan's DeltaWing, from designer Ben Bowlby and driver Marino Franchitti

You may not have heard of it (yet), but it could be the future of world motorsport 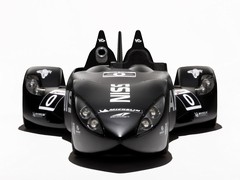 Yes, it looks like the Batmobile - can we move on?

Is it a bird? Is it a plane? Well, sort of on that last one actually, or at least that's where the DeltaWing Le Mans prototype gets its name from. Think of Concorde (you probably already were) and you're somewhere near.

The DeltaWing project has been knocking around for a while, and though having secured a place at this year's Le Mans 24 Hours under the Automobile Club de L'Ouest's 'Project 56' experimental technology entry, it hasn't had an engine to power it. Until now.

Nissan has now revealed it will be backing the DeltaWing project as an official partner with the tripod-like racer getting a 300hp, 1.6-litre turbocharged four-cylinder motor loosely related to that of the top-spec Juke 1.6 DIG-T. Not the sonorous V12 or intricate experimental petrol-electric hybrid powertrain you might have been hoping for given the car's Batman's-trackday-toy looks. But the stealthy racer is really quite an innovative, well thought out and truly relevant project, based on existing technology in order to keep costs (relatively) low and maximise efficiency. 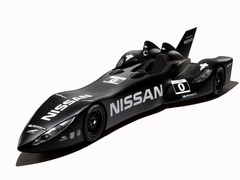 And there's that word most of us wouldn't associate with the glamour and excitement of motor racing - efficiency. But while most driving enthusiasts see it as a byword for dull and drab motoring, with power reined in to improve fuel economy efficiency in racing actually means more speed.

The whole concept has been based on a strategy of half the weight and half the drag of a conventional LMP car, and in doing so has allowed the DeltaWing's engineers to halve the tyres' effective contact patch at the front, therefore halving the friction and drag thanks to that cigar-like front profile. Importantly, that means fuel consumption is also cut by 50 per cent. 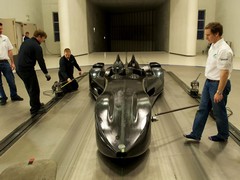 According to DeltaWing's Chief Designer Ben Bowlby, "to halve the drag the DeltaWing doesn't employ any wings, relying solely on downforce created by ground effect and the car's body." That means it'll be extremely slippery down the 3.7-mile long Mulsanne Straight and the reason why it can achieve speeds of a modern prototype with under half the power. But more importantly, it'll be affected less by turbulent air in traffic - a massive factor with 56 cars on track, even if the Le Mans lap is eight and a half miles round.

On the pace
Bowlby is bullish about the programme's prospects, citing, "the ACO has given us a target lap time of 3:40 around Le Mans [that's in between LMP1 and LMP2 pace] with an intended top speed of 300km/h." The latter of which DeltaWing has already exceeded in testing. 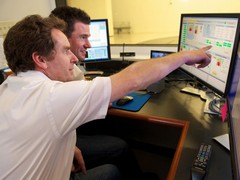 Bowlby (foreground) is confident about pace

For those of you thinking pie-in-the-sky stuff and recalling examples such as Aston Martin's ambitious but ultimately doomed attempt at Le Mans last year (the DW is actually loosely based on last year's Aston LMP1 chassis), you might be surprised.

So how does it drive?
According to Marino Franchitti, now confirmed to drive the car at Le Mans, "it's like a normal racing car - it has its own idiosyncrasies but it's easy to drive. You have to apex a corner with the rear wheels as opposed to the fronts in a normal car, due to the rear being the widest point, but it handles really well and is easy to position. Everything is very progressive and the aerodynamic balance is very consistent and controllable - it's just like a normal car when it breaks away." 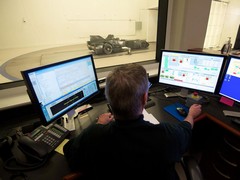 Half of everything is the theory...

Under that slim nose are two specially developed tyres from Michelin just four inches in width. And that's all the rubber DeltaWing has to play with up front. Yet despite the comparative lack of rubber the team is boasting of corner speeds similar to more conventional prototypes.

That's because the car's weight distribution is biased rearwards to the tune of 73:27, putting all the mass behind the centre of gravity and offering excellent stability, especially in a straight line and under braking. The car's brake balance is weighted towards the rear too, making use of the significantly larger 12.5-inch wide rear tyres. That rearward weight distribution should mean less weight transfer under braking (well over 50 per cent of the braking force is behind the centre of gravity), as well as more traction under power, equating to a less wayward tail than you might otherwise imagine.

Going the distance
"With only 40 litres of fuel to carry and much less mass we're hoping to go further on a stint than the regular prototypes," reckons Franchitti. And we can well believe him. From the time the Scot has already spent behind the wheel of the DeltaWing, he outlined that triple-stinting tyres at Le Mans won't be an issue, and that the car's inherent, almost benign balance - despite its outlandish looks - means degradation in the rubber won't upset the chassis or bite the driver. 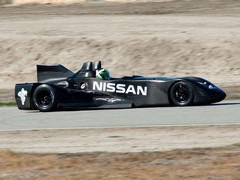 DeltaWing has proven itself on track

It's a futuristic looking piece of kit, and there are some proper innovations in the design - not least the clever "half everything" principle and its manifestation in the metal (or should that be carbon fibre). The developments in efficiency through reduced drag, lower mass and a small turbocharged engine are relevant to the future of road cars as well.

According to Nissan Europe General Manager, Darren Cox, "DeltaWing is about innovation and relevance to road cars. The developments in efficiency will challenge the way people think about motorsport and benefit road car progress in a sustainable way through real-world technology - downsizing and improving aerodynamic efficiency as two examples."

That's all well and good for the future, but in the here and now the DeltaWing has a job to do.

"The car is the first real wholesale change since putting engines in the back of Formula 1 cars or the development of wings - fans are drawn to it and it's so important in engaging the next generation of sportscar followers. It's great to be involved in something so exciting," believes Franchitti.

It won't be competing for the podium proper, unfortunately, as it's in an experimental class of one. The team has been warned by the ACO to not get in the way of anybody's race, and it's well aware of that. Given the claims it's making though, Franchitti and Co. might not have to be checking their mirrors all that frequently.

The Long Read: 40 reasons to race a Caterham