Britain does a fine line in continental cruisers, and here's the PH pick of the best!

There are those who will delight in pointing out that the GT in GT cars is actually short for 'Gran Turismo', and that such a nomenclature would seem to indicate an Italian connection. This may be true but, damn it all, surely everyone knows that the finest and most proper recent GT cars have hailed from Britain? 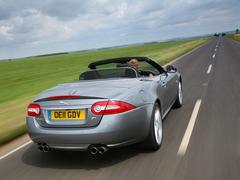 See, there's a GT for nearly every budget

Such machines are, we romantically suppose, imbued with the sweat, toil and passion of the designers who drew them, as well as the specialists who built them and the enthusiasts who yearned after them. After all, was it not the British who invented the Grand Tour? No, wait - not that Grand Tour. I mean the original Grand Tour. You know, the one on which rather well off young men fresh from Oxbridge would trot off to discover the charms and art and culture of Europe and beyond, before settling down to the inevitability of married life and a career spent in a bank/operating theatre/law court/the House of Lords.

Yes, it was, and for that reason the British grand touring car, distinct from the common sports car or irrelevant supercar or loutish hot hatchback, is surely to be considered the very pinnacle of motoring sophistication. You could argue that the initials 'GT' have been debased over the years by various over-commercialised motor racing activities and the plastering of them over far too many lacklustre family cars, and I would not disagree with you. But to be behind the wheel of a proper GT, with a flexible, powerful and - above all - refined engine, and a layout that provides effortless performance and a decent range, seated in a luxurious interior that wants for nothing, with enough room for a small gathering of loved ones and luggage, is to enjoy one of the very finest motoring pleasures that man can achieve.

Here we've given some of the finest British GT cars the Market Watch treatment. We've taken prices from our PH classifieds section, and we've found some very reasonable second-hand examples starting from as little as £12,000, the price of a new Vauxhall Adam...