Well if you really want to tour Europe in style...

No other car does wafting like the Rolls-Royce Wraith. Pretenders to the throne line up every year to outdo its supreme levels of splendid isolation, from Lexus to Mercedes-Benz and taking in Tesla, but so far the Wraith still reigns supreme. 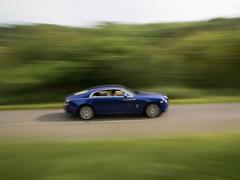 With 632hp you can go really very fast

Being based on the Rolls-Royce Ghost is not a bad start (and, before you mention it, let us draw a gentlemanly veil over the BMW 7 Series underpinnings - this is most definitely a British tour de force). Having a 632hp, 6.6-litre, twin-turbo V12 is not a bad way to go about things either, but you probably won't even be aware it's there, because you'll never hear it. Not even if you rather ungraciously boot the throttle to the floor. Do so and you'll arrive at 62mph just 4.6secs after setting off, and you won't stop until the electronic limiter kicks in at 155mph. You'll be aware of the front of the car rising slightly and a vague whoosh as the old lady lifts up her skirts and sprints, but that'll be it.

Does it go around corners? Yes, after a fashion. You turn the wheel and that long bonnet follows your directions, more or less. It's actually lower than both the Ghost and the Phantom, but that's not saying much - so is St. Paul's Cathedral. None of that stuff really matters, though; this is no fractious sports car, after all. What it is is a highly refined, luxurious and very exclusive gran turismo, able to hold its own on any major road you might throw at it as you venture across Europe to your villa or five-star hotel.

It's also a truly massive sense of occasion. The extra-long doors are rear-hinged. The interior is a work of art, with an unmatched sumptuousness and an almost peerless quality to everything you see and touch. No surprise that the Wraith weighs in at 2,360kgs and costs a fraction over £235,000, then, and that's before you add in anything from the extensive RR options list. 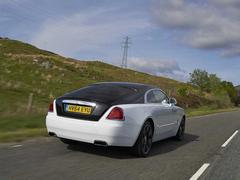 This is pandering to popular taste, right?

So you could have a good example of all of our other three grand tourers for the price of just one Wraith, and still have enough change for a very long luxury holiday. Worth it? Up to you. The Wraith is alone here in housing impressively modern technology in a fastback car of unparalleled grace, while feeling to all intents and purposes like a superyacht. Sometimes it's best to accept no substitutes.