Ford Focus RS: by the numbers 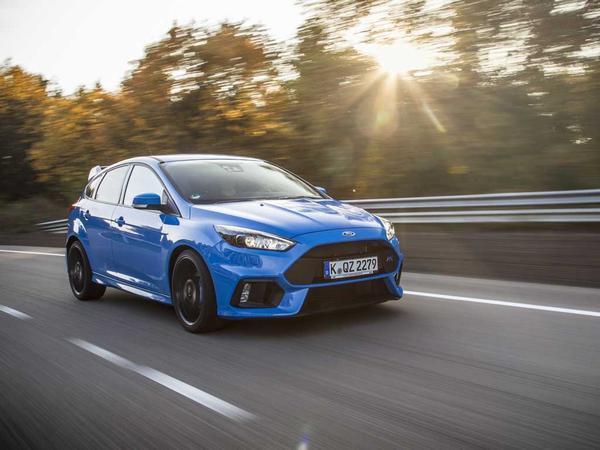 As you read this we'll be driving the new Ford Focus RS. Someone has to, etc. Anyway, exploring the much touted Drift mode with one hand and attempting to type with the other sounds like a recipe for spectacular disaster so we'll do the sensible thing and keep both hands on the wheel for that. Here we'll crunch the numbers, attempt to put the car into context against its rivals and see if it really does stack up on paper before we turn a wheel. 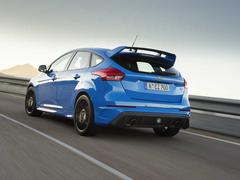 Five-door and manual only for the new RS

There are many reasons to be excited about the

our most-read story from the event. Consider what you get for that money and it does seem

. 350hp and 324lb ft (347lb ft with 15-second 'transient' overboost) is a thumping advantage over nearest rivals from the off. The most obvious contender - and car the Focus RS is set to depose as essential Internet Benchmark For All Things - is the

On its own the power advantage sounds enough to floor most Golf R-based arguments but the Focus follows up with a further kick to the nads in terms of chassis tech. Obvious bling like Brembo calipers will count in the car park comparisons but the torque vectoring Ford Performance All-Wheel Drive would seem to address common criticisms levelled at comparable four-wheel drive hot hatches. The Golf's Haldex system is better than most and can manage front to rear torque distribution. But across the axles it's left to brake nibbling ESP; effective but inevitably not as proactive as even VW's VAQ system used in front-driven cars like the Golf GTI Performance and SEAT Leon Cupra. 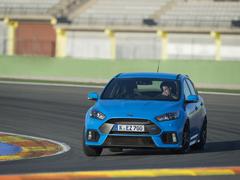 Four to the floor

Ford uses two electronically controlled clutch packs either side of the Rear Drive Unit which can open and close according to the various inputs from steering, throttle, stability control and brake sensors. There can be a degree of smoke and mirrors when discussing theoretical torque splits in comparable four-wheel drive systems but Ford claims up to 70 per cent can be directed to the rear axle and proactively distributed across it by the two clutch packs, according to which of the four driver modes you happen to be in. On the basis you're man enough to keep your foot in through a corner the Focus can, in theory, neutralise understeer via the throttle by sending more power to the outside rear. Or, in Drift mode, supposedly offer some proper sideways action. Does it work? We'll report back but in hardware alone it's impressive for a sub-£30K car.

Two-mode dampers are also a notable feature given the price point, these working in conjunction with spring rates raised by 33 per cent front and 38 per cent rear over the ST. In the Sport setting the dampers are a substantial 40 per cent firmer, shorter steering links and 'optimised' front suspension knuckles apparently improving steering feel although not as fancy as the previous RevoKnuckle design. Stiffer suspension would be pointless if the undamped body flexed like a soggy dishcloth but this has been addressed with additional bracing, particularly in the rear body structure and subframe. Overall the body is nearly a quarter stiffer than a regular Focus. 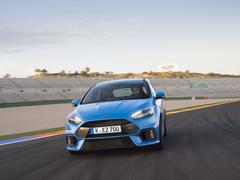 61 per cent of UK orders are Nitrous Blue

Is that starting price merely a headline grabbing 'nominal' sum demanding numerous options to really deliver though? In fairness the substance - the chassis technology, the driving modes, the brakes, the 19-inch wheels, the Michelin Pilot Super Sport tyres - are all included in the base price, as are standard Recaro branded seats. So even without a single box ticked your Focus RS will drive like a Focus RS. In the Ford style options prices aren't unreasonable, including a £1,000 Luxury Pack with power mirrors, parking sensors, cruise control and privacy glass, fancier £1,145 Recaro seats, £465 for the Sync2 nav with rear camera, improved speakers and sub-woofer (expanding on the standard touchscreen operated DAB unit) and £595 for 19-inch forged wheels. The 950g per wheel saving in unsprung weight from the latter adds functional as well as aesthetic appeal. Even with every box ticked and the most expensive £745 Nitrous Blue paint option the RS is less than £35K, or £34,905 to be precise.

Ahead of first deliveries in the spring Ford is reporting 2,300 orders in the UK alone, with 89 per cent of buyers going for the Luxury Pack and 85 per cent choosing the forged wheels and setting them off with the £100 blue paint option for the calipers. Nitrous Blue is the most popular colour - 61 per cent - and more than half have opted for the fancier Recaro seat option.

Everyone will be comparing it to the Golf R (box, ticked) but in spirit the Focus RS is playing to a rather different crowd. The lack of an auto or dual-clutch option is one sign of this, the Ford clearly aimed at a more single-minded and enthusiast audience less fussed about the under-the-radar and everyday abilities of cars like the Golf and closely related Audi S3. 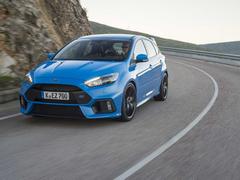 Will a portly kerbweight hamper the RS?

Nope, we need to be considering more extrovert cars. The comparably priced

would be an obvious one, its 300hp looking a little outgunned but, as we found over our

, the more traditional, mechanical four-wheel drive system delivering genuine purist thrills. Some will prefer the Subaru's four-door design too. But it's hard to escape the fact many will consider the hot Subaru yesterday's hero, the Focus very much of the here and now.

In spirit the Focus's closest rival is probably the Civic Type R. OK, the Honda is 'only' front-wheel drive but it packs a comparable level of chassis technology - active torque distribution, adaptive dampers, new-school turbo engine and the rest - with properly wild looks. If acceleration times are a measure that matter to you the Ford's launch controlled 4.7 seconds is a whole second quicker than the Honda's, the Civic 2mph quicker at the top end though. Around a track the comparison will be a very interesting one - bear in mind the Honda boasts proper aero and weighs 217kg less* than the Focus.

That's a significant chunk, the Focus RS's 1,599kg kerbweight (with driver) perhaps the one big number Ford won't be too keen on emphasising. Even in heaviest five-door, DSG equipped form the Golf R is 1,525kg, the same as a BMW M135i with the chunky eight-speed automatic option. At the other end of the scale a Peugeot 308 GTI 270 is just 1,280kg; still a fair chunk by traditional hot hatch standards but a positive flyweight these days. All numbers are comparable 'with driver' EU weights unless otherwise stated.

0-62 and top speed matter in pub comparisons but on the traditional twisty B-road these cars are built for power to weight and agility are arguably as important as the way the car feels at maximum attack. With that chunky kerbweight the Focus's advantage is less obvious, offering 218hp per tonne against 224hp per tonne* for the Civic Type R. It still outguns the 199hp per tonne of a five-door manual Golf R but the real winner in this competition is the often underrated SEAT Leon Cupra. 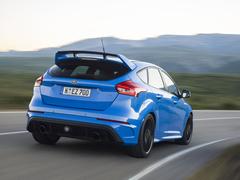 Enough talk; time to get driving!

Now uprated to 290hp, its power-to-weight is 208hp per tonne but, with that trick front axle 'diff', adaptive dampers as standard and a starting price of £28,375, it's a hard-hitting alternative offering impressive value for money. Its looks are a little conservative but there is a three-door option for the hardcore of hot hatch fans who wouldn't be seen in a five-door. The SEAT offers that too, along with DSG and estate options as well.

And no talk of hot hatches can ignore the Megane Renaultsport. OK, it's getting long in the tooth now. But a starting price of £23,935 for the 275 Cup-S looks astonishing value for money for what is still one of the best handling hot hatches of recent times. Trick it out with £2,000 Ohlins dampers, a £2,500 Akrapovic titanium exhaust and £1,000 Michelin Cup 2 tyres and you're still (just) undercutting the Focus and ending up with a car of still class leading road and track performance. Less of an all-rounder, true, but arguably still the hardcore choice.

At the end of all that the Focus STILL looks one hell of a package, even if its supposed killer blows aren't perhaps quite as decisive as they first seem. Proof will be in the driving of course. Time to get behind the wheel...

*Honda doesn't quantify its claimed 1,382kg base kerbweight or say whether it's with or without driver. For the sake of argument if it's without and you add a 75kg driver the power to weight is 213hp per tonne and its weight advantage over the Focus 142kg.

(Figures in brackets for automatic)