What, and you thought because

back we'd stop talking about it?

Planned as a culmination to our series of M135i versus the world articles, what follows is perhaps a wider ranging story about the state of the modern 'everyday' performance car. By everyday we mean the kind of car you might possibly buy on a company ticket, or one that'll cover all household bases from the school run to the early morning hoon and occasional track day. So at least the option of five doors, vaguely realistic running costs, a boot big enough to carry the shopping and comforts (actual and creature) to keep you sane on the daily grind. 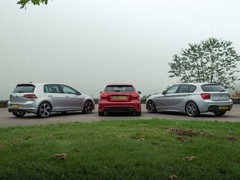 Fast cars for, whisper it, the real world

Not so long ago when the car buying hierarchy was more straightforward and more clearly defined your choice would have been progressively faster and fancier European front-driven hatches leading to, probably, something rear-driven and Bavarian. The alternative to that probably Japanese,

and the like requiring (financial) commitment to run but giant-killing on the right road and in their day.

But the goalposts have moved, and how. Taking our M135i comparisons as a core, 30-ish grand will today buy you a Ford, VW, Audi, BMW, Mercedes, Renaultsport or similar with enough power (200-odd horsepower to 300-plus) to blow supposed performance models of just a decade ago into the weeds. You can have front-driven, rear-driven or four-wheel driven, four-cylinders, six-cylinders, manual gearboxes, autos, dual-clutches and in pretty much any combination you fancy. Active differentials, 'e-diffs' and good-old fashioned mechanical locking diffs, adaptive dampers and specific outputs in the supercar scaring league - all are now available for relatively 'sensible money'. 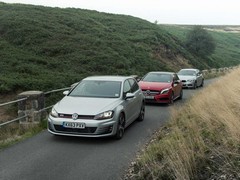 Take your pick of tech and fill your boots

For this test we've got a 230hp front-wheel drive

with the optional active locking differential and a six-speed manual gearbox. At £27K it's the cheapest here. Option two costs, on paper, nearly £10K more but experience suggests BMW dealers are amenable to haggling and in reality the price difference between the Golf and M135i is narrower than it appears. Unless you're talking performance. Comprehensively hammering the final nail into the Japanese rally rep coffin, meanwhile, is new arrival to this party, AMG. 180hp per litre from a 2.0-litre four would have been for the committed just a few years back but now comes with a Mercedes badge on the front, four driven wheels, a hatchback body and more youthful swagger than we've ever seen before.

Consider this as your homepage; from here you can click to more in-depth assessments of the cars and some conclusions. And for reference here are links to our comparisons between the BMW and other cars we picked out in this vaguely defined up to c. £30-£40K/c. 200hp-300hp bracket.

All mpg figures NEDC combined, all prices before options