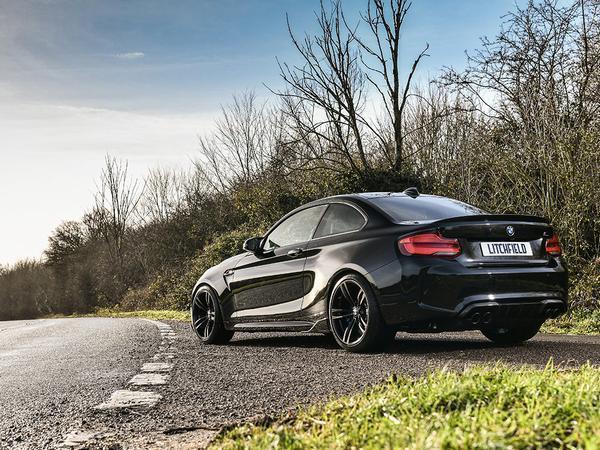 The memory of that day on the North York Moors still gives me chills. The BMW M2 was fresh in the country at the time and we'd driven it to the frosty north to test it alongside a couple of rivals. With snow and ice piled up by its fringes, the surface of the road can't have been much warmer than freezing. I had driven the littlest M-car on a marble smooth track in warmer conditions the day before, pointed it up the A1(M) that evening and pretty much fallen in love with it. Twelve hours later the love affair was over.

Numb steering gave no impression at all of what the front axle was up to. Rock-hard rear tyres didn't stand a chance against a big wedge of turbocharged torque and a frigid road surface. Over the crests and undulations that pepper the moors like discarded burger wrappers outside a McDonald's, the M2 had so little body control I was convinced on more than one occasion we had been spat off. And that was with 370hp. If you had handed me the keys to a modified M2 with 540hp, I'd have zipped my coat up to my chin and walked the 170 miles home instead.

Ever since BMW announced it was replacing the M2's once-turbocharged straight-six with the twin-turbo S55 engine from the M3 and M4 - and labelling the new model M2 Competition - it was inevitable that tuners up and down the land would be having their way with it at the first opportunity. The likes of Litchfield Motors near Tewkesbury have been squeezing enormous power out of the S55 motor with new engine maps since it was introduced in 2014. Doing the same thing to the same engine in the M2 Competition would be no more onerous than plugging in a laptop and tapping a few keys.

But it isn't just the higher specification engine that's made this all possible. Because if you'd armed an early M2 in its original state - iffy body control, squidgy rear end - with 540hp, it would have been undriveable on anything other than a smooth, dry and warm race track. I think the car you see here owes its existence as much to the M2 Competition's vastly improved chassis (with its solidly mounted rear axle, additional shell bracing and night-and-day-improved body control) as to its twin-turbo engine.

'If you'd put this power through the old M2 you'd have really struggled,' says Iain Litchfield, unprompted. 'But it really works on this car. We've had our own M4 for almost five years so we know the engine inside out. Tuning this M2 was therefore a very quick process. Its particulate filter is very restrictive so we take that out, although the cats stay in place.'

Tuned in this way, the M2 Competition has a healthier power-to-weight ratio than a Mercedes-AMG GT C. So it's searingly fast. This car has the seven-speed DCT transmission. It feels tall-geared, so from behind the wheel with the throttle wide open you get this unsettling sense of the car piling on speed exponentially, of it getting faster and faster and faster with the scenery getting ever more blurry as though you're strapped to a runaway train. It's the sort of rampant acceleration that you have to steel yourself for.

The engine doesn't feel at all moody. It starts boosting hard at 2,500rpm. It pulls all the way through 7,000rpm. In third gear, midway through the rev range, you have to conclude there is no turbo lag whatsoever because when you do stand on the throttle pedal, the car just surges forward instantaneously. In normal driving there are signs the engine isn't in factory tune, though, because when you pull away the transmission seems to hold onto first and second gear a fraction longer and the soundtrack at low speeds is much raspier.

Inevitably you'll spin the rear wheels up through second gear if you're really clumsy, but from there on the car just takes it all. On a dry road, anyway. To give the driven wheels at least some chance, Litchfield's map reduces torque in first gear by around 10 per cent and in second by five per cent, but from third gear onwards you get the full 520lb ft. You'll need the titanium Akrapovic cat-back exhaust system to get the full 540hp, although given that it costs £7,067 you might prefer to go without and make do with 520hp instead.

Before we go any further, a word about warranties. Make any substantial modifications to a new car's powertrain and you'll invalidate the manufacturer's warranty. That's a fact. The sensible advice would be to wait until the cover has expired and only then get to work on the engine. But you can tell by the number of new cars that are delivered to Litchfield's Gloucestershire base directly from the supplying dealership that plenty of owners simply aren't concerned. What's more, Litchfield says he's been uprating the S55 engine for half a decade at a rate of one a day and hasn't had a single failure yet.

Aside from its new engine management software and that Akrapovic exhaust, this particular car also runs Litchfield's suspension upgrade. The AST coilovers are two-way adjustable, so you can adjust bump and rebound through 12 steps. It's as simple as turning a screw, although apparently owners tend not to bother and just stick with the settings recommended by Litchfield, which work beautifully on our roads. Nice to have the option of tautening everything thing up if you're heading out onto a Grand Prix circuit, however. The 30mm ride height drop (also adjustable) gives the car so much more visual attitude, too.

Before the M2 Competition came along the AST suspension was an essential upgrade, but the M Division made such enormous strides with the updated model that you could leave the chassis be. So while I haven't driven a 540hp M2 Competition on stock springs and dampers, I'm certain the factory setup would be up to the task.

The cost of the remap is £720 and the AST suspension package costs £2,845, both with VAT. In conclusion? The M2 Competition isn't necessarily made a better car by the sort of power output that delivered Porsche and the 917 maiden victories at Le Mans, but 540hp does make the BMW more hilarious, as well as a whole heap faster. Importantly, the little coupe isn't at all tripped up by that sort of shove. You might even drive it across the North York Moors in the middle of winter.