After selling his original Atom our Carpooler says "I wanted that buzz, that madness back"...

Since regretting selling the first one... 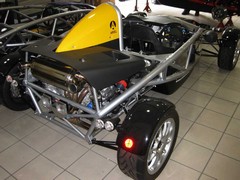 "This car is actually my second Atom. My first I bought in 2007 was an Atom 3 245hp which I'd always planned to supercharge, but I ended up selling it before I got round to doing so to fund a Ferrari dream. Ever since I sold my first Atom I'd pined for another. I missed its wayward antics, its desire as one of my friends put it 'go go sideways in a straight line.' Having driven 2-Elevens, owned a Caterham R400 and Lotus's superb 340R, Elise S1/S2 and Exige they all seemed a bit 'sane' for track days. I wanted that buzz, that madness back."

What I wish I'd known:
"That the factory are the best I have dealt with, bar none. They invited me down to spec the car, which I went through with Tom and Simon at the time, followed by a test drive, and then the chance to go and speak to the mechanics about running one, which options made sense, etc. I will always remember the first time Simon opened the taps on the test drive! Best test drive ever! 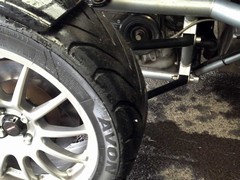 "That my first set of Yokohama A048 rears would be pretty worn after my run-in drive, which was 150 miles! Steve at Ariel looked on in disbelief, followed by 'what have you been upto?' I think it might be new record and I promise I wasn't trying to drive like a c*ck. Apart from that, if you have to stop for fuel or indeed anywhere, prepare for chat, pics, video. etc. Nothing I have owned gets the attention this does. Once you've driven something like the Ariel almost everything else feels slow by comparison, and rarely outside of full-on race cars is anything so intense. It can kill the supercar 'awe' future cars may bring performance wise."

Things I love:
"When I drive this car its 'me' that is getting the most from it. It is SO visceral. SO sideways. In a day and age where more safety systems, flappy paddles, traction control, ABS, etc are prevalent in almost every other car, the Atom says 'you don't need them - learn how to drive properly and man up.' For me on trackdays, it's not about having the fastest time, but having the most fun, and that's where this car excels. It genuinely makes me laugh and smile every time I drive it. Passengers also. The noise it makes - descriptions vary but may favourites are 'like a tie-fighter' from Star Wars, or 'as if squirrels are being fed into the air intake and blended!' Both refer to the lunacy of the supercharger scream which is the dominant noise the car makes, unless of course you have a passenger, who occasionally can drown out everything! Oh, and the brakes - almost more impressive than the acceleration. Opening the garage to see it after a week of seeing normal road cars." 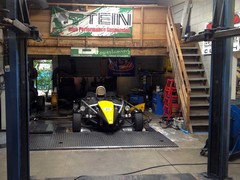 "Actually the car is fine, it's more the Scottish weather and the occasional need to dress up like a Goretex Tellytubby to drive it anywhere! Its touring range at about 150-180 miles isn't the best but then after that sort of distance on the roads in one, you welcome the chance to refuel at the same time as the car. I did get the car remapped at TDI North to improve throttle sensitivity which was a bit like an on/off switch to start with, and they also put in a custom K&N intake. 310hp wasn't enough, so it's now got 325, and it's easier to moderate throttle inputs. Ariel also listen to any issues an owner might have - they had changed so many things I fed back upon in my first car, to this new one some four years later. Also they need to fit the rear number plate with something better than tape. I've lost two now! Oh and to the many askers 'No, I didn't build it myself' - I wouldn't drive it if I had!" 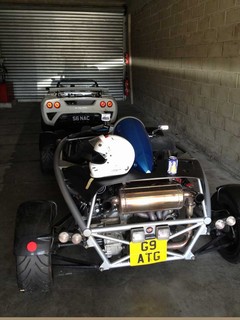 What bodywork there is has changed to blue

"Since I found out about Avon's insanely good ZZR tyres, which I started using instead of Yoko A048s as they were lasting a day on track at best, costs are minimal. It's so light it doesn't use much in way of consumables. Insuring is a bit of a challenge, but the factory is superb and points you in the right direction. Local dealers don't exist for Atoms, so Murray Motors in Edinburgh who have the Lotus franchise have been looking after it for me under the watchful eye of Craig Moncrieff. Superb service, and the factory are always happy to take a call on servicing to help facilitate my some 450 miles from Crewkerne."

Where I've been:
"I drove it from Edinburgh to Le Mans in a day in August, completed a trackday at Le Mans following day, then on to Dijon for another then off for a final one on the Swiss-French border, and then back to Edinburgh. No issues at all. And most definitely fills me with that feeling of 'this is why I work so hard, for moments and fun like this.' Every trip in this car tends to be an adventure, and track days in the rain are just out of this world like Oulton Park recently. The car is constantly fighting you, sliding, locking up, going sideways, it's just full-on driving that very little gets close to, and best of all you are solely responsible for keeping it on the track. The passenger seat is never empty at trackdays, and everyone seems to absolutely love the madness of it. Very good for emptying the outside lane of the Autoroute and obviously it excels at the 'peage Grand Prix.' 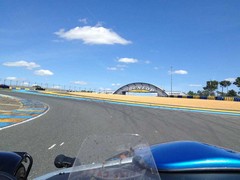 Le Mans among the many tracks visited

"I've had a few trackdays with friends in 2-Elevens which have been awesome fun, and really allow you to look at the differences between the cars. The Lotus is so composed, fantastic round high-speed corners, much more stable and phenomenal brakes, versus the Atom which is lighter, quicker in a straight line and sideways trying to keep up through the bends. Ledenon, Dijon, Park, Anneau du Rhin have been great venues for our battles to date! The 'ring in 2008 with the 245 - didn't know the place, went out and had the best lap ever chasing the M5 Ring Taxi, and showed the chaps in the Murcie, GT3 RS and GT2 that you can overtake round the outside of bends (if you're lucky enough to follow a racing driver who knows where he's going!) Video on Youtube."

What next?
"I've a few other cars and the plan with this one is to keep it. I might get the new Atom 3.5 lights, but really I'm not sure when I last drove it in the dark. I would love to race in the Atom Cup but work and family life (and being at the wrong end of the country for racing) aren't making that look likely. Still waiting for my invitation from the factory to drive the Atom V8! Also planning a trip in June with 25 mates to Hethel's test track, Spa, Zolder and hopefully the 'ring again also, which should be hilarious. I'd better take some brave pills for the quick stuff at Spa - composed in a GT3 or 2-Eleven, I suspect I'll have adrenaline in oversupply in the Atom!"