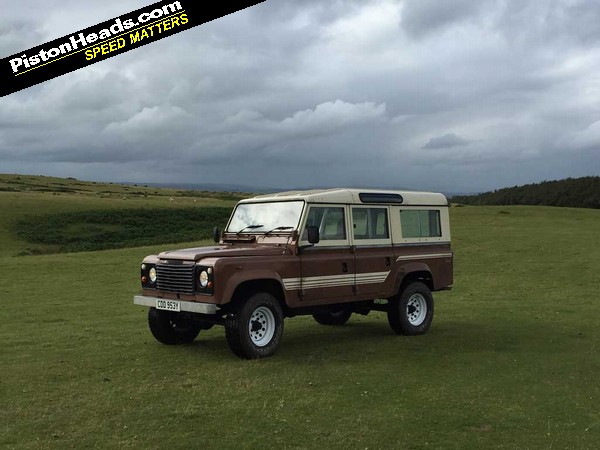 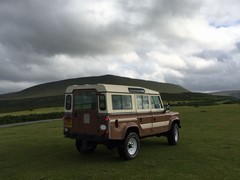 And this was the first weekend...

Why I bought it

"After having a lovely 1998 Jaguar Sovereign as our daily driver for the last two years, a change of both work and lifestyle demanded a large 4x4 with serious boot space. The trusty old Jag just wasn't suitable for towing heavy horseboxes through muddy fields and for loading up heavy equipment.

"Luckily I found a very enthusiastic new owner for our beloved land barge, who's now actually restoring it to its former glory. Wanting another British icon to explore new horizons with, I spent hours and hours reading about the pros, cons and pitfalls of L322 Range Rovers, Discovery 3s and Defenders - all sorts! After reading a few horror stories of the high maintenance costs of the modern cars (new gearbox, anyone?) I choose to go down the Defender route.

"The first hurdle was to find a nice second hand example that was Low Emission Zone compliant - many pre-2001 Defenders within budget have been registered as utility vehicles with the DVLA and therefore are impossible to run in Central London, where I live. The second hurdle was to find a 110, as we often ferry around friends on our trips. The third hurdle was to find a car in good shape - rust does eat the doors and chassis. As I was looking for a daily driver, restoration projects were a no go. 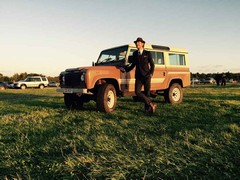 "After spending another couple of days on forums and specialist websites I went out to see a couple of Defenders in different price ranges and conditions, just to get a sense of what's available for the money. End of the day, I found this 1983 One Ten in brown/crème stripe livery at a Land Rover specialist near Coventry. The sale was quickly made and within an hour off we went: a quirky convoy consisting of a thunderous TVR and the big old Landie driving back to London together.

"It's one of the first 110s succeeding the Series III, with a slightly greater focus on 'consumer luxury', whatever that may be in Land Rover terms! This particular vehicle has had its engine replaced with a Defender 200Tdi unit, therefore providing usable horsepower and maintaining high reliability. Furthermore, it has a two-inch lift with big Cooper off-road tyres. Not a necessity for me, but I quite like the look of it and the ride is actually surprisingly comfortable!

"A Defender has always been high on my wish list for its no-nonsense character, timeless styling and the can-do, go-anywhere capabilities;it makes you dream of overland trips across Africa while staring through the office windows at a grey sky. Every time I take the car somewhere for the weekend, it makes the eight-year-old in me feel like a true adventurer. My girlfriend, a fellow petrolhead, also wants to drive it all the time, another testimony how eventful a drive in this Landie really is." 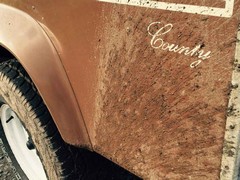 What I wish I'd known

"I initially discarded 'older' Defenders as potential cars to look at and tried to find a relatively modern TD5. After a few months with the One Ten (and driving a friend's TD5) I learned that although the TD5 is a bit more modern, an older Land Rover is just as usable when it's in good condition. They both rattle, hum and leak, but both bring a smile to your face.

"It does however help that my car had its original 2.25 litre diesel replaced by the 200Tdi lump, providing a bit more confidence in modern day traffic as horsepower increased from c. 68bhp to 107bhp. I also wish I'd had known earlier that Defenders in general can be relatively comfortable and usable as daily drivers - I would have bought one earlier!"

Things I love:
"The agricultural diesel sound of the engine calms me down after a busy week, and its slow but steady pace is very relaxing in bustling London traffic. I also love the vintage interior with brown cloth seats and the large, thin rimmed steering wheel. The high seating position combined with the abundance of glass provides an excellent panorama view of your surroundings, which makes any early morning drive through the countryside a remarkable experience. Sliding open the window (no wind-down windows on this car!), poking the right elbow out, and pootling to the livery yard to go and see the horses at the crack of dawn is one of the highlights of my weekend. In a town filled with big shiny SUVs, this 110 seems to be a relatively inoffensive car and many people are very positive about it - kids especially seem to love it. It also has something quite timeless and classless about it, which I really like." 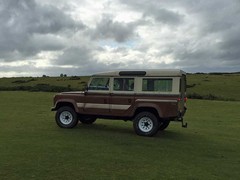 "Nothing to really hate about the car thus far! A few small niggles have popped up but everything was neatly fixed under warranty. Compared to my other vehicles, it seems to be good on fuel and cheap on maintenance costs. I haven't been in any multi-story car parks or on the ferry with it yet - that might be a challenge!"

Costs:
"Many parts are cheap as chips, and the mechanics are straightforward. This was one of the reasons I wanted to move back to a simpler car, fearing the costly specialist work associated with keeping a more modern off-roader running. Also, it's doable (and a lot of fun!) to fiddle with this car yourself, a great excuse to buy two more Haynes manuals and some additional toys for my tool kit. Road tax is c. £260 per year, and I've insured the car with Footman James for c. £130 per annum fully comprehensive and with a 5,000-mile limit (28 years old, parking on-street in Central London). Parking permits are also affordable, as this car is LEZ compliant and the engine size is modest. As for the car - Defenders aren't cheap but hold their value very well, so I don't expect any depreciation over the next few years. No clue about mpg, but it must be way more economical than my petrol V8 cars." 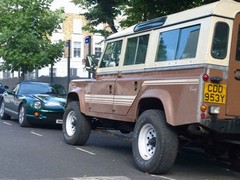 "Within 24 hours of ownership my girlfriend and I went on holidays with it to Wales, a good trial-by-fire in the Black Mountains. The Landie however was perfectly in its element crossing the Breacon Beacons, as you can see in the pictures.

"Furthermore, we've driven it to a few shoots and horse riding events out of town, and we've been to the Goodwood Revival last month. As coincidence had it, the Revival organized an amazing ode to the Defender this year."

What next?
"There's a little list of upgrades I keep with the car, such a fitting a flood light above the back door, installing three-point seatbelts for rear passengers and maybe adding some nicer floor carpet and a few new door seals. I'm currently also exploring a slight tune of the engine - a larger intercooler, a tweaked fuel pump and a straight through midsection of the exhaust should provide a bit more low end torque, which is more than welcome with this two-tonne beast. I'm not looking to sell anytime soon - now having a good towing vehicle makes me look at track day cars again!"