Bemused by the P1: PH Blog

Monkey reckons McLaren's P1 launch strategy is all wrong, and can't fathom why it's happened

There exists no definitive text on automotive product launches, but it's safe to say that any commissioning publisher probably wouldn't ask McLaren to be the author. 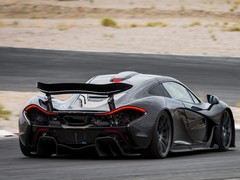 Ron has promised a lot; can the P1 deliver?

For the avoidance of doubt, I'm a massive Woking fan, I love the 12C more than most of my colleagues and I'm fascinated by the P1, but its communications strategy is about as cohesive as the Egyptian political system.

You don't need to trawl the internet for anecdotal evidence either - it always runs to the same theme. Ron makes a statement, the rest of company soils itself, then runs around trying to ensure it somehow becomes the truth.

Actually, scratch that - let's do some trawling.

Here's a typically demur, modest announcement from Ron earlier this year: "I'm a little bit nervous to say it but I can say with all belief this is going to be the fastest car in the world. And that includes what has come before today and what will come after. So we're very, very confident. No one's going to get close to the performance of this vehicle." 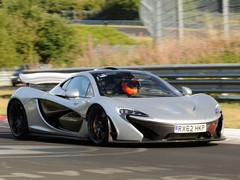 McLaren has been at the 'ring for a while...

You would be forgiven for assuming Nostradamus was Chairman of McLaren Automotive, such are the certainties concerning future hypercars contained here, but either way the whole message seems to have been structured to cause the PR team maximum bowel cramps.

But does the McLaren P1 actually need a communications strategy? I'm not sure it does. Certainly the type of person capable of buying such a car probably doesn't give two figs about what I say about it in a video. He or she will buy it for the looks, the name, the fact that Ron's a buddy - any number of reasons other than a positive review.

Or maybe the claimed Nurburgring lap time would persuade people to have a P1 over a La Ferrari or a 918? (In reality they'll probably have both anyway). 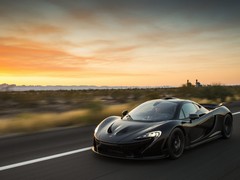 Enough with the nice pics; let us drive it!

So, on the back of Ron telling us the P1 would break all records, run under 7 min at the 'ring and be the fastest car in the world, the test team has been camped in Northern Germany for much of 2013. They have set a lap time, reputed on the internet, which has never been proven wrong about anything,

, a pretty handy achievement in my book.

Looking at the P1's raw numbers, it's hard to see how it couldn't be faster than the 918: lighter, more powerful, crazy aero, it has everything in place. I'd like to sit here and hypothesise as to why McLaren has decided to not ever release the lap time (I've taken that info from Nick Trott's piece in Evo magazine), but I have absolutely no idea why.

I can't think of a single reason not to tell us, unless the P1 genuinely hasn't beaten the Porsche's time, and I have it from several good sources that it has done just that. And for once I struggle to agree with those who say they don't care about 'Ring lap times. I couldn't give a fig if the new M3 does a 7:50, but I'm really enjoying seeing great drivers push ever-closer to Bellof's almost-mythical 6min 12sec benchmark. 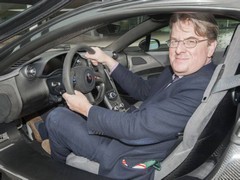 Nope, we've no idea who he is either

And so into the soup of Ron's extreme performance claims and prolonged lapping of a German circuit to seal a lap time that won't be publically aired enters that crucial ingredient, the

Quite who Robert Hardman is, or why the McLaren PR team chose to have him in the P1 are questions I cannot answer, but I'll try all the same. I have to assume that Woking is attempting to move beyond the specialist motoring media myopia - itself a sensible strategy - and the Daily Mail has a simply massive audience. But what value media coverage that distills something as extraordinary as the P1 into the adjective 'nippy'? Not much from where I'm sitting, but then I'm probably too busy being jealous at having come nowhere near a moving P1 to be objective about it.

Was giving the world exclusive first drive to Jay Leno a good idea? I'm not sure. He's a great car guy, I've always enjoyed watching him on the telly and the interweb, but the resulting video footage of him and the car at Dunsfold was both unexciting and inconclusive because it didn't really tell us anything about either the quantities of performance on offer or the way it drives. I think the first time you see a P1 moving, it needs to be so exciting that the image is branded into your frontal lobe. Think Tiff in the F1 and you'll know what I mean. 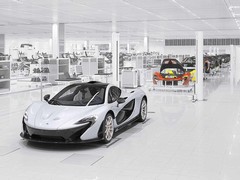 Customers are now receiving their P1s

In fact the one part of launching the P1 to the media that McLaren appears to have done correctly is give the car to Top Gear. With a global audience of eleventy billion and a man called Jeremy who can probably legitimately claim to be the only person who can directly influence sales of cars like the P1 by saying he likes them or not, it seems entirely sensible to give them the car before anyone else.

But what do I know? I'd be the worst PR strategist since Gerald Ratner took it upon himself to opine on the subject of his merchandise quality.

What do you all think?