After three years and three DNFs, Chris wasn't holding out much hope in 2014 - here's the story 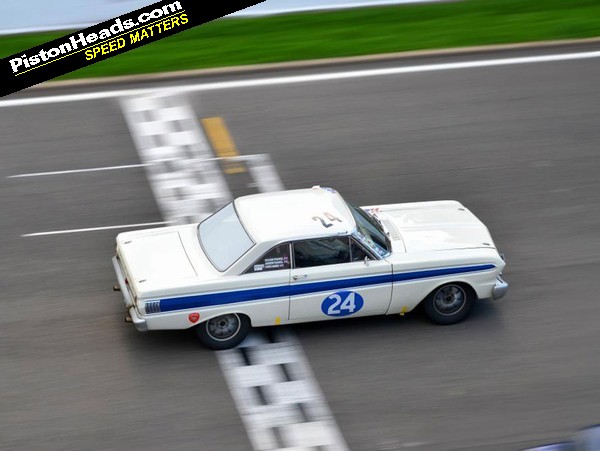 The heaving crowds around garage 42 at Spa occasionally checked their Twitter feeds to feign interest in the F1 qualifying, the WEC in Texas and the GT3 race in Germany, but really all they came to see was the #24 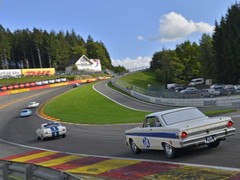 Uphill bits easy in Falcon, stopping it less so

'They' were in fact just one creaky old Belgian spitter attempting to flog me a 100W bulb, and he didn't seem to have a mobile communications device handy, but it's impossible not to feel a bit special at Spa. Like you're at the centre of the motorsport universe even when you're plainly not - because Spa is the greatest modern track of them all.

And the Falcon truly is a special car: homologated back to under 1,200kg, pushing 450hp through its 289ci V8, it is the finest four-hour car ever to enter a six-hour race. In fact if there were a four-hour category in the Spa Six Hours, we might have been the car to beat for the last three years. Sadly the officials have never created, and still see no reason to create, a separate class for teams who would prefer to only complete two-thirds of the total race distance. Therefore Team Frankel-Harris has, since 2011, been categorised most unfairly in the results pages with the nastiest acronym of them all: DNF. 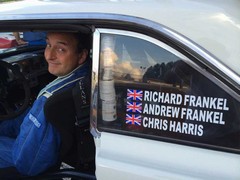 Andrew Frankel all smiles before the off

To recap: the first year it was the chassis - just a minor hiccup as a front wheel detached itself into Les Combes in the middle of an Andrew Frankel stint. Of course we all tried to blame him for kerb abuse, but the onboard footage sadly didn't support the accusation. Not that we didn't call him Robin for a few months after the event.

After an extensive 12-month development program during which we identified 400hp being far more than either the chassis or the brakes could handle, we returned in 2012 with a new upgrade package, as devised by a crack team of experts. This included a 450hp engine, no changes to either the brakes or the suspension, some beefier hubs and back-to-back dinner bookings at the local Fondue house. Belgian fondue rocks. Three cheese; two beef.

This engine was quite something. It would rev to 6,400rpm with spiteful zip and, if the driver was feeling idiotic enough through Eau Rouge, would allow this super-heated paving slab to out-drag some of the semi-lightweight E-Types up the Kemmel Straight. At which point they would brake neatly for Les Combes and the Falcon driver would find religion. 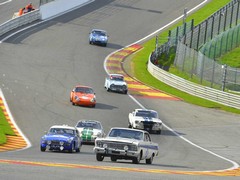 A monster of a car, monstering the field

As if to acknowledge the deep pain it was causing its fellow components, the engine did the decent thing and released them from purgatory by committing hari-kari itself, at the end of the third hour. We humans retreated for extra fondue. Three cheese; three beef.

Days later the car wasn't delivered to Woking for its 2013 upgrades work. Driver feedback suggested power be returned to the 400hp mark and the braking system from an A380 be fitted, so we went for the same power and some slightly less fragile rockers and vowed to 'use the brakes less'. But the crowds were once again left desolate as the forlorn Falcon failed to scream into the race's fifth hour due to a melted clutch. And we'd only been using 6,200rpm this time. More fondue followed.

As the contracted third driver, this triple failure to enter the final phase of the race left me in the curious position of never having completed a full race lap in the Spa Six Hours and, after the race, wearing the face of a beleaguered, beaten Scottish politician I offered my resignation from team Harris/Frankel on grounds of bringing to it the luck of a Voodoo doll in the shape of a black cat. Perched under a ladder. 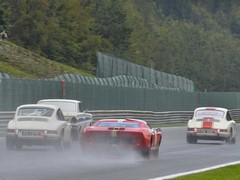 Uh-oh, there's a braking zone at the end of this...

This resignation was considered over the winter recess and, when Emerson Fittipaldi became unavailable at the last minute, was rejected by the Frankels. And that's how we found ourselves at Silverstone three weeks ago, shaking down the big Ford after its winter wind-tunnel sessions - used primarily to judge how much chrome falls off at 145mph, one doesn't want to be disqualified for being underweight; if indeed one actually finishes.

We made some set-up changes, muttered with surprise that the middle pedal appeared to actually do something and were about to pack up when the motor dropped to seven and we found another broken rocker.

This time I had been driving, neatly spreading the balance of blame these past four years across all three pilots. But, joy of joys, there was no further damage found and after fitting a set of rockers clearly made from NASA-spec alloy, we headed to the land of warring Walloons and Flems for our fourth attempt at Belgium's premier endurance race for old snotters. 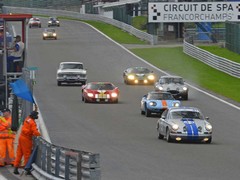 Diversity of the field helps liven things up

The plan was simple. Drive the car as little and as gently as possible until the start of the race. Accordingly, the rev limit was dropped to 6,000rpm and we each ran one flying lap in the test, then three flying laps in qualifying. Goals for the weekend were set high and translated into a complicated algorithm running though race data software to manage our performance. Yep, my MacBook had a post-it slapped on the screen which read 'Just Fecking finish. Please'.

We qualified an impressive 68th from 107 starters on a 3min 9sec lap. If this was a handicap event with reverse grids it would have compared very well with the 3min 4sec we clocked in 2012.

Our specialist starter A. Frankel took the first stint and was immediately impressive, jumping many stragglers on the opening laps and navigating both safety cars and a classic, surprise Ardennes thunderstorm to drag us up to 39th after 90 minutes. At this point another safety car period began because drivers had been accurately responding to messages from their pit boards to 'Drive like complete knobheads and do everything they can to injure themselves and damage their cars'. Really, it wasn't a great advert for well-heeled types driving nice cars in the rain. Many of them should just have parked up and had a cuppa. 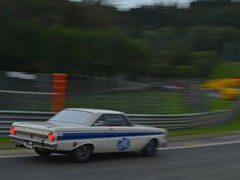 At least the brake *lights* worked...

No matter: in a brilliant move we actioned a quick pit-stop, swapping Frankels and sending the intrepid Falcon on its way. Ross Brawn would have been staggered by the tactical cunning on display as we emerged in 85th place, at the back of the safety car pack.

Richard then used the changeable conditions to his advantage and launched our second strike on the leaderboard - the places tumbled like the intermediary rounds of the final fight in Rocky IV - into the 70s, then the 60s, then the 50s and up into the mid-40s before he pulled triumphantly into the pits to ensure the fondue restaurant was going to stay open late enough. This left two and a half hours to run, potentially possible with a safety car and me with a point to prove.

The fuel stop was slick - well, as slick as a fuel stop can be when you sit and wait on what looks like a normal petrol forecourt, then fill the bloody car yourself, faff with the belts and generally make a balls-up of the whole thing. 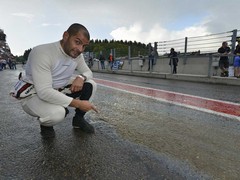 The oil tanker seems to have left a slick...

I have no idea what position we rejoined in, but I popped out behind another Brit-run Falcon that had dusted us in qualifying and set about chasing and passing him. That took a lap and a half and then, braking into Rivage a corner later, the already long brake pedal suddenly sank another two inches, my Nomex underwear changed colour and the car struggled to stop. The next left was a problem too and into Pouhon it was clear that the brakes were not coming back - furthermore, there was smoke billowing out of the rear of the car, so I dawdled it back to the pits and parked up. Quelle fromage.

You really couldn't make it up. But, on the positive side, I had at least completed one lap in the race! The mental Belgians who always have a garage next to us dived in to help Team Manager Vernon - but only after we'd extinguished the small fire pulsing from the right rear brake line. The shoe had worn through and then caused general mayhem. To add assistance another, even bigger thunderstorm dumped inches of water on the track, so the car was wheeled into the garage and we ended up simply blocking off the right rear drum and went back out, after 40 minutes, with just the three brakes. To be honest, the car doesn't really feel like it has much in the way of brakes at the best of times, plus the track was now wet, so this wasn't much of a problem. 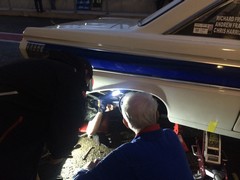 The lights, however, were. The tri-xenon, gadzillion watt laser spots we'd spent time developing over the winter were sadly a figment of my imagination. Instead I had a pair of damp candles hidden behind misty, murky, half-century-old glass. I never thought I'd be thankful for a huge electrical storm, but lightening really does help spot the turn-in point for Blanchimont.

These were slightly silly conditions, but the Falcon was hilariously sideways and I had a truly memorable 90 minutes trying to distract other drivers with silly angles in most of the corners. With 15 minutes to run the rain was so heavy intense that the track began to flood again, and the race was red-flagged. 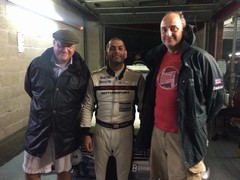 And this meant we had finished the Spa Six Hours. Yipee! A four-year odyssey had finally lead to the ultimate goal - classification in the finishing order. If you'd offered me the chance to nearly spanner myself in zero visibility around Spa, in a 50 year-old saloon car, and added that 75th overall would be the final prize, I might not have leaped at the opportunity. But that last stint was huge fun, and as you can probably guess, the Spa race weekend with the Frankels is about as much fun as a race weekend can be - with added fondue.