is, the next it's slewing about Estoril like we're on a track day for people with an endless tyre budget with some yelping berk procrastinating on matters of rear-driven excellence. 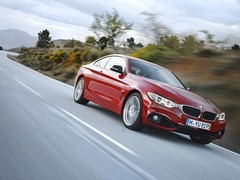 As I write this on the plane flying home I'm wondering what it all means. I think it might be quite complicated. Then again it could be very simple.

The 4 Series is a 3 Series coupe. I was too busy being hormonal to ask why BMW saw fit to change the name after 30 years of calling it that, but have to assume it is bound up in words such as 'niche', 'identity' and 'those gits at Audi'. Call it BMW's Oil of Ulay moment. Despite encroachment from Audi, Mercedes and the rest, the 3 Series Coupe (it's going to take me time to get used to this '4' thing) has always been the benchmark prestige, usable two-door coupe. With that status comes a set of expectations which can cause havoc for people like me.

'Those gits at Audi'
I have always seen this car as the sensible choice; albeit one which carries with it the credibility of rear-wheel drive and exceptional dynamics. The image has always been a problem, the way it drives never has been. So why does it comes as a surprise to spend the first hour in a new 435i (it doesn't even look right when you type it, does it?) and wonder how on earth a company like BMW can fashion something so bloody dull from ingredients such as 306hp, rear-wheel drive and stiffer bodyshell than a 3 Series. Saloon. Here's the full press pack. 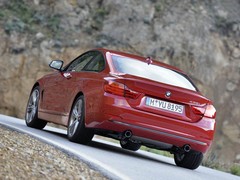 Lower and a bit meaner than the saloon

But wasn't it ever thus? I remember reading about the E36 325i coupe in 1993. Articles littered with adjectives dancing around notions of respect and admiration. Just buy the Corrado if you want to have fun.

BMW doesn't want this thing to tear around too much, that's going to be the job of the M4 (try and tell me that doesn't look profoundly wrong), leaving the 435i a potentially minute seller in Europe. So why didn't I test the 428i or the 420d? Because that wouldn't do massive slides at Estoril of course.

That bloody 1 Series
Some observations about the 435i Sport on the road. With the optional adaptive dampers in Comfort, the ride is good to promising. In Sport it's quite harsh. The motor has a real zing to it, but as someone who spent a week in an M135i very recently this car feels a little flat afterwards. BMW decided to reduce the power and torque for the base car (there's some aftermarket bits to discuss soon) leaving a machine that is both heavier and less lusty than its baby upstart. The 435i enjoys the same glorious smoothness from the blown straight-six and the optional ZF eight-speed, and the noise is decidedly expensive, but it never quite manages to feel quick enough to make you grin at the silliness of it all. Whereas the last 335i had more than a whiff of Q about it, this one somehow doesn't. Blame that entirely on the aforementioned 1 Series. 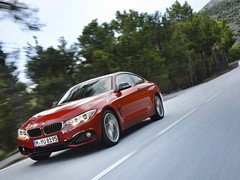 Playing it a bit safe though? Discuss...

The dynamics, curiously enough, are 3 Series plus six per cent. Everything is a little better supported, more accurate and firmer. The car sits 10mm lower, and the seat is actually 9mm lower, so the overall effect is one of being in something quite a bit more serious than the 3 Series. BMW claims that the 4 Series has the lowest centre of gravity within its model range.

The cabin is a mixture of the utterly predictable and the slightly worrying. First up is the now customary electric presentation arm which protrudes forwards to hand you the seat belt. It's a disaster. Sometimes it lunges and misses like a drunken man, other times you grab it and the belt rolls-over itself within the buckle . You know the one: you give it a yank to free it and the b*stard gets wedged.

'No drifting'
The rest is pure, generic BMW. Utterly familiar, superbly executed and now free from Bangle's influence. The iDrive dial has a touch pad on it for scrolling around the nav and other widgets. I suspect it takes a more delicate touch than mine. 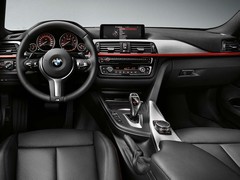 Rear leg room is fine, but limited if your driver is a fast bowler. The boot is a good size and the luggage net can be dragged over several large bags. I know: the details we discover for the PH massive.

Yep, you drive along in the 435i (wrong, wrong - still wrong) suffused with admiration for the inner workings of BMW. This is as painless as 40-something-thousand pound motoring can ... hang-on, £40K shouldn't be painless. It should be life-affirming! So I trundled into Estoril Circuit wondering if BMW's finely judged sense of the ordinary being quietly underpinned by conspicuous talent had been disturbed. Did ordinary actually mean boring?

Yeah right
Those lingering doubts were nourished by the man giving the briefing ending it with a request of 'no drifting'. What's the world coming to? It's a ****ing 300hp BMW. If it doesn't oversteer it might as well be a ****ing Audi. Besides, telling a man not to oversteer is like telling a teenage boy not to leer at women's breasts. 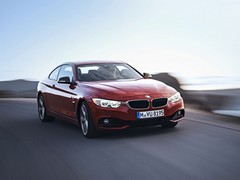 Hides its true talents on the road

It shouldn't have, but the 435i rather came alive on the circuit. Not because it has any great track pretensions - in circuit terms it's too loose, ungrippy and lacking brakes to lap for long - but because it finally had a chance to show itself. Know that mate who, once every 10 years cuts loose on the dry sherry and delivers a virtuoso performance of drunkenness? That's the 435i. You have to delve deep, and you'll need to be on a circuit, which is of course completely irrelevant to the way the car will be used, but there you will find the heart of a real BMW. How did Sir Humphry describe Radio 3? No one listens to it, but we just need to know it's there.

'A bit Rich Tea'
Perhaps this is why BMW will sell you bits from its M Performance accessories to harden your 435i (not getting any easier). First on the list is the M Performance Power Kit. It gives another 34hp and 37lb ft. M135i owners beware. You can have a limited-slip differential, larger front brakes, and a set of front and rear bumpers glistening with carbon. I'm trying to get some prices for this lot, but throw everything at the 435i (nope) and you end up with something quite different to the standard car. I suspect - because I've yet to drive one. But the presence on the launch event of a white display car, festooned with all this kit and a ruddy great black stripe does suggest that BMW knows the standard offering is a bit Rich Tea. 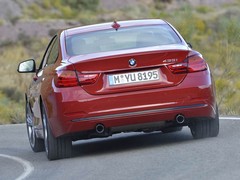 Can still steer from the rear though...

I have huge admiration for this car. It would be a fine companion over a several years and I think BMW has been very astute in offering some aftermarket trinkets for those who want added dynamism. Best of all, as a 420d (it's still not happening for me) many people will enjoy a level of chassis sophistication that separates the ordinary from the excellent.