Harris brings our Geneva coverage to its conclusion, having nearly been decked by Rolls-Royce security 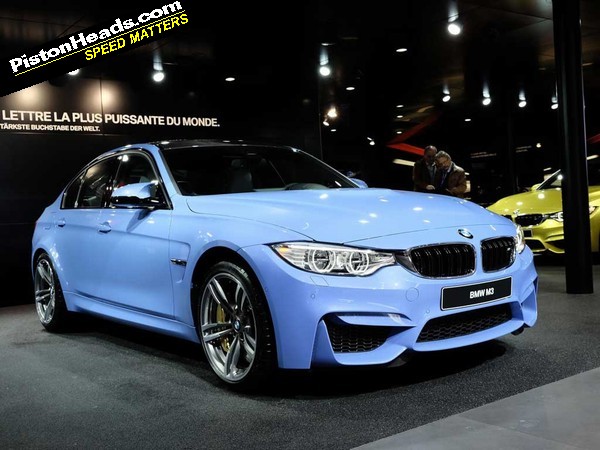 Thank the Lord BMW chose not to

at Geneva. Its stand was, to these eyes, the most impressive of all because of the sheer breadth of material on offer. Front-drive mini MPVs to carbon-tubbed hybrids, to vast pluto-saloons with lashings of M-car for rock-apes like me to drool over. The more I see of the M3 saloon, the more I want to have one. 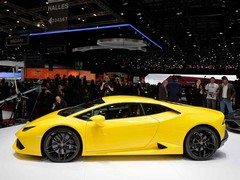 A motor show stand is very much a static metaphor for the mental health of a car company. Five years ago BMW apologetically hid its performance backbone, now it flaunts it alongside the cleverest small car on sale, the i3. Shifting subject for a moment – can anyone understand how it, and the Tesla Model S, were beaten by the Peugeot 308 to the COTY prize? Me neither. We really shouldn’t be surprised by COTY awards, but somehow this years’ was even more transparently shoddy than most.

But on to better things: like the Lamborghini Huracan. Lately there has been spate of fast cars whose shapes were lavished with styling but with no thought for proportion. The new Lambo reverses the trend. It’s a startlingly clean shape, and rarely do four wheels sit so snugly within their recesses. Okay, the nose is a little snubby in the flesh, but overall this is the definition of a car that will sell on looks alone.  I mean, does it really matter that the car is 1.5 seconds slower to 125mph than the McLaren 650S? 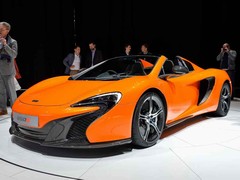 McLaren has reacted decisively to the challenge

The McLaren’s styling is everything the Lambo’s is not – a little fussy and quite obviously a response to those who thought the 12C was too bland. I’ve always had a soft-spot for the 12C’s is-it-a-Lotus looks, and think I prefer it to this new model. Once spec variations have been equalised, the 650S is actually cheaper, so we can probably assume the 12C’s

If I’m cold-ish on the looks, the 650S’s dynamics could be very exciting. The P1 lays down McLaren’s driving DNA, and it’s a much more interactive, playful script than the one delivered by the 12C. If this new car, and the models that follow it, work from that genetic material, Ferrari will need to respond, because it really is that good.

But will people just buy a Huracan instead because it looks so damn good? 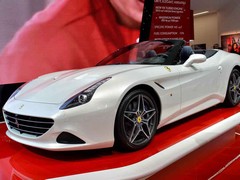 A few light tweaks and suddenly the Cali shines

There were other expensive choices on display too. Rumour has it that Ferrari detuned the new turbo-California from over 600hp because it was just too fast. On the styling theme – isn’t it strange how just a few small tweaks can turn a munter into something graceful. I like the new Ferrari F-Type, I mean California.

It wasn’t as pretty as a the Maserati Concept, and whoever thought fitting the letters ‘Alf’ into its name must be oblivious to Italian motoring history and Fiat in-brand squabbles. Or very much aware of it, and in possession of an excellent sense of humour. Either way, if they made it, and it drove just half-decently and sounded right, the thing would sell. Oh, and they put some proper headlights on the Alfa 4C!

The small car prize went to the Renault Twingo. Rear-engined and rear-drive just as BMW turned to the dark side. Of course the only problem with Renault banking on small cars to revive its fortunes is that small cars don’t sell for much and margins are tight. But you can’t fault it for surprising us. 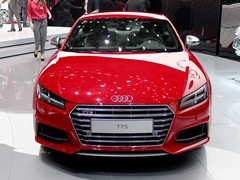 Well, what else was Audi supposed to do?

The new Audi TT was much criticized for looking like the last TT, but when you accidentally create the most iconic sports car shape of the past 20 years, you don’t chuck it away, do you? The new interior is fab, the proportions are right and for those in the market for this type of car it could be perfect. The

Merecdes was light on all-new product, just the new S-Class coupe which cleverly hides its imposing dimensions. Instead it rolled-out an integrated mobility package called Mercedes Me – an online portal that does everything you could possibly need in terms of personal transportation from buying a new car to renting; even ordering a taxi. On the surface, not as interesting as a Lamborghini, but when you try and visualise how we will buy and use cars in the next ten years, it could be an inspired move. 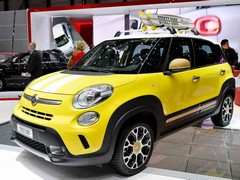 The Fiat stand had the best gratuitously pretty girls and the worst cars. That 500L seems to get worse the more you stare its gopping face. There’s talk of them dropping Lancia too, probably no bad thing.

And so the German domination of this industry continues. Rage against it if you must, but they’re making the most desirable cars right now. And thank you to the chaps from Rolls-Royce for rescuing me from the security guard near your stand. I thought she was going to deck me.

A video follows next Wednesday.