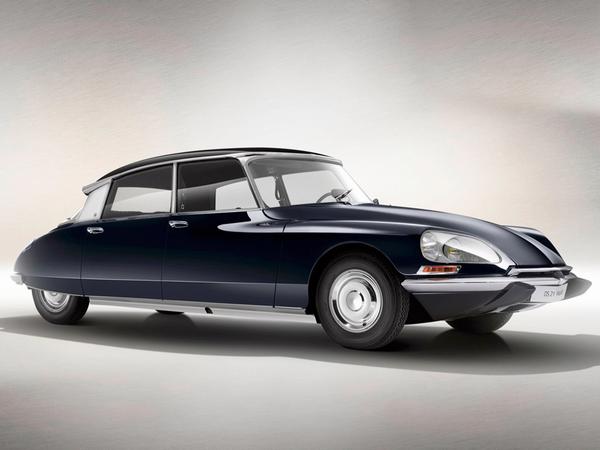 Back in 1955, Citroen unveiled its now-legendary DS 19. The car, which was revealed to the assembled crowd on 5 October, made such an impression that some 1000 people placed deposits that very same day. After 10 days, Citroen had amassed a whopping 80,000 deposits for its sleek new car.

It wasn't hard to see why the DS drew so much attention, given its beautiful styling and innovative technology - with highlights including self-levelling 'oléopneumatique' suspension, a fibreglass roof, inboard front disc brakes and easily removed exterior panels.

The innovations kept coming once the car had been launched, too. More affordable ID 19 and five-speed variants aside, the DS also moved from having two headlights to four in September 1967 - a change made as part of the 'Series 3' redesign. There was more to this than just increasing the number of lights to boost visibility, mind - as this new quad-lamp assembly featured a neat trick that would become inexorably associated with Citroen: directional headlights.

The system, designed by Citroen engineer Edmond Henry-Biabaud, was conceived to counter the limitations of lighting assemblies of the time - and would grant the driver of the DS a better view of what was around the next corner. 'When a road vehicle is travelling at low speed, using the regulation cruising lights the illumination is sufficiently spread to give proper visibility,' wrote Henry-Biabaud in his patent of 1965.

'When, on the other hand, it is travelling with headlamps on, whether these be the normal low beam lamps or the high beam lights - which give good lighting when the vehicle is proceeding in a straight line at high speed - the beams are far more sharply focussed, so as to carry far enough ahead but then prove inadequate on bends.'

His proposed and later employed system connected the steering gear to the second pair of pivoted headlamps by a series of cables and levers. They didn't just sweep left or right by a fixed amount, either; the lamp on the inside of the bend would pivot through a larger angle, providing better illumination for that area of the corner, and the initial speed of the lights' turn would be quicker than that delivered by the steering action alone.

This, according to Henry-Biabaud, would deliver headlamps that 'adequately light the roadway even when the vehicle rounds a curve'. When the feature arrived on the production car in 1967, the difference was marked - and visibility around the upcoming corner was far superior to that of the standard fixed-light car. Citroen's high-tech option naturally made its way into the flagship high-performance 1970 SM, too, solidifying the system's place in the history books.

While Citroen was certainly the first company to deploy such an innovative feature in a mass-produced car, it was not the first to use it outright. The forward-thinking Tucker 48, for example, was available with a steerable 'Cyclops Eye' in the middle of its nose. Unsurprisingly, the reasons mooted in the system's 1947 patent are the same as that of the subsequent Citroen one.

'At the present time it is standard practice in the automotive industry to provide an automobile with a pair of headlights, each of which casts a beam of light forwardly of the car so as to illuminate the road surface immediately in front of the car,' wrote Tucker engineer and vice president Lee Treese.

'Such illumination is adequate for ordinary straight driving, but occasions will arise when the driver must make a turn, and on such occasions he is often handicapped by insufficient illumination in the direction in which the turn is being made.'

It's worth noting that the Tucker system was initially based on having three bulbs in one housing. As the wheel was turned, the relevant bulb would be energised to 'point' in the desired direction. In the production car, the centre light was instead mechanically connected to the front steering - although Preston Tucker himself originally envisioned bother outer headlights turning and the centre remaining fixed.

Alas, only 51 of the fabulous Tucker 48s would be built by the end of 1948 before pressure on the company from other manufacturers and the media forced its closure. Even Tucker - which was years ahead of the curve in many respects - might have been beaten to the punch by another manufacturer; some references cite the fantastic V8-engined Tatra T77a of 1935 as having a centrally positioned light with an electromagnetic assembly that shifted the position of the reflector to 'steer' the light.

However, judging by the original manuals and Bosch brochures from the era, it appears this electromagnetically controlled light would effectively just dip - either down, in some configurations, to function as a fog light, or towards the kerb to illuminate hazards while driving in city centres.

The concept of directional lights, that said, existed long before any of these applications. The earliest patent for such a system appears to be that submitted by William Meeker, of the Automatic Lamp Control Company, in April 1913.

'My invention relates to vehicle lamps and particularly to dirigible lamps in which the direction of the shaft of light of the lamp may be varied with each deviation of the vehicle from a straight path,' stated Meeker. 'The invention is applicable to vehicles of any type such as horse-drawn wagons or carriages, traction cars, locomotives, boats, vessels or bicycles, but is particularly adapted for use upon automobiles.'

Others soon followed suit and, during the 1920s, companies such as 'Pilot-Ray' began offering steerable headlights as aftermarket upgrades. Meeker's patent would later be referenced by Tucker, while many of the subsequent American designs would also be mentioned in Citroen's own patent applications - including inventor Melvin Harley's concept of 'headlights which are adapted for turning' from 1920.

Nowadays, 'adaptive' front lights are a relatively common option - and the technology has filtered down to more mainstream models; for example, the Volkswagen Golf can often be specified electrically positioned 'dynamic cornering' lights.

Many also emulate the benefit of complex directional assemblies by fitting 'static' cornering lights. These are typically a standalone bulb and reflector assembly, switched on by the steering wheel turning or the triggering of an indicator, which illuminate the inside of a corner - providing you with a clear view of what lies ahead.