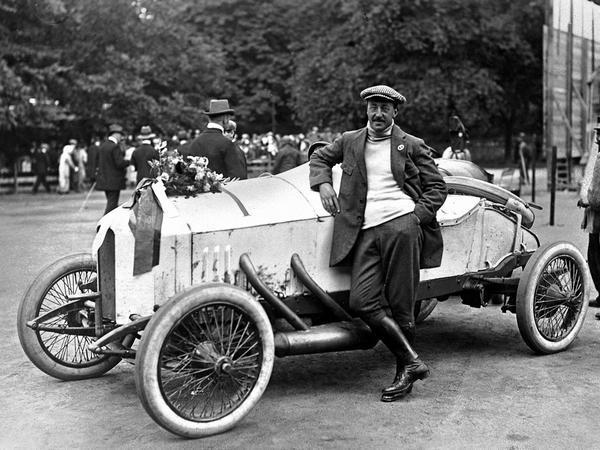 American publisher Charles Knight was not at all impressed with his new 1901 Knox ‘gasoline runabout’. Like some other cars of the era, its four-stroke engine relied on a single valve to permit both fresh mixture into the cylinder and exhaust gas to depart.

Despite sounding somewhat oddball, this had the distinct advantage of keeping the valve cool. Producing valves that could reliably withstand the high temperatures of exhaust gas, back then, was costly and difficult. Consequently, if a single valve was used, it would be cooled by the incoming charge during the intake stroke and its temperature would not become excessive.

This was even more critical in air-cooled applications, such as the Knox, the single-cylinder engine of which put out four horsepower. There were, however, issues. For starters, as was the case with other poppet valve configurations, the valve gear was often terrifically noisy.

It would typically require considerable adjustment and maintenance, too, and carbon build-up on the valves - a result of poor fuels, bad combustion chamber design, and inaccurate ignition and fuelling systems - caused further problems; it wasn’t uncommon to have to pull the cylinder head and decarbonise the valves, to stop them sticking or not seating properly, every several thousand miles.

Many also found that there were limits to what was capable with poppet valves. Controlling them precisely was difficult, as there was no positive control over how they closed, and in many engines the restrictive bore sizes entailed using small valves. Using small valves meant restricting flow which, in turn, limited the amount of power that could be generated.

It was the maniacal clattering of the Knox’s valvetrain that irked Knight the most, though. Fortunately, he had some mechanical nous on which to draw; while Knight had no qualifications in engineering, he ran a publishing company and was familiar with the heavy machinery required to permit the printing of his magazines. He also had more than a passing interest in engines and modern technology, as evidenced by his early adoption of the motor car.

Knight subsequently began experimenting with ways to supersede the poppet valve and, in April 1904, filed a patent for a new type of internal combustion engine. Instead of using poppet valves, Knight’s design was based on making the bore of the cylinder itself reciprocate. The head would be fixed in place, atop an outer cylinder wall that contained intake and exhaust ports.

Within, an ‘inner reciprocating element’ - also featuring ports - would travel up and down around the also-reciprocating piston. As this ‘telescoped part’ moved, in a precisely controlled sequence, it would expose or block the required ports to permit the combustion process to continue.

Knight’s design, with the sliding ‘valve’ mechanism and its eccentric drive sealed within the engine, was consequently far quieter than the poppet alternative. There were several other distinct advantages, too; ports were easily placed and could be made larger without issue, the cylinder head design was not restricted by the valves and the plug could be positioned at the ideal spot within the chamber.

A more advanced design followed, in the patent documentation for which Knight first referred to these ‘telescoped parts’ as ‘sleeves’. This subsequent set-up featured a pair of eccentric-driven sleeves within the block, unlike the earlier single-sleeve motor, permitting far greater control of the intake and exhaust ports. It also featured a hemispherical combustion chamber, in a further effort to improve on previous engines.

Several prototypes were built and, in February 1906, the ‘Silent Knight’ touring car was unveiled at the Chicago Auto Show. It packed a four-cylinder sleeve-valve engine, displacing 5.7 litres, which produced 35-40hp. Those present were impressed by its capabilities, including its positive port control, quiet operation, smooth nature and straightforward intake and exhaust tracts. The engines also transpired to be remarkably free of carbon deposits, after extensive testing, granting them improved output and reliability over longer periods.

However, the sleeve-valve engine was not without its drawbacks. Primarily, although it required little maintenance or adjustment - due to its fewer moving parts and drive mechanism - producing the sleeves required precise machining. The engines also tended to burn a lot of oil and smoked heavily as a result.

Many manufacturers expressed an interest, despite the problems, and began trialling prototypes. Considerable development ensued and, although oil consumption was still often an issue, several companies adopted the Knight design. Daimler, for example, tested six engines in June 1909 and was so impressed that it bought a licence to produce Knight engines for ten years. The first, the 4.0-litre 16/40hp Mercedes, arrived in 1910.

Daimler also noted that, compared to its conventional engines, the Knight powerplants produced more power in the 500-1,500rpm range - making them more relaxed and easier to operate. This complicated engine wasn’t built on a small scale, either; over 5,500 of the four-litre engines alone were built over a fourteen-year run.

Like others, however, Daimler was still battling many of the design’s inherent issues. Lubrication remained problematic for the twin-sleeve motors, in part due to the erratic qualities of oils available at the time. If the oil was not good enough, or wasn’t checked on a regular basis, the sleeves could catastrophically seize.

The were also performance limitations. Above 1,600rpm, the sleeve valve began to be outperformed by its raucous poppet valve alternative; as customer demand for faster and more powerful vehicles rose, many became concerned about the long-term viability of the concept.

The capability of a poppet valve to better perform at higher engine speeds, in conjunction with its ease of production, led to interest in sleeve valves waning.  As more resources were directed at poppet valves, their efficiency and reliability began to increase at a rapid rate.

Consequently, by 1940, the use of sleeve valves in automotive engines had come to a gradual, silent stop - but, by that point, the design had been used extensively by high-flying brands such as Panhard et Levassor, Voisin, Peugeot and Willys-Overland Motors. Knight’s concept, although not devoid of flaws, had unquestionably proven a remarkable and successful one.

That said, the writing for sleeve valves was not entirely on the wall. A pair of engineers, named Peter Burt and James McCollum, had developed a single-sleeve system that rotated slightly while it reciprocated. This capable design, patented in 1909, was easier to produce and consumed less oil.

The Burt-McCollum type of sleeve valve would be adopted in a range of applications, from single-cylinder generators through to multi-cylinder aero engines - the development of which was spurred on by esteemed engineer Harry Ricardo, who was also responsible for advancing the design of poppet valves. Ricardo had clocked several advantages to sleeve valves, such as the durability of the sleeves when lubricated properly and the potential for superb combustion chamber design, which made them appealing for aviation use.

A terrific swansong for the technology would later arrive in the form of the ferociously powerful Bristol Centaurus and Napier Sabre engines of 1938, the latter of which packed 24 sleeve-valved cylinders into an ‘H’ configuration. Flight magazine, later reporting on Napier’s engines in 1958, stated that a high-performance version of the 36.7-litre Sabre had produced almost 4,000hp during trials.

There was the potential for more power, too; Rolls-Royce had been developing a new 90-degree V12, dubbed the Crecy, which used the two-stroke cycle. The plan was to produce a supercharged 26.1-litre engine, which, if the single-cylinder prototype’s output scaled up, would have been capable of producing a staggering 5,000hp.

Alas, further improvements in the materials and design of poppet valves - such as sodium-filled exhaust valve stems for cooling - made the elegant yet finickity sleeve valves further redundant. That, coupled with the advent of the jet age, resulted in the development of these mad-but-marvelous piston engines and their sleeve-valve systems drawing to a close.

In any case, Knight lived to see much of his earlier concept’s success - as it wasn’t until 1940 that he died, at the age of 72. His legacy lives on, too; many enthusiasts continue to maintain and restore the now-prized Knight sleeve-valve engines and, even today, some niche applications remain.