How a talented engineer, spurned by Ford, led the way - and lit the way behind - with cars that were decades ahead of their rivals 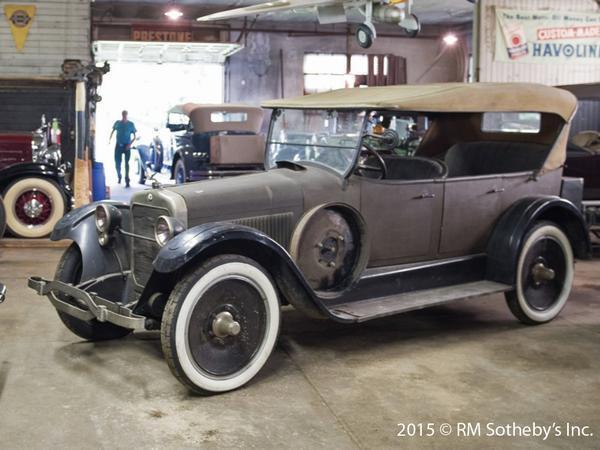 Childe Wills may not be a name you recognise but, if you've ever cast your eyes over a Ford, you'll have certainly seen some of his work - as he was reportedly responsible for the initial script that would later form a key part of the fabled 'Blue Oval' logo.

Wills, however, was behind far more than just Ford's logo. The American engineer, born in Indiana in 1878, was introduced to Henry Ford in 1899 and, by 1902, was working alongside him full-time. Wills was a talented draughtsman and worked tirelessly to convert Ford's ideas into production-ready designs; in 1903, he was employed as chief designer in the newly established Ford Motor Company.

There, he collaborated with Hungarian engineers József Galamb and Eugene Farkas - among other talented staff - to perfect the design for the groundbreaking Model T of 1908. Besides creating accurate engineering drawings to allow the mass production of cars such as the Model T, Wills was also one of the driving forces behind the company adopting vanadium steel alloy.

This lightweight, durable and corrosion-resistant alloy would be used extensively by the company and, eventually, over half the metal in a Model T would contain vanadium. This high-strength material, used in parts such as the front axle and crankshaft, is one of the reasons the early Fords proved so tough and long-lasting.

Wills also aided in the design of key assemblies such as the transmission, the transverse leaf spring set-up and the removable cylinder head of the Model T's 2.9-litre engine - which made servicing and repairs far easier. He's even credited with helping in the configuration and construction of Ford's fabled production lines, which were crucial to the company's success and profitability.

In every instance, Wills strove for perfection and looked to deploy the most innovative technologies and materials. This, unfortunately, played a part in his downfall at Ford. There was no question that the Model T was a capable and successful car; in 1909 a total of 10,666 rolled off the line - and, ten years later, that figure had exploded to 498,432. Its technology and design had long been outstripped by that point, though, and Wills was desperate to see the car updated.

Ford didn't see the point, given the sales success and ease of production, and only allowed minor updates - which frustrated Wills. The degradation of the relationship between Henry Ford and Wills, brought about by the constant demands for changes and improvements, further exacerbated the issue. Wills, not wanting to waste his talents, subsequently made the decision to leave Ford in 1919 and establish his own motor company.

He wasn't devoid of the funds to do so, either; Ford paid Wills a severance of $1.5 million and he had also accumulated $4 million of his own - the result of patent royalties and clever investment in the companies supplying metals to the burgeoning motor industry. Today, those funds would be worth around $21 million and $56 million respectively.

Wills promptly established the Wills Sainte Claire company in Michigan in 1920, with the aim being to produce innovative and high-end luxury cars. If anything, Wills certainly delivered on that front - as the Will Sainte Claire 'A-68', production of which started in January 1921, was packed full of remarkable features.

For starters, the car was available with a 4.4-litre overhead cam V8 engine that drew inspiration from the advanced aero engines of the era - which was no surprise, given that Wills had been involved in production of the 27-litre Liberty L-12 at Ford's plant during World War I. This 60-degree 4.4-litre V8 was of a monobloc design, which in this instance meant the head and cylinders were cast as one. This eliminated the chance of head gasket issues, and improved reliability, at the cost of access.

It also featured shaft-driven cams, a pressurised oiling system, a cross-flow intake and exhaust layout and an automatic clutched cooling fan. Even minor components, such as the valves, were engineered to the nth degree. The exhaust valve, for example, was fabricated from three different types of steel. The stem was nickel, which was resistant to expansion, while the head of the valve itself was made of tough chrome-cobalt steel. The seat of the valve, which had to endure the highest temperatures, was fabricated from a heat-resistant tungsten alloy.

The net result of such an innovative powerplant was 65hp at 2,700rpm, which granted the A-68 a top speed reportedly in excess of 70mph - obliterating the 45mph that the 20hp 2.9-litre four-cylinder Model T could achieve. Wills also offered the car with a range of bodies, including roadsters and five- and seven-seat saloons, and made extensive use of a resilient molybdenum steel - which was employed in numerous chassis parts, as well as the crank, connecting rods and springs.

Other advanced features included a three-speed manual transmission with reverse, an integrated gear-driven starter-generator assembly and magnetically controlled reflectors inside the headlight, which granted a dipped and a main beam.

As you might have already guessed, the A-68 also came with the world's first production automatic reversing light. According to a relative of Wills, he had a habit of reversing into fire hydrants in the dark - which, despite his best efforts, would typically remain unsurprisingly affixed to the ground while the car's bumper merrily restyled itself around them.

To avoid this issue, and to further make his cars easier to drive and to live with, Wills - in collaboration with engineer Cromwell Halvorson - designed and patented a new type of 'vehicle light' in late 1920.

'The usual lighting circuit for motor vehicles includes a source of power, headlights and a low-power tail light,' stated the patent. 'In the use of a vehicle provided with such a circuit, no means are provided for illuminating the roadway in the rear of the vehicle. It is often highly desirable in backing the vehicle at night to have an effective rear illumination.'

The result of their efforts was a switched system that, when reverse was engaged, would activate a white reversing light - illuminating the view behind the vehicle, highlighting any pesky fire hydrants or other hazards. This was made a standard feature on the A-68 in 1921; in Europe, companies such as Volvo wouldn't introduce automatic reversing lights until 1933, while the likes of Chrysler didn't make them standard-fit until 1959.

Despite this, the cars were well received - in part due to their smooth-running V8s - and demand was high. By October 1921, it was reported that as many as 30 were being built every day. More improvements would come, including hydraulic four-wheel drum brakes in 1924, but the writing was already on the wall for the company.

This was because the depression of 1920-1921 had taken its toll on the company's finances and the continual changes and new developments, spurred on by Wills, led to frequent production stoppages. This, unlike Ford's fixed designs and production regime, resulted in many a delayed order, many a disappointed customer and many a subsequently cancelled order.

While he unquestionably had the vision and engineering nous, Wills evidently lacked the restraint and management capabilities of Ford. When the recession hit in 1926, the company's battered bank balance could stand no more and the whole shooting match was forced into liquidation in 1927.

Few of the cars survive, alas, but many of their pioneering features would be emulated or used by myriad other manufacturers - and, in the case of the reversing light, also ultimately mandated by law, further solidifying the legacy of the Wills Sainte Claire company. The cars do pop up at auction occasionally, though; the pictured red 1922 A-68 Roadster sold at a 2015 Bonhams auction for $151,250, while the later B-68 Gray Goose Special sold at an RM Sotheby's auction in 2015 for $57,200.

Wills himself would continue to work in the automotive industry but, in 1940, he lapsed into a diabetes-induced coma . He died two days later, at the age of 62, in the Henry Ford Hospital in Michigan.