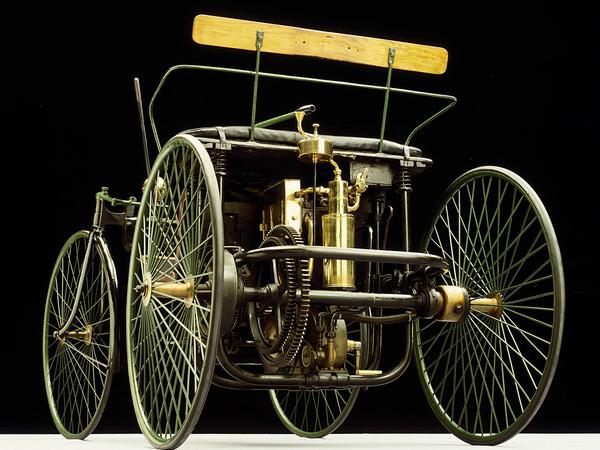 In 1880, technical director Gottlieb Daimler was fired from the highly regarded Cologne-based Deutz engine company. Truth be told, it came as somewhat of a blessing to the German innovator. He had never got on with Nikolaus Otto, who owned half the company, and a series of disputes over designs and patents had further soured their relationship.

Deutz itself was also only interested in producing heavy, low-speed stationary engines. Daimler, though, wanted to build smaller and lighter engines based on Otto's concepts - as he envisioned profitable applications of the technology beyond heavy industry.

While being fired wasn't the ideal outcome, it gave Daimler (pictured, at his desk) the opportunity to explore his dream of a 'universal' engine that could be used in a multitude of roles. In a gracious and beneficial move, Otto and Deutz also saw fit to compensate Daimler for his prior efforts and patents with valuable shares. Money, in the short term at least, would be no problem.

Unfortunately, for Deutz, the company's chief design engineer was a great friend of Daimler. Engineer Wilhelm Maybach, described as being able to 'invent things on command', promptly quit upon hearing about Daimler's ejection from the business.

The pair then established a new workshop in Cannstatt, a district of Stuttgart, with the aim of building compact four-stroke engines. There were many challenges to overcome, including developing an ignition system suitable for increased engine speeds - which would permit higher power outputs - but Daimler and Maybach's tireless efforts soon resulted in a single-cylinder prototype.

Their compact 100cc experimental engine barked into life for the first time in the second half of 1883 and, running up to a peak of 600rpm, it produced 0.25hp. For comparison, other engines of the era had often topped out at less than 200rpm. The prototype was so small that its practical uses were limited - even the casting foundry responsible for its block classed it as a 'small model engine' - but it indicated that the ignition, fuel and the design concepts of the time could permit higher engine speeds.

A reworked version was unveiled in 1884, which adopted a vertical configuration and a larger displacement. This engine, called the 'grandfather clock' due to its appearance, displaced 264cc and revved to 700rpm. Its bigger displacement and fractionally higher top speed permitted an output of 0.5hp, which was twice that of its predecessor.

This 60kg engine, patented in 1884, was the first of Daimler and Maybach's practical powerplants - and, in order to test it, the pair fitted it into a wooden two-wheeler. It had a two-speed pulley drive that permitted a choice of either 4mph or 7.5mph and conclusively proved, when tested in 1885, that the engine had the potential to power road-going vehicles.

Developments came thick and fast. The engine was redesigned again, upping its displacement to 462cc and enabling a maximum speed of 900rpm. It now produced just over 1hp but, usefully, it weighed in at a lesser 40kg. It was subsequently mounted in a carriage in 1886, marking the debut of Daimler's first motorised carriage. With the 'grandfather clock' hammering away, this early vehicle could achieve speeds of up to 10mph.

However, both Daimler and Maybach - to the delight of future enthusiasts - wanted more power. A more capable engine could propel a vehicle to higher speeds, or shift heavier loads, and improved flexibility would make the engine less difficult to operate. Consequently, a powerful engine would be easier to sell and more profitable.

There were limitations with what could be achieved with the valvetrain, cylinder head designs and ignition and fuelling systems of the day, though, so the engineers adopted an age-old practice - multiplication. After all, why have one when two is more? Putting two cylinders in a row was one solution but this would require an entirely new crankshaft, a new block, potentially new cylinder heads and more. The engine would also end up being longer, which could make packaging it problematic.

Instead, the decision was made to take the existing grandfather clock design and simply duplicate one of the cylinder assemblies - but, instead of positioning the new cylinder behind the existing one, it would be sited alongside it at an angle. This meant that Daimler and Maybach could retain the basic design of many well-tested parts and cut down on the number of new components required.

Such a design would also result in a compact two-cylinder engine of the same length of the original single-cylinder unit. It could easily be fitted, as a result, into any existing prototype chassis with minimal fuss. This new multi-cylinder engine, which was built and patented in Daimler's name in 1889, displaced 565cc and produced a higher 1.5hp at 650rpm. The angle between the banks was a tiny 17 degrees, resulting in a similarly tall and narrow look to the preceding single-cylinder unit.

As Daimler also pointed out in his patent, this increased output was attained with just 'the additional weight of the second cylinder, piston, piston rod and valve gear.' Daimler simultaneously patented the idea of putting one cylinder directly behind the other, too - along with several other concepts, just to cover the rapidly changing bases.

This new two-cylinder, narrow-angle 'vee' engine was perfect for a car that Maybach (pictured wearing glasses, alongside the new V-twin engine) had been designing from the ground up. This cutting-edge vehicle was designed to shed the converted carriage approach of the past and featured many innovations; it was equipped with a bevel-geared differential, a single brake, a four-speed gearbox and pivoting steering wheels. In a cunning move, elements of its tubular steel frame also served as the circuit for the engine's coolant.

This vehicle, known as the 'wire-wheel car', was unveiled at the Paris World Exhibition in 1889. To Daimler and Maybach's disappointment, though, few expressed much interest in the innovative machine. Not all was lost, mind; during the event, Daimler cemented a new partnership with a businesswoman by the name of Louise Sarazin.

Sarazin was the widow of French lawyer Edouard Sarazin, who had met Daimler while at Deutz and had been intrigued by the high-speed engine concept. He had subsequently negotiated a deal to import complete engines and had also begun talks with Emile Levassor, of Panhard & Levassor, to produce the engines in France.

Unfortunately, Edouard began suffering from an illness and asked Louise to complete the deal. He later died, at the age of 47, on 24 December 1887; Louise pushed on, as per her husband's request, and thanks to her grit, wit and shrewd business acumen, got Panhard & Levassor to begin producing engines under licence.

This move, which developed a series of long-standing relationships and helped establish the automotive industry, is also attributed by many with kick-starting French car production.

Peugeot and Panhard & Levassor, for example, subsequently unveiled their first cars in 1891. They both featured a similar design to the wire-wheel car and used the Daimler two-cylinder engine.

The compact and powerful engine was to prove a great commercial success, at any rate, even if you discounted its automotive applications - as Daimler's two-cylinder powerplant became popular for use in boats, generators, trams, trolleys, fire-fighting equipment and more.

It even led the way in motorsports applications. Both Panhard & Levassor and Peugeot entered the 78-mile Paris to Rouen race on 22 July 1894, which is often cited as the world's first motor car race. These cars, powered by 'Systeme Daimler' engines, secured joint first place - and a Daimler-powered Benz also ventured home in fifth.

The officials were impressed by the engine's effectiveness: 'The Daimler engine, developed by a skilled engineer from Württemberg, Mr Daimler - who was present yesterday in Rouen to share in the triumph of his work - has turned petroleum or gasoline fuel into a practical solution.'

Before long, countless other manufacturers began adopting the V-configuration layout due to its compact nature, power and design flexibility. Cylinder counts would rise, and the angle between the banks would change - more on those later, perhaps - but all would share their basic concept with an innovative little engine from 1889.