Ferrari's GT has gained two turbos and some much needed style. Harris delivers the verdict

Ferrari launches in the space of two months, eh? Those Italians must be paying me even more money now. Although the

did leave me with something of a conundrum because in theory I viewed it as the launch of an engine. For those of you asleep at the wheel, this is Ferrari's first turbocharged motor since the

, and it will form the basis of the engine in the

replacement. In many ways it signals the death of the normally aspirated performance car engine, because if Ferrari feels it has to switch to forced induction, you can assume pretty much everyone else will have to follow suit. Assuming they haven't done so already, which most of them have. 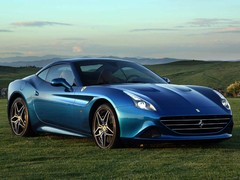 But what about the rest of the car? Before the

, I needed persuading of the

possessing any redeeming qualities - it truly was the worst car I drove in 2009 - but I thought the facelift was actually very good. And when a company can renew a gopping, whale-mouthed monstrosity like the original California into the T, I always reserve the vague hope that the same might be possible with the vehicle dynamics. The original California had the body control of a inexpertly set jelly.

So I went along ostensibly to experience this new dawn of Modenese turbocharging, but also with a lingering hope that Ferrari's SL rival might have become a proper Ferrari. Oh, did I mention that Ferrari has sold more than 10,000 Californias, making it the most popular production Fandango of all time? Proof, as in the case of National Socialism, that popularity is a poor denominator of quality.

Let's begin with the engine. Ferrari began the process of replacing the current naturally aspirated V8 back in 2008, spending much time and cash trying to create a turbocharged motor that would replicate the response, sound and free-revving nature if its atmospheric engines. Witchcraft, in other words. 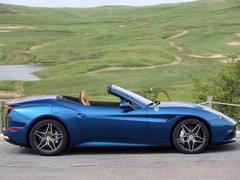 There are two seats squeezed back there

The result is a 3,855cc V8, running 9.5:1 compression and two twin-scroll turbos. Nothing especially new there, and the turbos sit snugly on the sides of the motor, unlike BMW's clever positioning within the vee for reduced pipework length and therefore improved response.

There's some real trickery in the actual header and exhaust pipes though - they're all of equal length, to a tolerance of a few mm, and the turbine is sandwiched between three special castings that are then connected and bolted to the engine. It doesn't look cheap. But then again, there's nothing revolutionary here.

That comes in the engine calibration work. This motor is clearly capable of producing more torque than the rear axle can handle, but Ferrari has seen its best chance to replicate the feel of increased power and performance as the revs increase. We're now accustomed to people limiting the torque of these new turbo motors in the lower gears, but Ferrari has gone a step further and mapped each gear with its own individual torque curve. When you ask the team how long it took, they instinctively look into the double espresso to their right. Especially when you consider how connected the powertrain is to the complicated electronic differential and stability control systems. 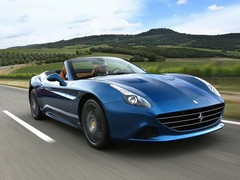 So this really is some trickery - artificially limiting the performance available in lower gears to give the sensation of needing to rev the motor out above 6,000rpm to enjoy peak power. It sounds a bit contrived because they've actually shaped the torque curve of every point in every gear to give the feeling they're looking for. The conundrum came in the higher gears, where they've chosen to let the turbines properly breathe, leaving the car with potentially similar roll-on acceleration in several gears.

To give the sensation of really hanging onto a gear, the ratios are much longer than before, with sixth now matching the old seventh, of course there's now enough torque to support such legs and the mapping allows surge to build as per a normally aspirated engine. The California T is just one great confidence trick, which had some of my colleagues in something of a froth, but if the results on the road make for a great drive, and the throttle response is good and the noise is proper Ferrari, I don't really see the problem.

There are other benefits. This motor is very compact with the crankshaft 110mm lower within the overall depth of the engine compared to the old N/A unit, and it sits lower too, the cumulative effect being a 30mm reduction is the centre of gravity of the motor. That's quite a lot. The claimed efficiency gains are 15 per cent in overall consumption, now up to 26.9mpg. I firmly believe that people who buy these cars don't care so much about consumption as they do range. The tank remains 78 litres and the test drivers say 300 miles between fills is about right. 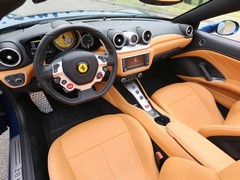 Soft dampers and Sport on Manettino is just right

Moving away from the engine, the T carries a comprehensive list of modifications. Every body panel apart from the roof mechanism (which is carried over) is new. Spring rates are up, the adjustable dampers are new, the carbon ceramics are the latest spec, as are all the chassis electronics. Quite a big change to be summarised with the letter 'T'. Mind you, last time Ferrari added the Tango moniker it moved a V8 transversely in the back of a Mondial, which probably wasn't the work of a single afternoon. T must denote 'tossing hard graft'.

Is this new motor the work of the devil? It's quieter on start-up, certainly. The exhaust parps, but less than in the old car and far less ostentatiously than in a 458, but it immediately sounds like a flat-plane V8 and that's all good for me. As I've said many times, all this start-up racket is too much for me, and this car's supposed to be a more refined GT anyway.

Pull the right lever to grab first and you roll away with minimum fuss. One day soon I might stop marveling at the way these dual clutch transmissions have revolutionised slow progress in the fast cars, but for now I'm still in awe: 560hp and it's really no more difficult to drive than a piddling hatchback. But that's what everyone expects these days. The market assumes the sales explosion at the very top end of the market is down to increased global wealth, but is it also partly attributable to ease-of-use? Ergo, is the DSG, DCT a notable part of the sales funnel? For going fast and slow, this is a masterful transmission - right up there with the Porsche 991 GT3. 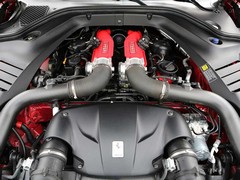 557lb ft, but only in certain gears

I digress, and we mooch out onto some Tuscan roads with the all important 'bumpy road' button pressed for soft damping. But with the little Manettino switched to Sport for faster throttle and gearbox response, the soft damper mode is actually harder than in the comfort Manettino mode. But not as hard as full Sport damping. Capiche? Me neither.

Five minutes later, assuming like me you have a good working knowledge of the old California, you'll be pretty amazed by what they've done here. The chassis is miles better than before. Set to soft, the dampers are supple and good up to around eight tenths, whereupon the car loses some dignity and begins to lurch a little and kiss the suspension stops - but for me that's about right in an SL rival. In the stiffer mode, you lose a good deal of the comfort and gain support at higher speeds, but you really do have to be driving like a loon to find those limits. I left it in bumpy road mode.

Can you tell the car is turbocharged? Yes, but only if you demand absolutely immediate throttle response in an almost unnatural, repetitive manner. It feels linear, is receptive to very small alterations in throttle position and the mapping strategy just works. Initially I was unsure because the car felt a little lacking in mid-range in second gear, but then I switched all the chassis gubbins off and had a glimpse into what the next generation of fast RWD cars will be like. Because in the Cali T, torque has been mapped not only for subjective feel, but to match available traction. It feels entirely natural as the rear begins to move around a little and much more delicate and therefore easier to balance than, say, an SL63 which just dumps most of its torque into tyre smoke. 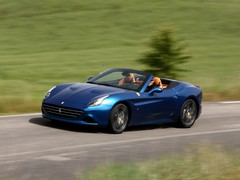 Not Harris driving. It's straight, for a start

And the noise is just fine. I say just fine because

I've never been that into the Ferrari V8 noise - search beneath the fancy exhaust valves and it's more four-cylinder than V8. So the starting point for me is quite ordinary, and adding blowers doesn't do much damage. It's a little quieter than before, but boss-man Felisa admits that the company's GT cars probably need to be a little less raucous because the customers find them a touch noisy. Expect a more subtle sounding FF sometime soon - I'm in favour.

The longer gearing and controlled torque-release really works in second and third because you feel like you can hang on to a gear and let it rev out to 7,500rpm - although peak power is actually at around 6,000rpm. The charade is exposed when you snick up into fourth at low revs and push the right pedal because subjectively the thing feels just as potent as it did in third. Likewise in fifth as yet more torque is allowed to work. You can either view this as unholy and evil; or an engine that can play fast, revvy and responsive in the lower gears and then pull like a monster in higher gears with little effort. In this car, it works brilliantly. 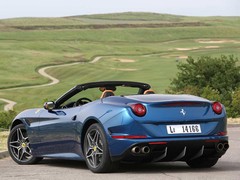 But how will it work in a car like a 458? You'll miss the razor-throttle much more. The high gear torque will seem more unnatural, and the noise will be much more of an issue. But you just get the feeling that this first turbo experiment is a stepping stone and the engineers will deliver a further step for the new mid-engined car. There are rumours of 4 litres and, in testing, power figures reaching 750hp. Expect less for production, purely to give the more expensive V12 cars a chance.

Back to the Cali - the faster steering is still aloof, but not as much of a problem as I'd expected. Roof down, there's more buffeting than in an SL, but it's still a great cruiser and the cabin is covered in very expensive former cow. The two rear seats are now standard because so few people opted for the rear bench last time. The roof goes up and down, not much more to say about it than that.

So I went to sample perhaps the most important shift in Ferrari powertrain philosophy in the company's history, and came away not remotely worried about the future. But I pre-judged the California as being the same non-Ferrari as its predecessor and was quite wrong. If I couldn't stand the last one, taking into account the fact that I now really like the way it looks, it's now a properly fast car (0-125 in 11.2sec) and can play the cruiser when you want, it's the best facelift I've encountered. It even has a couple of spots in the back for the school run, knees-on-chest. God, I could quite like living with one.