"The Fiesta isn't the most practical small car around, but it crams a decent amount of space into a compact package... Access is fine - although... even the five-door isn't as easy to get in and out of as rivals, such as the Honda Jazz and Nissan Note". There you go. That's the

on five-door versus three-door Fiestas. Why use that verdict? Because, in all honesty, nobody got in the back during our time with the

. The doors were opened to wind (remember doing that?) down the windows, but otherwise it was just driven. And driven hard. 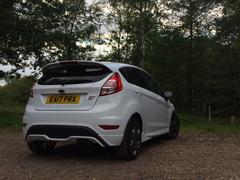 Stopped only to prove it does have five doors

How could you not? Since its launch

the ST has garnered a (popular) reputation for being a right little rascal of a hot hatch, fizzing with energy and bristling with cheeky attitude. It's worth noting actually what an achievement this car is, what with Ford's fairly average track record with fast Fiestas: the last ST wasn't anything special against contemporary hot Clios, the fastest model of the Mk4/5 had 105hp (though was rather good) and before that you're back into cars like the XR2i. Yuck.

So while Ford has been producing some great handling cars for more than 20 years now, to have a genuinely great fast Fiesta came as something of a surprise in 2013. With the replacement imminent now seemed the right time to be reminded of how good this little car is, as well as what the new version needs to improve on. 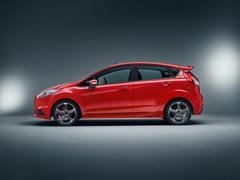 Well it's still brilliant, put it that way. It's also still impossible to drive slowly. Partly this is to escape the ride - which is really quite tough at urban speeds - but also just because the ST is constantly goading you into thrashing the wheel nuts of it. The steering is super sharp, the car darting without delay to the next corner. That stiff suspension also means real agility at speed too, this Fiesta just incessantly eager to get down a road. Combine that with a gutsy little engine, powerful brakes and a slick gearbox and you're not far off hot hatch nirvana.

The ST's silly side extends as far as you want it to as well, the chassis mobile and adjustable to your heart's content. It's responsive to a lift of the throttle, a dab of brakes, a slightly too big a dab of brakes... it's the traditional hot hatch sense of humour, modernised and re-energised with a safety net if you need it too.

It's not perfect though, and rivals introduced since 2013 have highlighted a few ST issues. Though more expensive, the 208 GTI by Peugeot Sport feels the more finely honed and faster hot hatch; its limited-slip diff and suspension tuning give it an additional layer of composure compared to the Ford. And while people will continue to belittle it, the Clio 220 Trophy has a fine chassis and a far nicer interior than the Fiesta. 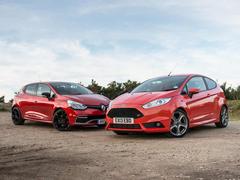 Yep, it really has been this long

For sheer entertainment though, and for the value for money it represents, the ST remains a very difficult package to argue against. All of it just feels so in balance; it doesn't need any more power, any more grip or any more braking performance. Everything is just right to have a huge amount of fun at sensible speed for not a lot of money - and isn't that what hot hatches are all about?

Room for improvement
Now the new Fiesta ST, a three-cylinder Fiesta ST don't forget, isn't that far off. We know what it looks like and we also know that it has what seems to be a much more appealing interior. What else does it need to improve? A touch more compliance around town would be handy - though it shouldn't be at the expense of that feisty attitude - and it would be nice if the new 1.5-litre engine was a bit revvier than the current 1.6. While the latter engine sounds good and pulls hard, it doesn't have the energy at high revs that something like the Peugeot does. 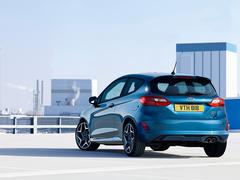 They're small problems though; Ford could just as easily give the current car an interior refresh and it would still be extremely competitive. Regardless of what that new car is like though, its arrival does guarantee one thing - cheap old ones! Just in case they weren't already tempting enough...

The earliest cars are now less than £9,000, with this 17-plate ST3 at £16,390 with just 100 miles on it. What more do you need?! Due for replacement or not, three-door or five-door, the Fiesta ST is absolutely still one of the best. We await its successor very eagerly indeed.