OK, there may be some chuckles out there. This tweaked version of Honda's S660 Kei-coupe may look like an experiment for Transformers meets Speed Racer but Mugen's upgrades show off everything both parties do so well. And within a couple of years an upgraded, quicker and more serious version could be landing here.

The base Honda S660 is already one of the most highly engineered baby sports cars on the Japanese market. A unique chassis, bespoke 660cc turbocharged engine, quick-fire six-speed manual and specially developed Yokohama Neova tyres make it arguably the best-handling Kei car yet, harking back to the old Beat. 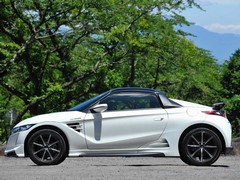 Honey I shrunk the NSX

Bring that beat back

Mugen and Honda have a long history together on track, with race powertrains for Japaneses Super GT and Super Formula series, F1 heritage (more worthy of celebration than current efforts) and a thriving business selling styling accessories and performance upgrades for Honda road cars and minivans. And in the Mugen S660 we perhaps have a clue of what's in store for the wide-bodied, 1.0-litre turbo S660 variant apparently under development for international markets.

Mugen's relationship with Honda is different from in-house rivals like NISMO or Toyota's TRD, meaning it has access to S660s but customers in Honda dealerships can only buy tuning parts, not complete cars. They do happen on occasion though. There were tuned versions of the NSX, Accord and Odyssey with the occasional escapee from Japan like the gorgeous FD2 Type RR making it to these shores. European-built cars like the supercharged CR-Z and glorious FN2 Civic Type R add to the mix but the last complete Mugen was the CR-Z RR concept of 2012. Properly exotic stuff though and not a moment too soon for another, with the added excitement of a rumoured Mugen version of the new NSX. 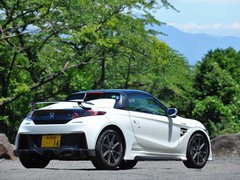 So what do we have for the Mugen S660? Lots of bespoke parts and lots and lots of vents on the carbon bonnet and restyled side panels. Everywhere, really. Aero too, in the shape of an integrated front splitter, further venting on the wings to suck air out of the wheelarches GT3 RS style and a fixed rear wing to replace the one that usually deploys at 70km/h on the standard car. There are also unique lightweight wheels with Yokohama Advan tyres, 10mm out of the ride height, new dampers and springs and Mugen slotted brake discs gripped by uprated brake pads. Finishing it all off there's a sports silencer, complete with your choice of carbon or titanium trim.

All of this doesn't come cheap, lifting the starting price of around 12 grand to nearly £21,000. Mugen to the max!

Bringing us to that huge power upgrade over the standard, Kei-mandated 64hp you were no doubt keen to hear about. About that. There isn't one. But there are differences in how that power is delivered, thanks to a Mugen optimised six-speed manual gearbox to flick through via the super-stumpy carbon shift knob.

64hp might seem more appropriate for powering a lawn mower but by making the most of that limited power through the precision of the short-throw shifts and keeping the engine spinning between 5,000rpm and the 7,700rpm redline you can make the most out of it and corner faster than a (relatively) grown-up sports car like the new MX-5. And where the S660 was already a blast the Mugen jumps into a new dimension. 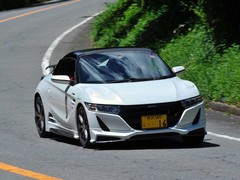 Corners all about momentum with 64hp

As standard the S660 depends heavily on its tyres to counter a tendency to lean and then lurch into an eventually more stable cornering stance. The stiffer Mugen springs and firmer dampers take the ride quality in a harsh direction but turn-in is much more precise, it corners flatter and that rear axle seems more in tune with what the front one is doing too. Brake pedal feel is improved too, biting earlier and requiring more subtle inputs to modulate but full of power.

Inevitably you crave more grunt and in its home market owners are finding an ECU and exhaust upgrade develops an 'easy' 80hp. An export version is going to require than that though, hence talk of the international market S1000 with around 130hp and a power-to-weight ratio and price able to stand comparison with rivals like the MX-5. We'll look forward to that but in the meantime the idea of a standard S660 with a few choice picks (the brakes and suspension spring to mind) from the Mugen catalogue makes a very appealing prospect.