The notable absentee from

of the Honda Civic Type R and Megane 275 Trophy was the third member of the Nurburgring hot hatch 'sub-eight' club - the SEAT Leon Cupra. Handy then we have recent experience of it in 'Sub8' guise on the same roads... 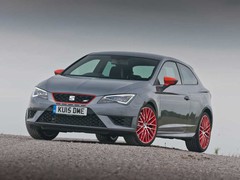 Is that a bit of Cupra flair creeping back in?

The efforts required to get a hot hatch around the Nordschleife in less than eight minutes are revealed in some of the skulduggery uncovered when properly scrutinising the claims of Renault, Honda and SEAT. The Spaniards were the first to stake a claim with a 7min 58sec in what turned out to be a slightly

Leon SC Cupra 280. Cue some hasty back-pedalling and the promise that - eventually - a

exactly replicating that of Jordi Gene's stripped out, Cup-tyred and Brembo braked development car would be offered to buyers. SEAT has since learned the hard way bringing such a car to market isn't quite as easy as it sounds.

Then Renaultsport calmly chopped four seconds out of the time and claimed both the record and the ability to sell a car exactly to the specof the one used by its driver Laurent Hurgon. The moral high ground comes at some cost though, the bottom line £39,300 including a lithium-ion battery and rear wiper delete to chop out those final few kilos. 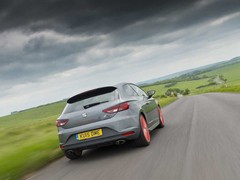 "Hey you guys, don't forget about me!"

. The car has done a 7min 50sec, conspicuously caged up and lacking certain components. Like a passenger seat. So SEAT was the first, Honda is the fastest and Renault is the only one selling a car that exactly matches the spec of the one that set the record.

Does any of this actually matter? Not really. But as a point of honour it's reasonable to expect performance claims used as key marketing tool are reflected in the product you can actually buy, right? Being bloody minded does come at a cost though - £4,200 and the loss of vents, speakers and various other interior bits and bobs for starters. That turns your £27,910 Gene-spec manual Leon SC Cupra 280 into a £32,110 car with "simpler heating" in place of the climate control, half the number of speakers and no centre armrest. Like all 280s you also get his chassis and engine settings by pressing the 'Cupra' button. And unlike the nearly £40K 'ring spec Megane Trophy-R you do get to keep your back seats and semblance of daily usability. In return you get 30mm bigger front discs and Brembo calipers, Michelin Pilot Sport Cup 2 tyres (as used by the Megane too) and different multi-spoke 19-inch wheels.

This isn't that car. This is Leon SC Cupra with the basic Sub8 pack of the wheels and brakes which adds £2,050. The stage two with the Cup tyres is £2,510 and the dealer request/SC only stage three 'Ultimate Sub8 Performance Pack' as listed above the full £4,200. And if not as extreme as the items in the Megane or Civic you can have sportier Cupra seats for another £1,265.

That's an awful lot of talk before even turning a wheel. Time to hit the road! 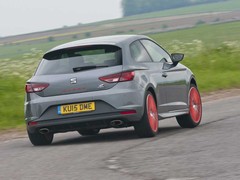 Anyone hoping for a transformative effect from the Sub8 pack is going to be disappointed, at least in this most basic form. Because, in essence, it's a standard 280 with some bigger brakes hidden behind wheels that reveal themselves to be a right sod to clean brake dust out of on photoshoots. Feel our pain on that one.

It'd be nice to say the Brembos offer improved modulation and feel over the rather grabby and typically over-servoed standard items but, on the road at least, you're not really in that operating zone. The pedal does feel more firmly weighted, progressive and - ultimately - more powerful than standard but you'd have to be on track to really feel the benefits. Experience of the Cup 2 tyres on the Megane suggests the additional sidewall stiffness and bite makes for a much more positive front end on turn-in.

But we can't report back on that because our car didn't have them fitted. Bah! And, as per the standard 280 we ran on the PH Fleet, the typically conservative VW group mindset means the SEAT is set up with a healthy amount of initial understeer to deter further exploration of the car's limits. Which is a shame on two counts. First if you were test driving it back to back with the pin-sharp Megane and Civic it feels immediately a bit vague and mushy. And, second, beyond this the Cupra has a very clever, capable and adjustable chassis. 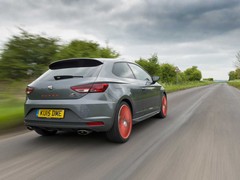 More stylish than the Megane and Civic, right?

Keeping your foot in as the car wants to plough on is counter intuitive but once the VAQ 'diff' wakes up the ability to distribute the drive torque means it actively pulls the front end back into the turn. It's a slightly unnerving sensation and one you can see Gene using on

but with this, the three-mode dampers and the multi-link rear end (both the Renault and Honda use twist beams) there's real engineering credibility underpinning the SEAT.

It's arguably got the best combination of parts of all the hot MQB cars too; nearly as much grunt as the Golf R and the most effective half of the Haldex drivetrain but 80kg less weight. Plus more power and a cheaper starting price than the equivalently equipped Golf GTI. Even its artificial noise seems less intrusive. And with the optional Orange pack it's a step closer to the more extrovert image fast Cupras of old wore so well.

As it stands then the Cupra is probably the least focused and hardcore of the three sub-eight hot hatches but also the least compromised for everyday use - remember you can have it in three-door, five-door and estateversions with the choice of manual or dual-clutch gearboxes according to need. It's also arguably the best value and probably the pick of all the many and varied hot MQB derivatives, up to and including the Audi RS3. With the ability to - finally - buy a car that lives up to the considerable hype, there's a welcome sense of honour satisfied for the Leon Cupra.

See the trio of 'ring laps below!